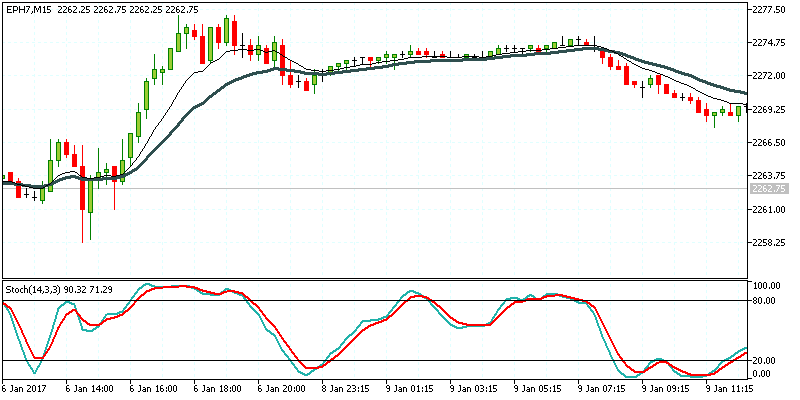 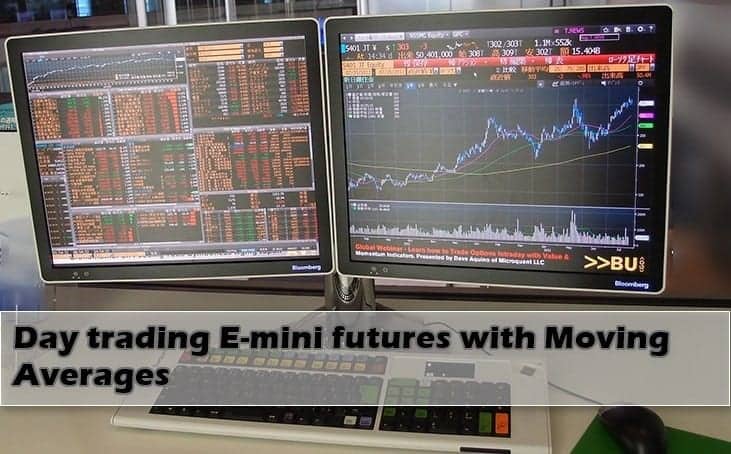 Moving averages are one of the simplest and universal technical analysis indicators that are widely used across different markets and time frames. While the indicator can often be dismissed for its age or its simplicity, the fact that moving averages are widely used in the markets today is perhaps a testament to its importance and relevance in the markets even to this day and age.

The moving average was and still is, in fact a technician’s best friend since the days of charting by hand. As technology evolved and computers took over, the simple and trusty moving average has managed to evolve into the many different versions of moving averages that we come across today.

Moving averages are primarily classified into the following types, which are the most commonly used types of moving averages.

A simple moving average, as the name suggests is a very basic statistical measure and provides a quick and easy way to find general level of values in a data set. Calculating the arithmetic average is quite simple. The sum of all the values in the data set is divided by the sum of the number of values. 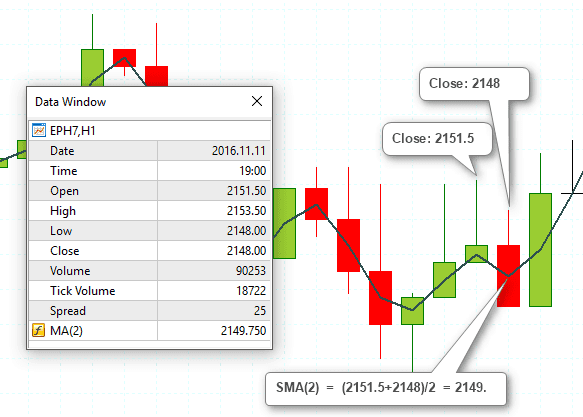 In the above chart the Red line shows the 50-period exponential moving average and the Black line shows the 50-period simple moving average. On a normal chart (no gaps or volatile price movements), both the EMA’s tend to print nearly similar prices. However, once you factor in volatility such as price gaps, sharp movements in prices, the SMA and EMA start to diverge. While the SMA continues to print a steady moving average line, the exponential moving average becomes more sensitive to prices and as a result the EMA also shows volatility in the average prices that are plotted.

When traders make use of two moving averages, the crossovers off the short term and the long term moving averages can signal bullish or bearish trends.

Among the different periods for the exponential moving average, the 10 and 20 period EMA’s are the most common. The values simply represent the recent 10 or 20 prices (open, close, high or low) on the price chart. When applied to the daily time frame, the 10 and 20 periods EMA simply show the monthly and half monthly average prices.

It can also be used on 1-hour chart and can depict the short term intraday trends in the market. 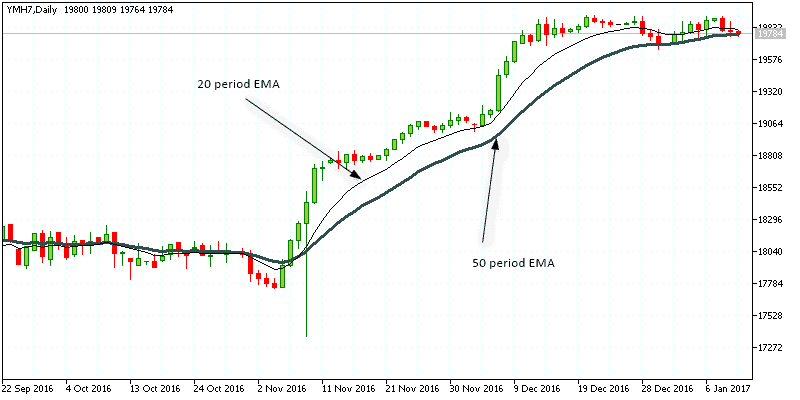 Besides being used a trend indicator, the moving averages can also serve the purpose of identifying potential support and resistance levels in price. When a trader can find such levels and combining this information with the moving average, a simple yet robust trading system can be formed. 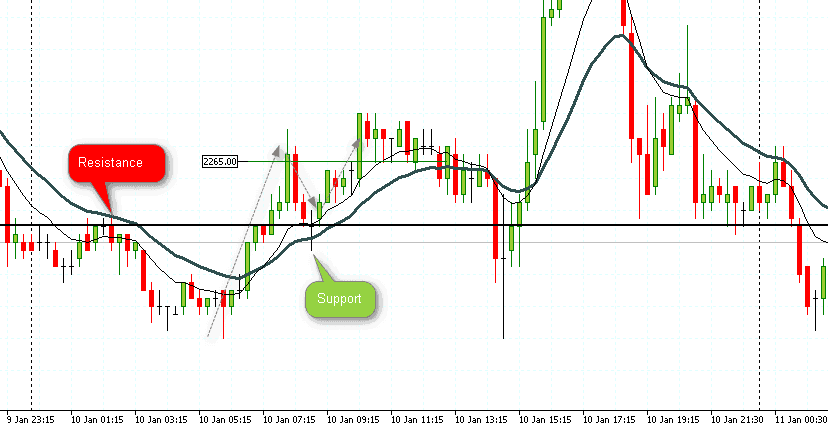 The above chart shows one of the ways the moving average indicators can be used. Starting from the left, you can notice the resistance level that was formed by a bearish reversal in prices within the downtrend indicated by the 10EMA trading below the 20EMA. Few sessions later, the 10EMA rises above the 20EMA to signal bullish sentiment in the emini futures market. After a brief rally, price pulls back right to the previously identified resistance level when support is formed. This is also marked by the doji candlestick pattern and a bullish candlestick there after indicating a bullish continuation in prices.

Following the bounce off this old resistance forming to new support, price makes another attempt to rally before starting to slip back. You will also notice how in the few sessions later, price posts another reversal but with a lot more volatility near this identified level.

The different types of uses for the moving averages have made it one of the cornerstones of many trend following strategies. Typically, moving averages are also used alongside technical oscillators such as the Relative Strength Index (RSI), Moving Average Convergence Divergence (MACD) or the Stochastics oscillator, all of which aim to capture the rise and fall in momentum. Combined, the MA’s and the oscillators tend to provide a fairly robust picture of the markets and help in determining to pick the dips and rallies in a trend.

To conclude, the moving averages might be easily dismissed by some traders for its simplicity and its antiquity. However, the indicator has stood the test of time and is derived from a simple piece of math and the general logic surrounding it. Now-a-days, there are many different versions of the moving averages which claim to offer something new for traders. It is not surprising to find traders continually look for the latest improvement to the moving average, when the fact remains that the simple and exponential moving averages are probably one of the best indicators out there.

Due to the fact that some EMA and SMA periods such as 200, 100, 50, 20 and 10 are so closely watched by most traders, it has become a self fulfilling prophecy. For day traders who are just getting started, the moving averages (whether you are using the simple moving average or the exponential moving average) are probably one of the best places to start in your technical analysis journey.

When starting out in trading, there are a barrage of indicators thrown at you, all with promising strategies tied to them. The exponential moving average is sure to be one of them. Along with the...