How to Trade with Support and Resistance Levels 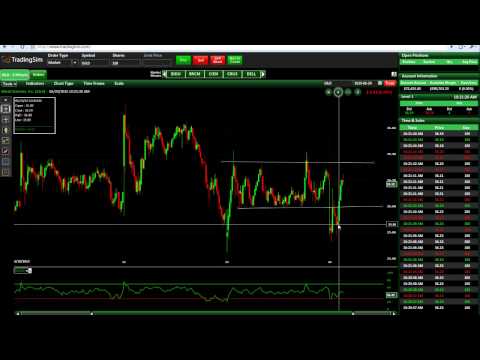 Defining the concept of support and resistance is fairly simple. When discussing it in the context of the stock market, it defines the levels at which buyers and sellers step into a market or where the law of supply and demand come into play. Imbalances in supply and demand create stock support and resistance levels. For example, when an overwhelmingly high number of buyers (demand) step into the market, an indication of support is being put into the market. Conversely, a large number of sellers (supply) indicates that there is overhead resistance preventing the stock from moving higher.

Stock support and resistance can come in many forms:

Blow off tops or panic selloffs can put tops and bottoms into markets and mark important support or resistance levels for a stock.

An increasingly popular technique for determining support and resistance can be derived through the use of Fibonacci levels. These levels are viewed by some as imaginary levels but have now developed a strong significance due to their widespread use. It is almost a self-fulfilling prophecy which causes prices to stop and reverse at these levels.

Speaking of imaginary levels; many traders, especially day traders, use whole numbers to define stock support and resistance levels. Decade ($10, $20, etc) and century numbers ($100, $200, etc) are looked at very closely by many traders.

Many traders also use trend lines and other technical indicators such as the RSI, slow stochastic, moving averages, and CCI to derive logical levels of stock support and resistance.

Gaps often act as magnets for prices; for example, if a stock opens down 3 points in the morning, that price gap will most likely be filled at some later point. The close of the bar prior to the gap is considered to be support on gap ups and resistance on gap downs.

While all of these are important, let’s take the time and focus on point #1 above. The other four points have been discussed in detail in other articles and can be viewed by following the links above.

Example of Support and Resistance in Action with Volume

Blow off tops and panic sell-offs are a result of extreme movement in price and volume in a stock. They signify massive shifts in ownership and can provide very strong support and resistance in a market. Let’s take a look at an example. We are going to take a look at a trade that we actually were involved with back in 2004. Sirius Satellite (SIRI) announced that Howard Stern was going to move over to their platform and the stock catapulted much higher in a very short time. Let’s review the graph.

Look at point A on the graph above. Notice that SIRI moved from $2 to $4 with climactic volume. The expansion in volume and price created a large imbalance between buyers and sellers and once it ran its course, it set up a resistance level that took 9 months to penetrate. Typically after a blow off top, an immediate response will follow in the opposite direction due to profit taking and new shorts speculating that a top is at hand. The low point put in, as seen at point B, is called an “automatic reaction”. Automatic reactions are typically fast and swift in nature just as the preceding up move was. Points A and B now set up your range of support and resistance that you can expect the stock to trade within until an indication is made by the stock that it wants to break out of the top or bottom. Moving on to point C; frequently, you will see a re-test of the blow off top (A), this is commonly known as a “secondary test”. In our case, the secondary test came in with lower volume and failed to take out the price highs that we set back in January ’04.

SIRI failed at the $4.20 level and moved back down into support at around $2.50 and actually broke through our support area designated by point D in the graph. The zone highlighted in blue is very important because it is a false break to the downside. This break came on very light volume and then moved right back into the trading range in early September. This indicates to us that a move back to the top of the trading range may be in store. Point E was just that. SIRI bursted up to $4.20 with strong volume and actually penetrated the level by a few pennies before reversing lower again. This test was very telling. The increase in volume over the January levels told us that the buyers were strong and looking to push prices higher. We should now be on watch for a break higher.

SIRI had now set up a triple top at the $4.20 level. The price action between points E and F were of strong significance. Notice how the price retracement off that high was shallow and notice also how volume contracted by quite a bit as well. Price was rejected but not severely. SIRI refused to go lower and went right back up to the $4.20 resistance level and closed above it. This confirmed a breakout on the chart. Notice how the stock moved significantly higher into point G where it set up an island top candlestick reversal with gigantic volume. This was the beginning of the end for this stock and these levels were never seen again.

Our expectations for this stock were slightly higher due to the nature of the trading range that the stock was within. We are talking about the the relationship between “cause” and “effect”. In a nutshell, the greater the preparation, the stronger the result. We have to keep our charts in perspective, a shorter term formation will most likely not produce as dramatic a result as a longer term formation such as the one we discussed above.

Not an Exact Science

A few key points we want to mention regarding trading ranges. If a stock moves out of its support and resistance boundaries with heavy volume, you are possibly looking at a shift in the character of the stock. For example, if a stock moves up through the top of its range with heavy volume, it is indicating that the buyers were able to take hold of the stock and overpower the sellers at that level. This is bullish and the former resistance level should now be considered as support on a pullback. You can almost look at it as if the bulls claimed victory at that price level.

In conclusion, you must study how a stock behaves at key support and resistance levels and take note of climactic increases in volume as it typically is associated with panic or extreme levels of greed. This is a good time to look for take the opposite side of the primary trend. Remember, climactic volume eats up a large amount of buyers and sellers and tends to produce sharp snap backs in either direction as buyers have put in major support and sellers will have put in major resistance going forward.

2 Simple Strategies for Trading with the Chaikin Money Flow Indicator

Hi Guys, I’ve put a quick video together on a great trade from earlier in the week.  The trade illustrates how you can use key support and resistance levels on the larger timeframe charts (daily,...

5 Ways the True Strength Index Keeps you in Winning Trades