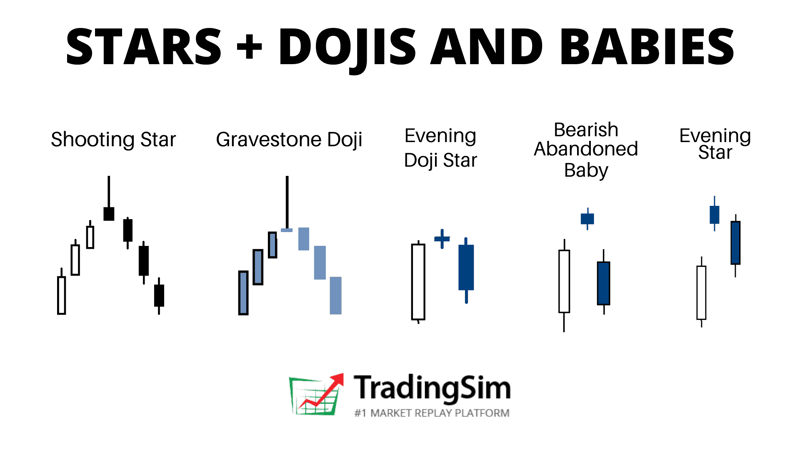 Candlestick patterns can have some crazy names sometimes. Stars, dojis, and abandoned babies? The Japanese were fond of naming candlestick patterns after real-life visual representations. Shooting stars, morning stars, evening stars and abandoned babies are all examples of indecision reversal candle patterns. We’ll introduce you to them in this post.

If you haven’t checked out our complete explanation of candlestick patterns, be sure to do so. In it, we cover the construction of a candlestick chart, the history of candlesticks, and common candlestick reversal patterns. It also has a link to a free cheat sheet that includes the stars, dojis, and baby patterns.

What are Candlestick Stars?

As noted above, stars are a type of indecision candle. Typically we want to trade them as a powerful reversal pattern. But as with all candlestick patterns, context is everything.

The key rule to a star is that its real body does not overlap the previous candles real body. There are several variations of the star pattern:

Stars will typically have a small body. This is particularly important for psychological reasons which we’ll get into in a moment. But for now, suffice it to say that stars usually open and close very tightly.

Of course, these candles can appear anywhere on a chart. With the examples below, we’ll teach you the proper context where they should appear for profitable reversal patterns.

On a daily chart, the Candlestick Stars will typically appear with a gap at the highs of an extended run, or the lows of an extended sell-off. This is the key to the reversal patterns

Candlestick Stars will typically be associated with increased volume at these climactic ends as well. This also is part of the psychology of the pattern.

Psychology of the Candlestick Star Pattern

As a star has a small real body, it represents indecision by bulls and bears.

Think about it this way:

When a stock is trending upward aggressively, strong hands and institutions will be selling into that strength. Meanwhile, retail traders may be buying here unaware that the stock is about to turn.

Likewise, because the stock is so extended, short sellers will be initiating their positions as well, adding more supply to the stock.

As all of this occurs at once, we get a star candle that can’t seem to make up its mind on moving higher or lower. A lot of activity, but not much movement in either direction. That is, until the next candle.

While the primary trend is still intact, the presence of the star is the first sign that the trend could turn. Think of it like a crossroads.

It is the second candle that will tell us whether the reversal pattern is confirmed or not.

The morning star candle is a bottom reversal signal that comes after an extended downtrend.

This pattern is a three candle reversal setup. The first two bars are the typical star setup discussed above. The major difference with this pattern is the third candle in the formation.

It is a very strong green candle, which does not have to be a gap and closes at least halfway into the first candle.

Assessing the Strength of the Morning Star Signal

The further the green reversal candle closes into the first bar (the red bar preceding the star), the more bullish the formation.

On that note, outside of the morning star candlestick pattern revealing itself, look for other indications that this pattern is confirming. For example, you want to see high volume in the third candle, indicating strength.

Additionally, the morning star works very well when it occurs at previous support levels. The more criteria you can find, the better.

On the other side of the coin, if you buy a stock that prints the morning star, be prepared for some sort of pullback.

It is not uncommon for that to happen nearly 50% of the time. If there is a violation of the lows, then the morning star is failed.

Let’s take a look at the morning star candlestick at work with a live trading example.

This is a beautiful morning star setup.

First of all, the morning star came in at previous support near the 60.37 level. The star candle came in the form of a hammer.

Refer back to our Candlestick Guide to learn more about the hammer.

There was high volume that came along with the hammer, and this was an even bigger sign that this level would hold as support. The following day, the stock accelerated with a gap higher and closed well into the top half of the first bar.

As mentioned earlier, the presence of this pattern does not indicate an immediate rally. As you can see, the gap created from the second to the third bar was backfilled.

Smaller gaps, such as this one, tend to fill in the short term. Even if one had waited for the high of the third candle in morning star to be broken above, five points could have been made in that short amount of time.

The evening star candlestick is the bearish version of the morning star.

It is a top reversal pattern that occurs after a sustained uptrend. The evening star is also a three candle pattern.

Again, as with the bullish morning star, the third candle in the evening star does not have to be a gap.

Here are a couple of factors that increase the chances of this pattern succeeding:

Just as the lows of the morning star pattern provide support, the highs of the evening star candle formation serve as resistance to any further upside movement.

A candlestick doji pattern is a candle that lacks a real body. This means the open and close of the bar are essentially the same. It has a strong significance after substantial advances or declines.

The lack of direction is a potent reversal signal, especially if it is followed by a candle in the anticipated direction, and at the end of a trend.

Notice, the Evening Doji star image above is an abandoned baby top, while the morning doji star is not. We’ll explain why below.

Another extremely powerful version of the doji star is the abandon baby top or abandon baby bottom. This pattern is the equivalent to what some know as the island reversal.

The abandoned baby candlestick has a doji as the second candle with a gap on both sides.

If you think about the psychology of this setup, the first gap came in an exhaustive fashion.

The stock was already in a strong uptrend or downtrend, and then it made a gap which closed near its open. This was the first sign that the directional pressure was fading.

Now, with the third candle gapping in the opposite direction of the trend, we have confirmation that a more significant trend reversal has taken place.

The shooting star has a long upper shadow with a small real body at the lower end of the candle. This pattern usually presents itself as a sign of a short term correction rather than a more potent reversal signal.

Along those lines, it is telling us that the market’s rally could not be sustained. The market opened at or near its lows, shot up much higher and then reversed to close near the open.

Ideally, the real body of the shooting star should gap away from the previous candles’ real body. While it is not necessary, it adds confirmation to the validity of the impending reversal.

Why? Again, it all has to do with exhaustion in either direction.

Additionally, take a look at the previous candles; many times you will see overhead shadows on those candles as well. This indicates that the stock is struggling to go higher; just another clue as to what might happen.

As mentioned before, the shooting star is a short term topping formation, and any break above the high of this candle is a failed confirmation.

This formation is more powerful than the typical shooting star and portends a more serious reversal.

Candlestick patterns are a great way to assess the trend of a stock. The key to its secret is the fact that candlesticks are a visual representation of price action.

These reversal candles can help the astute trader anticipate a trend change or continuation. Just remember, you need other validation points. These can come in the form of a technical indicator or other chart patterns.

You can use Tradingsim to scan the markets and locate these candle reversal patterns. You can then apply your own trading strategy to find the optimum setups for profits.

Work on developing your own specific rules for entries, stops, and targets.

As always, be sure to ask yourself the following questions when practicing any setup:

Learning chart patterns might be the fastest way to making consistent money in the stock market. For centuries, the market has displayed the same characteristics, over and over again. After all, it’s...

The shooting star is a single bearish candlestick pattern that is common in technical analysis. The candle falls into the “hammer” group and is a first cousin of the – hanging man, hammer, and...