What is the Kicker Candlestick Pattern?

The kicker formation is a reversal pattern that starts with a candle in the direction of the primary trend, followed by a gap contrary to the trend.

Talk about being caught on the wrong side of the trade if your judgment is off.

The pattern symbolizes a strong change in the investor’s attitude about the stock. This usually happens due to the release of crucial information about the company.

There are two types of kicker candlestick patterns – bullish and bearish.

The bullish kicker candlestick pattern develops during a bearish price move. I know that is counterintuitive, but remember the stock gaps in the opposite direction of the primary trend – hence bullish.

See that the two candles of the gap are bearish and bullish respectively. The key point to call out is that the candles never overlap.  This is essential when validating the pattern.

The pattern is the mirror of the bullish candlestick pattern and is a great indicator that the party is over. 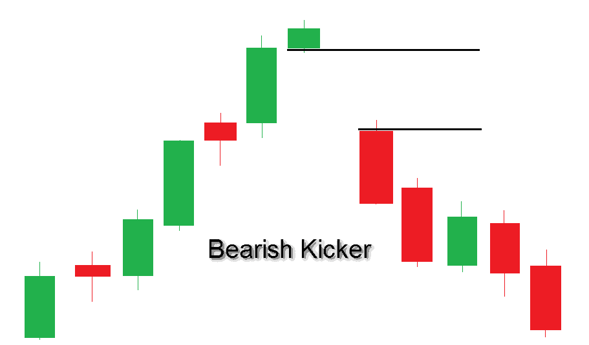 As you have probably guessed, the pattern is absolutely the same as the bullish kicker, but upside down. This time the two candles of the gap are bullish and bearish respectively.

Again, notice how there is no overlap between the two candlesticks.

When you spot a bullish kicker pattern on the chart, you should look to get long.

Conversely, if you identify a bearish kicker pattern, you should look to get short.

Let’s now do a deep-dive of a real bullish kicker charting example: 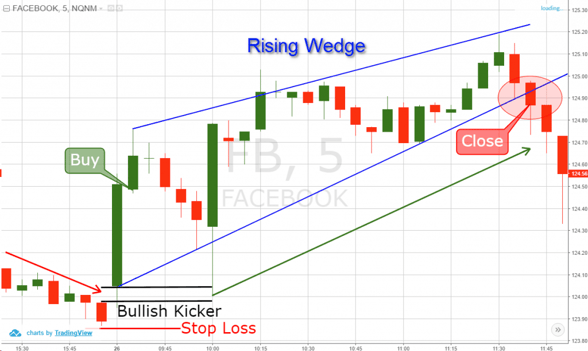 This is a 5-minute chart of Facebook, which shows the market opening on August 26, 2016.

After a decrease, FB finishes the trading day with a bearish candle.

The next trading day starts with a bullish gap and a big bullish candle. The last candle of the previous trading day and the first candle after the opening do not overlap.

This confirms the authenticity of a bullish kicker signal on the chart. For this reason, we open a long trade after the gap up candle.

One point to note is that we opened our position after a large candlestick.  There isn’t necessarily anything wrong with this approach, but with such a large price expansion, odds are the stock will go lower before heading higher.

This is essentially what happened in the above example.

You as a trader need to be able to discern when a stock is having a normal retracement.  Keeping a close eye on volume is a great way to locate healthy retracements, versus a trade you need to close immediately.

Shifting gears back to Facebook – the stock developed a wedge pattern after the huge gap up candle.

As you probably know, the rising wedge pattern has strong bearish sentiment.

We close the long trade with Facebook the moment the price action closes a candle below the support line of the rising wedge pattern. This is shown in the red circle on the chart above.

Now that we’ve covered the bullish pattern, let’s dig into the bearish version of the pattern.

Above is a 1-minute chart of Pandora Media from Aug 30, 2016. The image illustrates a bearish kicker candlestick pattern, which developed after an impulsive uptrend.

The last candle of the upward move is bullish. A bearish gap followed by a bearish candle appears afterwards. This confirms the validity of the bearish kicker on the chart. Therefore, we sell Pandora stock and we place a stop loss above the pattern top as shown in the image.

The key differential of this example from the previous bullish example is the small size of the gap candlestick.

I personally like this setup, because it allows me to keep a tight stop in the event things go against me on the trade.

Also, if things do go in your favor, you are able to reap more of the profits on the way down.

As you see the price enters a bearish trend after the kicker pattern presents itself.

We are able to draw a straight trend line through the tops of the patterns.

We hold the trade until the price action closes above the blue line.

So, how does the kicker pattern measure up to the more commonly found exhaustion gap?

Notice that during a downtrend, the stock gaps down with relatively low volume.

The gap and the following decrease represent the last efforts of the bearish believers.

Suddenly, the attitude shifts abruptly and the bulls take control.

Volumes then pick up quickly and the stock changes its direction and begins a new bullish trend.

See that the increase is steady and retraces the entire down move.

If you want to trade this case, you should play it the following way: 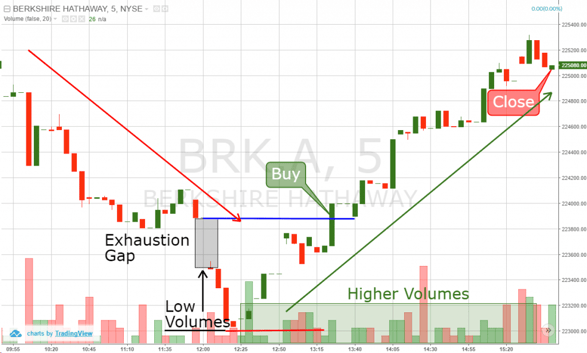 The blue horizontal line on the chart is the top of the exhaustion gap. You could buy BRK when the price action breaks this level with high volume.

You should also use a stop loss order for your trade. It should be placed below the bottom created at the moment of the reversal – red line.

Now that you have a basic understanding of both the kicker and exhaustion gap patterns, let’s have a head-to-head competition between the two patterns.

Now let’s review the positives and the negatives of the Kicker pattern.

So, what’s the verdict?

Depends on what you hope to get out of the trade.

I won’t do that to you, not yet another blog post where the author speaks out of both sides of their mouth.

The main reason for this is the high success rate of the pattern. For me, I don’t deal well with losing (at least I’m honest).