5 Strategies for Day Trading with the Arnaud Legoux Moving Average 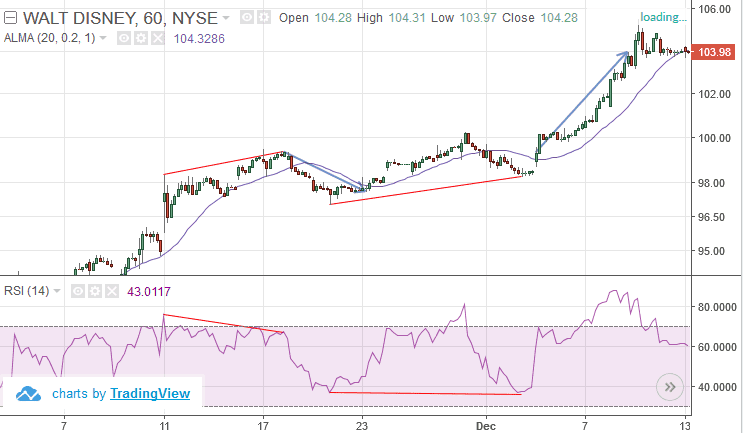 So traders are generally caught between a fast and responsive but prone to false signals moving average, or bear with the long term smoother moving average which is often delayed when it comes to signals.

Technical traders have over the years tried to overcome this method, which is one of the reasons why you find quite a few two moving average strategies, where you essentially have a short term and long term moving average, thus looking to trade based off responsiveness and smoothness. For example, a 50 and 100 day EMA applied to the charts and so on. 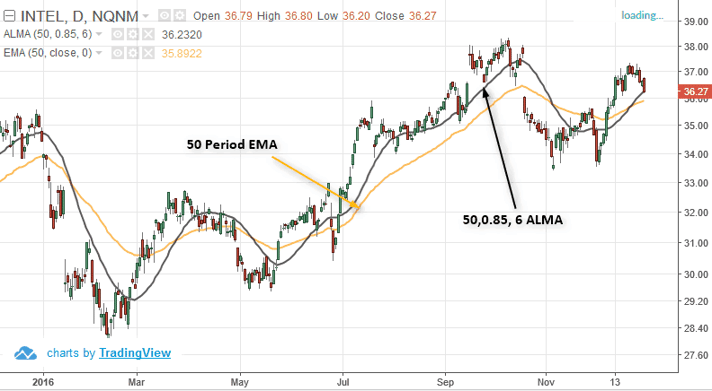 Compared to the traditional moving averages, the Arnaud Legoux moving average has some additional settings. Here is a brief breakdown of the parameters. 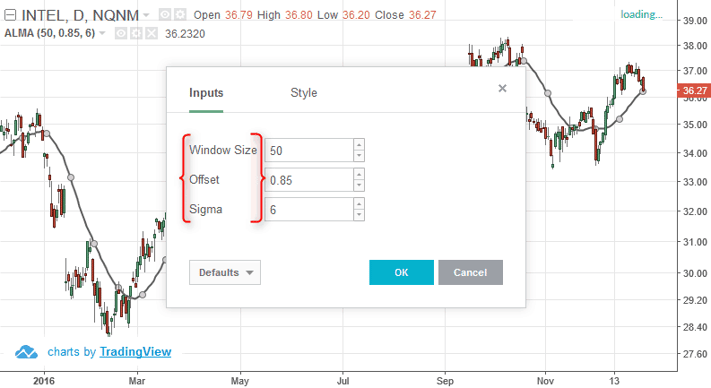 Window size: The Window Size is nothing but the look back period and this forms the basis of your ALMA settings. You can use the ALMA window size to any value that you like, although it is best to stick with the well followed parameters such as 200, 100, 50, 20, 30 and so on based on the time frame of your choosing.

Offset: The offset value is used to tweak the ALMA to be more inclined towards responsiveness or smoothness. The offset can be set in decimals between 0 and 1. A setting of 0.99 makes the ALMA extremely responsive, while a value of 0.01 makes it very smooth.

Sigma: The sigma setting is a parameter used for the filter. A setting of 6 makes the filter rather large while a smaller sigma setting makes it more focused. According to Mr. Legoux, a sigma value of 6 is said to offer good performance.

The picture below shows the parameters and how they all fit in within the Arnaud Legoux moving average formula.

Now that we have an understanding of the Arnaud Legoux moving average, there are five strategies that you can use or apply to your own existing trading strategies using the ALMA indicator.

1.  Trading with the trend using ALMA

Given the fact that the ALMA is more efficient compared to the regular moving averages and the fact that it is nothing but a trend indicator, the simplest way to use the Arnaud Legoux moving average is to apply it as a trend line indicator. Uptrend is formed when price is trading above the ALMA and a downtrend is seen when price is trading below the ALMA. Additionally, we also make use of the Stochastics oscillator with a setting of 14, 3, 3, and use this to identify oversold and overbought levels within a trend. The overbought and oversold levels are between 20 – 30 and 70 – 80. 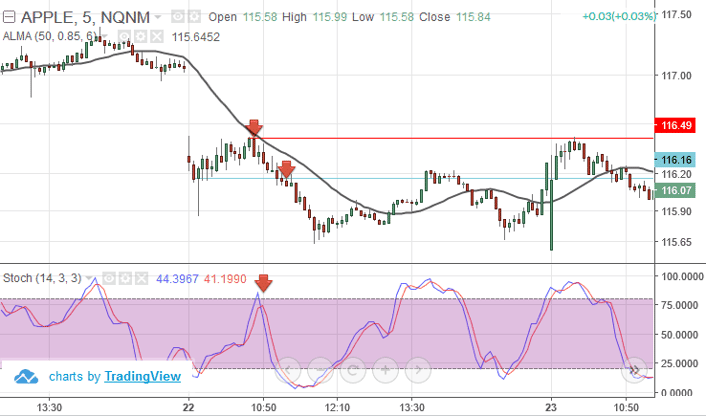 The chart above shows a nearly perfect sell signal as price is below the ALMA indicating a downtrend and the Stochastics briefly pulls up close to the overbought level and then falls. 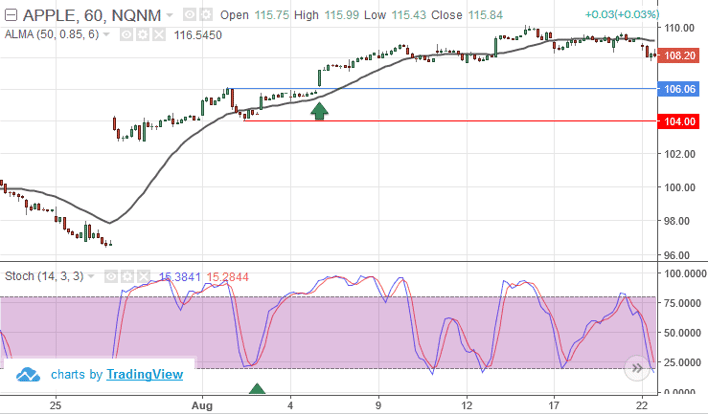 The next chart above shows a buy signal. Here you can see how price dips just a few cents below the ALMA but with the Stochastics in the oversold zone, price quickly starts to reverse and pushes high. 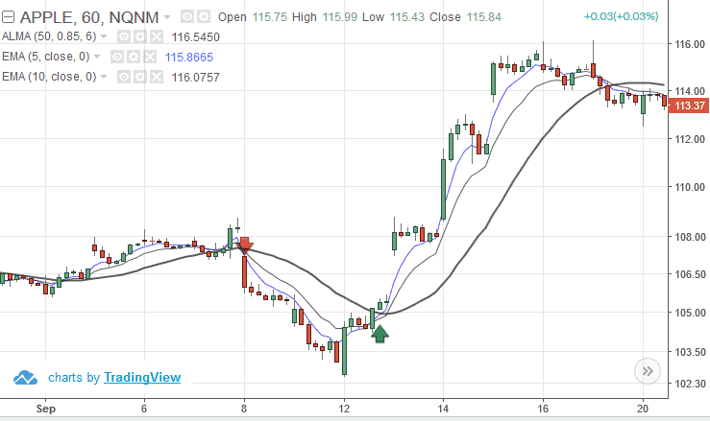 Trading with ALMA and 5,10 EMA

The above chart shows the 5/10 exponential moving average added to the chart with the 50 period ALMA acting as the trend filter. There are two signals shows in the above chart with the arrows marking the entry point after price closes above or below the ALMA. This is a very simple and an open-ended system and traders can further make use of their own methods such as using Parabolic SAR or other indicators to lock in profits at regular intervals.

What do you get when you trade with two ALMA’s? Smooth trends filter with buy and sell signals. Given the fact the Arnaud Legoux moving average combines both smoothness and responsiveness, the bullish and bearish moving average crossovers can be an effective and simple way to day trade. 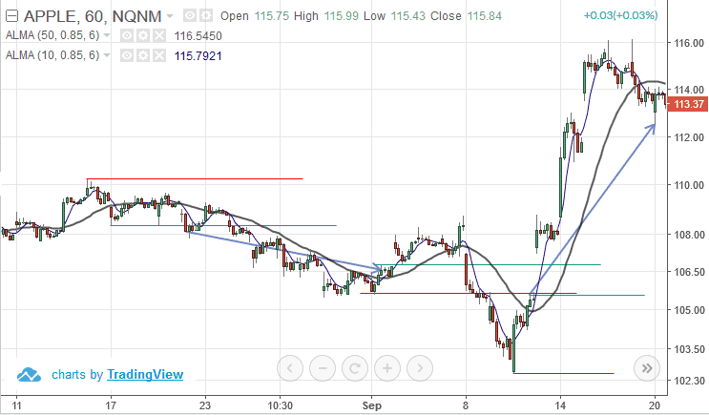 The above chart shows 50 period and 10 period Arnaud Legoux moving averages with the same sigma and offset values. Looking at the peaks and troughs that are formed during the two ALMA crossovers, we can see examples of buy and sell signals. With good money management and booking partial profits, trades can be locked in with frequent profit taking in this rather simple day trading strategy. 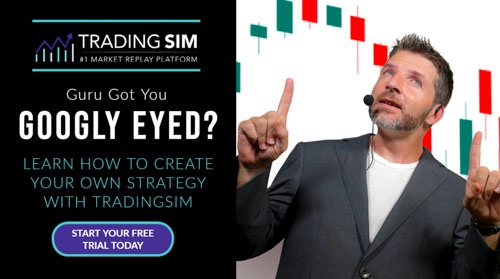 Using the Arnaud Legoux moving average as a trend filter, long and short signals are taken with a trailing stop being employed making use of the Parabolic SAR indicator. The chart below shows two examples of short and long signals generated. In the first short signal example, after price closes below the ALMA and the parabolic SAR plots above the price high, sell signal is opened with the stops trailed to the PSAR values until the trade is stopped out. 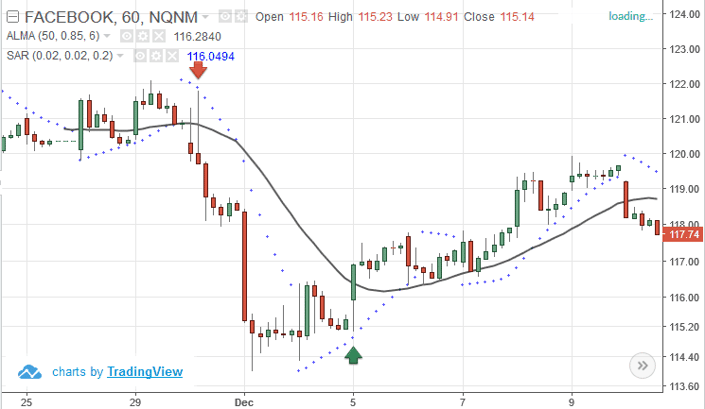 Similarly, you can see a long position where price cuts above the ALMA and the Parabolic SAR plots below the price low. Using these values as the trailing stop levels, we can stay long into the trade until the trade is stopped out.

In this day trading strategy, divergence forms the initial basis of the trade set up with the ALMA then acting as a trigger. The first short signal is identified when price makes a higher high but the Relative Strength Index plots a lower high. This bearish divergence is later confirmed when price closes below the ALMA, thus triggering a short trade.

The short trade is then exited when price closes above the ALMA. A few bars later, we can see price making a hidden bullish divergence with the higher low in price reflecting in a lower high in price. Once the divergence is formed, we then take a long position after price breaks above the 20 period ALMA indicator.

The stops are trailed either at the ALMA values or using an ATR or the parabolic SAR indicator and the trailing stops are moved until the trade is stopped out with a profit. 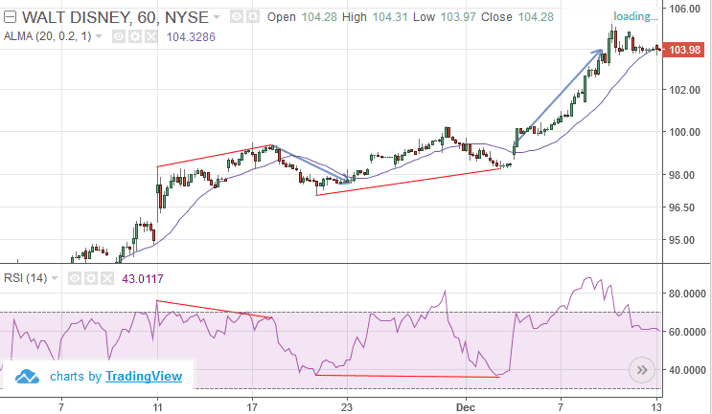 With moving averages being one of the most central of indicators when it comes to trend following, the improvement in the responsiveness and smoothness offered by the Arnaud Legoux moving average no doubt offers a better way to trade the markets.

The ALMA can be applied to just about any trend or counter-trend following trading strategy and can even replace existing trading strategies that make use of the simple or exponential moving averages. With only three parameters to change, the ALMA can be tweaked for each market to aptly capture the volatility and allow for a better way to trade the market trends.

Day Trading with Price and Volume

Price and volume are the oldest indicators you will find in the market.  As day traders we are always looking for an edge, hence the endless supply of indicators and trading methodologies.  When...

The bottom tail formation is a trend reversal pattern that comes at the end of a down move.  Below is the setup for the bottom tail pattern: There is a downtrend in progress Select two popular time...