Why I no longer obsess over the Broad Market

What are broad market indicators?

A broad market indicator is a breadth indicator that attempts to identify the underlying strength of the market.  Essentially, these indicators will uncover how many stocks are participating in a rally or decline, thus providing further insight to you the trader as to how you should weight the significance of a move up or down.

If the market is making new highs and your breadth indicator of choice is not reaching a new high, then this is a sign that the internals of the market are weak and at some point the market will experience a correction.

Other traders may provide far more elaborate explanations, but in short this is the purpose of breadth indicators.  Below are some of the broad market indicators used by trading professionals:

In this article I am going to show you why abandoning these indicators will likely have a positive effect on your trading performance.

So, why did I stop using broad market indicators?

Before you rush to judgment, hear me out.

The Broad Market is Often a Distraction

One of the major turning points in my trading career was the abandonment of “market noise”.  Market noise can be categorized in a number of ways which I have listed below:

After reading this full list of inputs, it’s not hard to see why the market can feel overly complicated.  There are so many sources and so-called experts pushing their opinions your way, making a decision can feel like giving birth.

Not that I would have any idea what that feels like (sorry honey).

As I began to look at my trading results I noticed a trend where I was exiting trades before major market moves.

Me exiting before the party occurred on four or five occasions before I could put together what was going on in my head.

I realized that I was following the advice that I had heard a million times before.  Track how your stock is performing against the broad market.  If the relative strength of your stock is less than the broad market (S&P 500, NYSE), then keep an eye on your trade because something has to be wrong.

Let’s say I was long a stock and on a particular day the broad market was up huge, 1.5% or more.  If I would look at my stock and see that it was down to slightly up for the day, panic would feel my bones.

My mind would begin racing.  Is the stock preparing to report some awful news, are the bulls that weak that they can’t keep up with the S&P?

Finally after watching my stocks go much higher in my desired direction one or two days later, the pain would set in of how I was right, but I just couldn’t hold on long enough to claim victory.

Next I will provide you with 2 simple reasons why letting go of broad market indicators and no longer caring about the ticks of the major indexes will help you with your trading.

(1)    Volatile Stocks Move to Their Own Beat

Whether I am day trading or swing trading, I only trade volatile stocks.  This does not mean I am looking for lotto tickets in the market; however, I am in search of those stocks which can bring me a decent return of 20% – 40% in weeks.

This means that I need to find stocks on the move.  I would say that 85% of my trades are placed on the NASDAQ exchange.  It’s not that I am on team NASDAQ or anything, it’s just that NASDAQ provides the most volatile stocks with the highest volume, two ingredients essential to my trading system.

I had to ask myself this very basic question.  If the stocks I am trading are of the volatile nature, will the broad market have the same effect on these stocks as it would on an IBM or Caterpillar?

As you have probably guessed, the answer to this question is no.

Volatile stocks are really a collection of active traders and investors who are constantly competing with each other on the battlefield on a daily basis.  These stocks are so heavily traded, that they can often times move independently of the broad market.

Once I came to this conclusion, I was able to remove this additional validation point of relative strength from my system.  This doesn’t mean I ignore how my stock is performing relative to the broad market over a period of weeks or months, but it does mean that if the market is up huge on Monday and my stock is not, I don’t panic.

Overbought and oversold levels are one of the most overrated indicators in my opinion, because the market is limitless.  Do you think the market cares if the slow stochastics just crossed 80?

Of course not.  The market goes and comes as it pleases.  The best you can do is manage your money accordingly, so you don’t get caught in a major squeeze.

Let’s look at some of the more recent overbought and oversold signals in the last few months to see how these fared.

Since the market has been in a strong uptrend for 2013 and the beginning part of 2014, bottom signals are often accurate while top signals are often negated.  To give you some tangible examples of how looking at the broad market can cloud your judgment, let’s peel back the onion.

Let’s say you track broad market indicators for when to open or close positions in your portfolio. 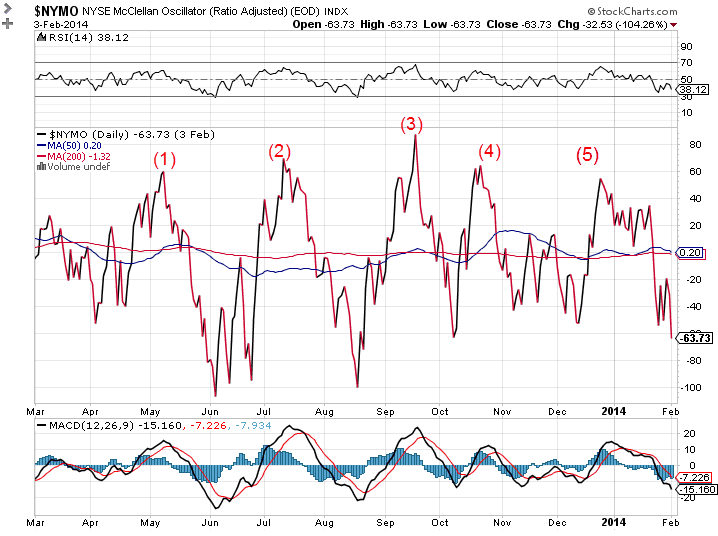 Notice in the chart below the NYSE McClellan Oscillator experienced what appeared to be four major tops in (1) early May, (2) early July, (3) latter part of September, (4) October 21st, (5) November 23rd, and (6) December 23rd.  From the looks of these peaks, it would appear that the market must have encountered some significant declines.

This couldn’t be the furthest thing from the truth.

You can see in this daily chart of the Spiders (SPY) which is the ETF that tracks the S&P 500, that out of the 5 peaks triggered by the NYSE McClellan Oscillator, only 2 proved to be accurate (points 1 and 3).  You don’t have to be a genius to see that is a 40% accuracy ratio. 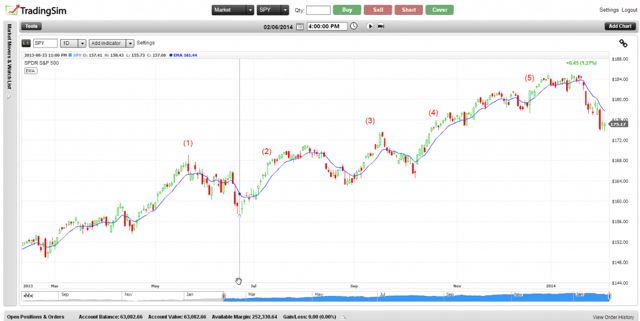 If you based your decisions to hold or sell a position based on this broad market indicator, it would have you exiting the market before the rallies.

Do you feel this is a good way to make money?  Do you see how this could hold you back from your true profit potential?

If you do not track market breadth indicators because they are too complicated, then as I stated earlier, you may simply track the relative strength of your stock to the major indexes such as the NASDAQ or S&P 500.

In the next example, I will show you how worrying about my stock’s performance relative to the broad market prevented me from bringing home a nice Christmas bonus.

On December 18th, the SPY had a strong up day.  The index had a bullish engulfing pattern with a huge price range.  As you can see in the below chart, after this sizeable up day, the SPY continued to rally for another week or so. 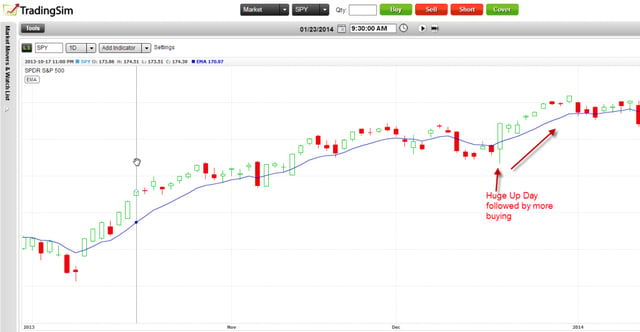 Well just my luck, I was long JASO at the time.  On the 18th of December JASO was slightly down.  I of course found this very perplexing.  I began thinking; well the longs are clearly going to sell all of their positions going into the end of the year for tax purposes.   Maybe JASO just doesn’t have it in her to make the big move.

In true self-sabotage fashion, I exited the trade the day before Christmas.  I probably tried to rationalize it to myself by saying I didn’t want to have any open positions for the holiday.

Honestly, I can’t remember how I explained closing the position to myself, but the one thing I do remember was that I was tired.   Tired of waiting on JASO, tired of feeling like I was fighting the market, because JASO clearly was not keeping up with the pace of the NASDAQ.

Well, just as you guessed it, two days after I closed my JASO position, the stock went on a 20% run from my entry point over the course of a week.

Why did I miss this rally you ask?  Simply put, I was too worried about how JASO was performing against the broad market.

As I will always state on the Tradingsim blog, winning in the market is all about finding your edge.  For me I came to realize that worrying about the broad market and how any index performed on a given day was adding zero value to my bottom line.

Of course, it felt good to know what the market was doing and to be aware of new record highs, but really that’s all it was good for.

The minute I stopped tracking the market, it allowed me to place laser focus on my stocks to really get in tune with their price action.

Truly letting go of the broad market was a big factor in me making consistent profits.

To see how we can help you improve your trading skills, please take a test drive of our trading simulator to see what we have to offer.

Investors who lost money on Black Monday in October 1987 would have never imagined the strong Bull Run that engulfed the equity markets in the following years. With the Dow Jones index now standing...

Is It Time to Invest in Marijuana Stocks?

For Medical Use Only In the year 2016, while the U.S. elections overshadowed everything else, five states in the U.S., namely Arizona, California, Maine, Massachusetts and Nevada had initiatives to...

We have all enjoyed it, and later suffered from it. Yes, the experience of placing the first order in the market has been often like the first kiss. You do not know what to expect, yet you believe...