While Web 3.0 hasn't even arrived yet, some visionaries are already dreaming about Web 5.0. Jack Dorsey, the former CEO of Twitter, announced a new platform that would be able to merge the aspects of sociability (strong in Web 2.0) built on a Blockchain structure, foundations of Web 3.0.

That merging of benefits would give birth to Web 5.0, at least in Jack Dorsey's eyes, as a place where people don’t struggle anymore to keep their information private. The platform is actually under development at one of the Bitcoin business units at Dorsey’s Square (now Dorsey’s Block). The platform would use the decentralized approach to store personal data and application data.

The need for a Web 5.0 for Dorsey is fundamental because it would overcome some issues that come along with the not-decentralized-enough Web 3.0. The former CEO of Twitter believes that Web 3.0 will still be too centralized with relatively few organizations and venture capitalists holding control.

This new web platform should be developed to provide individuals the possibility to truly own their data, knowing exactly how they are managed, who is using their information and deleting (or not showing) it to certain institutions/people. Most of your private information is being used by web participants to either market to you, or monetize your personal data.

In Web 5, the vision is that companies will come to you and you will hold your own information privately and sovereignly. Thus, you will control everything about your interaction on the web, specifically your data.

John creates his own digital wallet containing his information (Name, Surname, Nickname, Birth date, School, College... etc.). John is sure that his wallet contains all of his information securely and privately while surfing the web. Inside his wallet, John manages who has access to his information, and what to show publicly. Then, John decides to subscribe to a new social media, at this point he would need to send his info to it. With web 5.0 he doesn’t need to create a new profile but can easily connect his digital wallet to the application.

In this way, John connected the social media app to his decentralized identity, and every time he interacts with the app it is stored in his digital wallet. In such a manner, he can easily bring his personal details and public presence from one place to another easily and privately.

Thus, web 5.0 in this example would let people flow from one app to another one without rebuilding everything, every time from scratch.

As part of Dorsey's project here is how these things interact with each other:

This could be extended to using apps for your favorite collection of images, music, or videos. For example, you can assemble your own playlist with your favorite songs without the tether to the app that you currently have. Websites and apps today are built like silos, where they try to imprison the user as long as they can, fatiguing the user from moving to new places.

Web 5.0 is the next generation of the internet coined by Jack Dorsey. In short, it reverses the current order of things on the internet, where user data is used and misused freely and frequently. Instead of companies requiring your data, you would own your own data and companies would come to you for permission to use it. Here is Dorsey's definition: 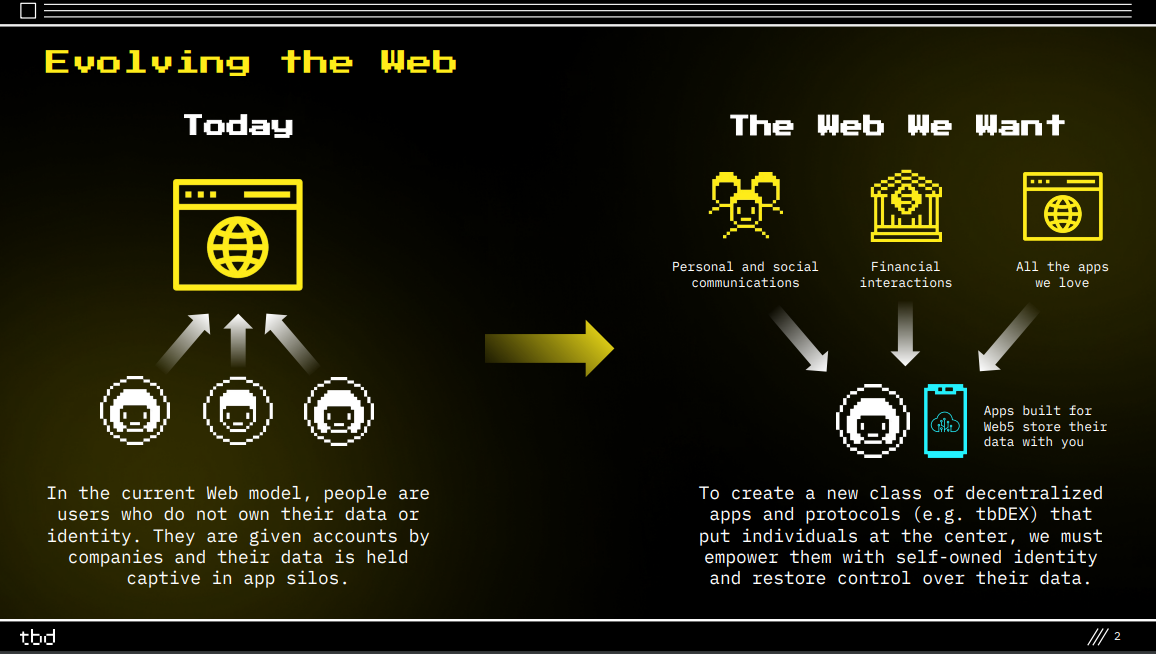 Web 5.0 has the potential to greatly improve the way we use the internet. Many people believe that web 5.0 is the next logical step in the evolution of the internet. While the specifics of web 5.0 are still being debated, there are a few general ideas that are gaining traction.

One of the most significant benefits of web 5.0 is that it will be even more user-centric and more de-centralized. This means that web 5.0 will be focused on delivering a better experience for users all while providing more individual privacy. Everything from the layout of websites to the way search engines work will be designed with the user in mind. In fact, apps will be based upon the sovereignty of the user instead of the corporation behind the app.

Here are a handful of benefits to Web 5:

While it's still too early to say for sure how web 5.0 will develop, you could support the project that Dorsey is sponsoring at https://developer.tbd.website/projects/web5/. How to do that? We're not really sure. The idea is to provide more sovereignty to the individual, so it is difficult to say how it will be monetized. In fact, Web 5 is a departure from normal funding methods like centralized coins, blockchains, etc., which have key stakeholders. For that reason, it may be difficult to invest in.

There’s not a clear definition for Web 3.0 as it is often described as a Semantic Web, which means that information on the web is organized in a way that can be easily understood and processed by computers. This is in contrast to the current state of the web, where a lot of information is unstructured and difficult for machines to make sense of.

Another common element of web 3.0 is the idea of the "connected world." This means that all devices and systems are interconnected and can seamlessly share data with each other. This is made possible by technologies like the Internet of Things (IoT) and blockchain.

Finally, web 3.0 is often described as being more user-centric than previous versions of the web. This means that users have more control over their data and privacy, and there is more transparency around how data is used and shared. While there is no single definition of web 3.0, these are some of the most commonly cited elements.

While the term was first invented in 2014 by Gavin Wood, co-founder of Ethereum Web 3.0 gained mass popularity in 2021 thanks to cryptocurrency diffusion and adoption. The idea of what is hidden behind 3.0 is here in the sense of data security, scalability, and privacy for users, but it is the early stage of the new era. We can definitely say that Web 3.0 is coming, but it is not still here.

Web 3.0 is a proposed upgrade to the internet that would make it more secure and efficient. It would also give users more control over their data. While work on web 3.0 is still in its early stages, there are already some indications that it may soon become a reality. For example, Microsoft is hiring a Web 3.0 product manager as its involvement in crypto becomes more and more fundamental. Meta and Microsoft are also collaborating on advanced API systems, which if web 3.0 does become a reality, could have a profound impact on the way we use the internet.

Web 3.0 is the third generation of the World Wide Web, and it is characterized by increased connectivity and personalization. Some of its benefits include:

In contrast, Web 5.0 is the fifth generation of the web, and it is characterized by a move to a more decentralized architecture where web based apps are centered around individuals rather than companies providing services. The heart of the Web 5 theory is that the user is sovereign and carries his/her own data in a wallet that is shared and protected by new decentralized identifiers, web nodes, and more. Apps would be limited to your personal walled garden of personal info and would request to interact with you.

Web 3 is the next generation of the internet, and it promises to be even more decentralized and user-friendly than the current web. So how can you get involved and start investing in web 3? Here are a few ways:

So those are just a few ways you can start investing in web 3.0 today. Get involved now and you'll be well-positioned to take advantage of this exciting new technology as it grows and matures.

The two biggest differences between web 2.0 and web 3.0 are the emphasis on user-generated content and the use of Semantic Web standards. Web 2.0, also known as the social web, is all about community and collaboration. Services like Facebook, Twitter, and Wikipedia are built on user-generated content: users create and share articles, photos, and videos with each other.

In contrast, web 3 is focused on structuring data so that it can be read and understood by machines. The Semantic Web is a set of standards that allows computers to process information from the web more effectively. These standards help to make data more interoperable so that it can be easily shared across different platforms. As a result, web 3 promises to be a more efficient and powerful way of accessing information on the internet.