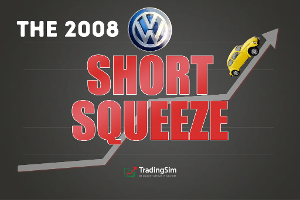 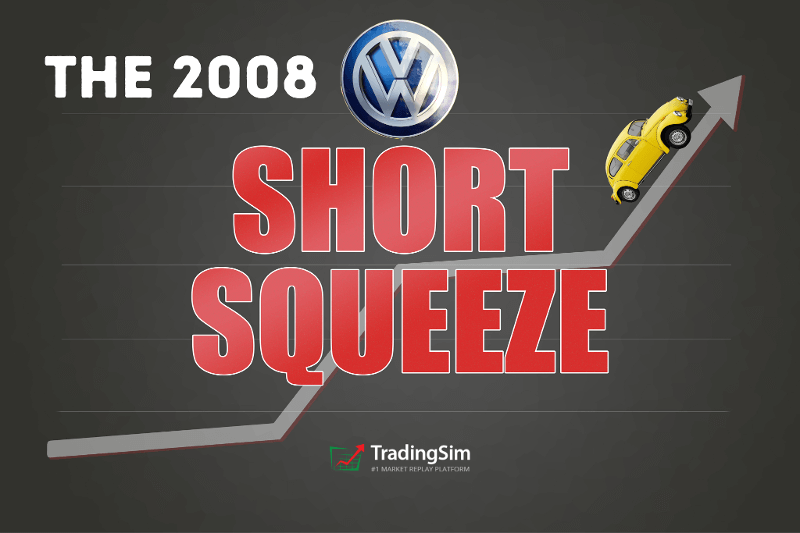 The Volkswagen short squeeze of 2008 was epic. Only a few times in history has a stock rocketed that quickly and violently to jaw-dropping prices. In this article, we'll discuss what happened, explain what a short squeeze is, and how to search for potential short squeezes in the future.

What is a short squeeze?

A short squeeze refers to an event in the stock market that abruptly increases the price of a stock or security without any significant change in its fundamentals. The short squeeze occurs when a relatively large number of traders hold short positions in a stock.

What does a short squeeze mean?

The term 'short squeeze' implies that traders with short positions are squeezed, forcing them to close their positions at undesirable prices and take on heavy losses due to a sudden and outrageous increase in stock price.

Generally speaking, it means that someone somewhere is blowing up their account. Unfortunately, losses incurred from shorting can be infinite, compared to losses from buying, which can only go to zero.

How does a short squeeze work?

What is short selling?

Heavily shorted stocks are vulnerable to short squeezes. For example, traders who predict that a stock will drop in value can short sell it to benefit from its falling prices. When you short sell a stock, you borrow it from your broker at the prevailing interest rate and sell it in order to repurchase it later at a lower price. In other words, you first borrow the stock, sell it at a higher price, and then repurchase it later when the prices plummet to return it to your broker.

But what if your prediction regarding stock price goes wrong? What if you short a stock and its price, instead of dropping, starts rising rapidly? In such a case, you either have to wait for the price to drop to book a profit, or you can buy it at the current higher market price and limit your losses.

If you go with the first option, you could theoretically suffer unlimited losses if the price doesn't go lower. You could potentially wipe out your trading account. In contrast, you can cap your losses if you buy the stock back at a defined risk level.

What causes a short squeeze?

This is the dilemma that short sellers face during a short squeeze. They have to decide whether to close their position quickly to cut their losses or wait for the price to drop, which entails an even higher risk as losses can mount if the price climbs further. However, for some heavily invested institutional short sellers, this isn't as easy as clicking a button.
When a short squeeze occurs, traders with short positions rush to close their positions and buy the stock at prevailing higher prices. This leads to a high buying pressure on the stock, which pushes the stock price even higher. With the incremental rise in stock price, more and more short sellers succumb and are forced to take their losses by margin calls.

Typically, when most of the short sellers are forced out of their positions, the stock usually plummets to its pre-squeeze levels.

What are the most famous recent short squeezes?

Many stocks have been subject to short squeezes, with the most recent being GameStop Corp. (NYSE: GME), Tesla, Inc. (NASDAQ: TSLA), and AMC Entertainment Holdings, Inc. (NYSE: AMC). However, in this article, we will take a look at the famous Volkswagen short squeeze that occurred in October 2008.

What happened in the Volkswagen short squeeze?

Amidst the global financial crisis in 2008, Volkswagen, the German vehicle manufacturer, suffered a short squeeze at the hands of its business partner, Porsche. Markets worldwide were already reeling from the aftereffects of Lehman Brothers' collapse and the US's economic meltdown.

Volkswagen's stock price started increasing gradually, beginning in 2006 when Porsche announced its plan to increase its stake in the company. The stock continued an upward trend even in 2007 even though the company had accumulated high debt levels and was facing financial difficulties.

The company's problems were exacerbated by the onset of the financial crisis in 2008 that evaporated demand for its cars. This led many hedge funds to take short positions in the stock, seeing the company's imminent collapse and its inflated value on the stock market.

When Porsche announced that it had no intention of fully acquiring Volkswagen, it also signaled that the market had more short positions on Volkswagen's stock than it had expected. The news sent shockwaves among the short sellers as they rushed to close their positions.

As per estimates, around 12% of the company's outstanding shares were sold short, and liquidating them was impossible with only 6% of its shares available for trading on the Frankfurt Stock Exchange. Panic gripped the market as short sellers were left clueless due to the supply-demand imbalance.

How high did Volkswagen go in the short squeeze? 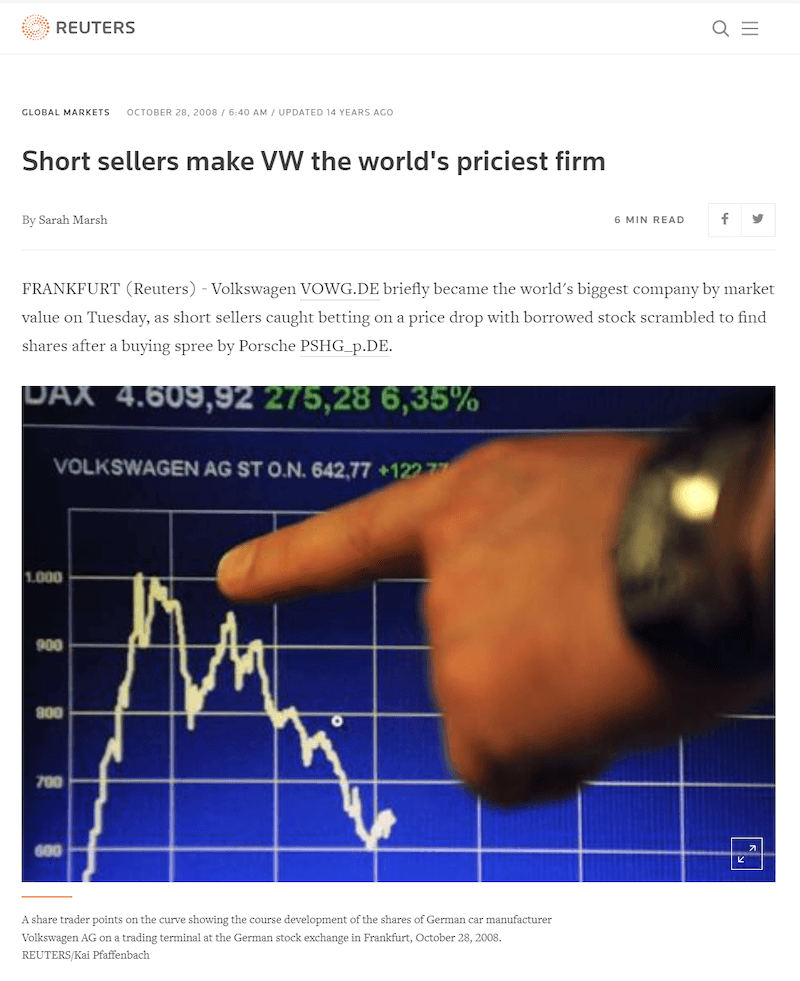 The German financial services regulator BaFin took note of the unprecedented rise in Volkswagen stock price and started examining evidence of market manipulation, insider trading or other wrongdoings. However, Porsche denied having any role in share price manipulation and blamed short sellers, stating that their speculation led to the short squeeze.

How long did the Volkswagen short squeeze last?

The short squeeze started on 26th October 2008, after Porsche announced that it had increased its stake in Volkswagen. The worst of it only lasted a few days. Soon, the news broke out that with Porsche's increased stake in Volkswagen, only 6% of the Volkswagen shares were available for trading compared with the requirement of around 12% shares for covering outstanding short positions. 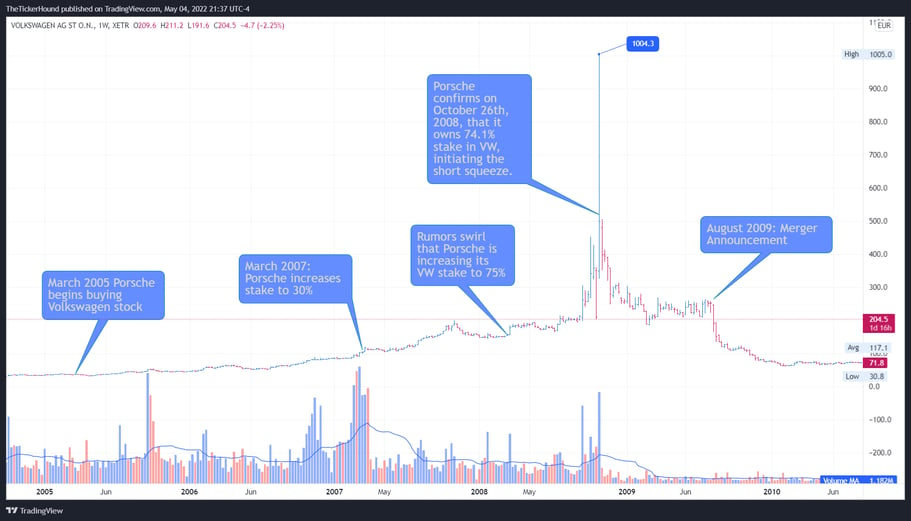 After the stock price peaked, Porsche released around 5% of its Volkswagen holdings at stratospheric prices and allowed short sellers to close their positions. After the 28th of October, the stock plummeted by more than 58% in the next four days. A month later, the stock was down 70% from its height.

Nevertheless, short sellers suffered heavy losses as they were caught between the rising prices and the limited supply of shares in the market. According to some estimates, hedge funds lost around $30 billion on their Volkswagen short positions.

How to find short squeeze stocks?

Not all stocks are suitable for executing a short squeeze strategy. We must also caution you that short squeezes are very risky due to increased volatility. However, here are some tips for finding stocks that are good candidates for a short squeeze:

For example, if a company has a total of 10,000 shares outstanding out of which short sellers have shorted 1,000 shares, the company's short interest percentage would be 10% (1,000/ 10,000) x100. In other words, the short interest percentage of 10% means that the short sellers have shorted 10% of the company's total outstanding shares.

You can use overbought indicators such as the RSI indicator or Stochastics indicator to determine if a stock is trending upward faster than its peers in the market. This alone won't tell you if a short squeeze is occurring, however. It is good to understand the underlying fundamentals of short interest, float, and outstanding shares as a better determinant for a short squeeze.

In order to really calculate the potential for a short squeeze, you need to understand stock float and outstanding shares. Like the VW example, the amount of remaining shares on the market can determine in large part how fast the stock will move on demand.

As a general rule of thumb, the lower the float and the fewer outstanding shares in a stock, the more volatile it will become in times of high demand. This is closely tied to liquidity. Larger orders will push a stock higher much faster when fewer shares can be traded.

We explain this more in-depth in our article called Float Rotation.

Short interest ratio (also known as days to cover) measures the days required for short sellers to fully close their short positions. The ratio is calculated by dividing the number of shorted shares by the average daily trading volume (ADTV). 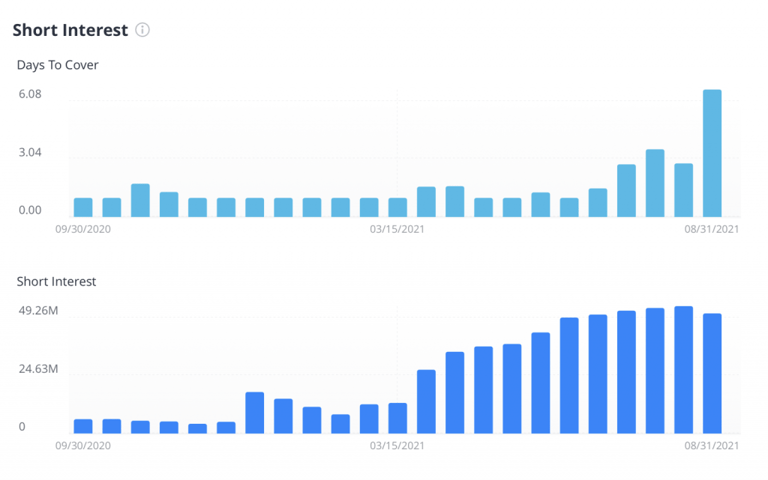 A higher short interest ratio means that short sellers would need more time to liquidate their positions quietly. Short sellers of high short-interest ratio stocks sometimes panic in the event of a short squeeze because of the large number of shorted shares and a low average trading volume of the stock. We discuss this in our post on liquidity traps.

If you think that a stock is a good candidate for a short squeeze, you need to follow it closely. Even a small positive newsflow or a catalyst can push its price up, triggering a short squeeze that can lift it to unprecedented levels in a short amount of time.

If you miss the right time for entry, you can potentially lose money as a short squeeze can quickly peak and recede as fast as it went up. So, a wrong entry could incur losses if you do not follow the potential catalysts that drive the stock. Of course, you need a sound technical strategy as well.

These days, there are also sites like Reddit and others who have attracted short squeeze groups like WallStreetBets. You may want to stay up to speed on their current targets.

What happens after a short squeeze?

A short squeeze can last for several days, depending on various factors, such as stock, short interest ratio, short interest percentage, and catalyst strength, among others. After the stock reaches its peak, the stock usually plummets abruptly as short sellers cover their open positions and demand dries up.

Stocks that experienced price hikes and short squeezes without the corresponding increase in fundamentals tend to recede to their pre-squeeze levels quickly.

A short squeeze is an important phenomenon in the stock market, and every trader must be aware of it. Retail traders have discovered their power in social media and social groups like Reddit which drove many of the recent short squeezes in GameStop, and AMC Holdings.

Nevertheless, the Volkswagen short squeeze remains one of the biggest in the history of markets and carries with it valuable lessons for traders and hedge funds.

If you want to practice finding good short squeeze candidates, we have a scan filter in TradingSim that allows you to narrow your daily results to stocks with high short interest. Be sure to give our 7-day free trial a go and practice your short squeeze strategies!

One of the most powerful trading setups is the short squeeze.  A short squeeze occurs when you have a crowded trade on the short side.  Here’s the key with these types of setups.  You want to be able...

Unless you have been living under a rock for the past year, you’ll know that GME is the ticker symbol for the wildly popular meme stock, GameStop (NYSE:GME). Why is GME GameStop stock so popular? It...