Trading Process: Why You Need a Divorce from Money 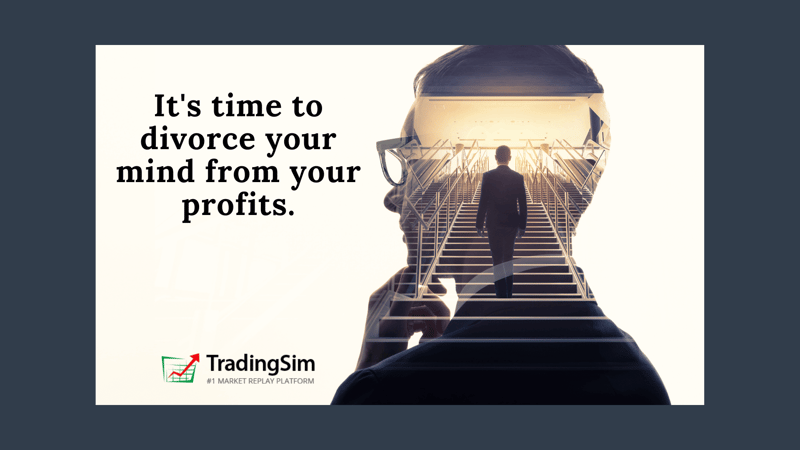 In a fantastic interview by Aaron Fifield, trading veteran John “Rambo” Moulton unleashed a deluge of golden trading wisdom focused on trading process. Perhaps one of the more impactful moments was his admission that his best trading days came after he had completely divorced himself from his trading profits.

New traders and old traders alike battle with the constant trigger of their statements, their profit and loss. It’s like an ever-present cancer reducing the process mindset we strive for to a pile of rubbish-quick-profits, over-trading, and fearful stop outs.

If you’re interested in viewing the interview, it is very much worth your time. Be sure to follow Chat with Traders podcast as Aaron is constantly putting out great interviews and content.

In this post, we’ll dive into a few of the concepts John discusses and expand on the trading process with some practical ideas.

How many times have you found yourself mid-trade thinking about the profits you’ve already given back on the day, on the week?

The trade plan is clean. The price action is normal. Nothing is out of line, but the second guessing creeps in like an unwanted guest. The invisible virus of doubt and fear trigger your better judgement as the trade rallies.

Your perception of danger and threat stop you out of the trade long before your stop was actually hit. Why? You don’t want to lose any more on the week. Your subconscious mind is telling you you’re being responsible, right?

And the moment you pull the trade, it carries right on, hitting your initial target without you.

Divorce Your Money — Marry The “Now”

At the heart of this problem is an inability to focus on the present, on the process. That may be obvious. And rest assured, this isn’t an easy task to accomplish.

So, where do we start to mitigate this trading issue?

As Dr. Brett Steenbarger writes in Lesson 7 of his The Daily Trading Coach, “if you wish to change the doing, you must change the viewing.”

In his lesson he shares his own experience with minimizing trades as a reaction to thinking about his profit/loss and prior performance.

“Instead of responding to the market,” he says, “I’m now reacting to my own concerns regarding profitability.”

And this is the heart of the matter — reacting to concerns of performance.

It was this issue that spurred John Moulton to make a change in his own trading. As he recalled his earlier days of trading in the interview, he recounts a pivotal moment when things shifted for him.

First, for a few years he would write down every trade he made and keep count of his P/L. He had plenty of time to do so on the 45 minute train ride that took him home from Chicago every evening. To him, this was part of the trading process.

But then something happened.

While tracking his progress early on felt important to him, it became less important over time. Eventually, he decided it wasn’t that important at all. In fact, he came to the realization it was holding him back. It wasn’t really the trading process he was concerned about, it was outcomes he was worried about. This led him to this thought:

In the interview, he goes on to say, “I’ve gone months and months without looking at my statements to see if I’ve made or lost any money.”

How profound is that? Can you imagine going months without looking at your broker statements, let alone your P/L on a daily basis. What a novel idea!

Granted, John started trading in the 70s when computers and retail trading platforms were less accessible. The Internet wasn’t really around. He probably didn’t have a nice window at the top of a screen showing his running P/L throughout the day.

While the temptation may have been less present for him, the significance is still applicable to trading process today.

How Can We Divorce Ourselves from the Money

In short, it’s a four-step process. The emphasis being on “the process.”

Recognition of the Need to Divorce

Returning to our Lesson 7 with Steenbarger, recognizing the problem is step 1. You were thinking clearly when you put together the plan for the trade. But the trigger of your past losses brought danger and anxiety into your trading.

Create the habit of pausing during your trading and engaging with the thought patterns troubling you. When you do this, you “introduce an element of psychological distance,” as Steenbarger notes.

This distance gives you time to readjust and refocus. And this is the goal, focusing on the market, not on yourself (performance).

Pause and Affirm the Process

Just like in a bad relationship, you need a break sometimes. It can be too much with the constant frustration and emotional swings.

Distance from the problem through breaks, meditation, walking, music, or other therapeutic means, can bring the needed space to think objectively about what is influencing you.

Emotions run high in the heat of trading. Take the time-out you need and decide if your P/L is affecting your decision process.

Then, with a clear head, reaffirm the reasons you are in the trade. Perhaps you need to make small adjustments with size or positioning. But, likely, you’ll find the original reasons for the trade are still very well in tact.

Shoot, you might even find a good reason to add to your position.

Have a “Next” Mentality

Trades are not permanent. This gives you the opportunity to look forward to the next play. The last play doesn’t define you, nor does it limit you.

John Moulton is a master at moving onto the next trade. It is likely what defines his ability to trade so well.

Each of his trades is an opportunity in and of itself. He’s focused on the now. As he says in the interview, “When you lose, you have to experience the loss, feel it, learn from it, and spit it out and let it go.” Here’s why:

This mindset comes from ignoring the outcomes. To understand this, let’s take one from the playbook of legendary college football coach Nick Saban.

Nick Saban, Head Football Coach at the University of Alabama, is a living legend — like him or not. No one has ever accomplished what he has as a football coach.

What is it that makes Saban so successful with his teams? It’s often referred to as The Process. In a nutshell, this is the relentless pursuit of making the most of every moment, and then moving on to the next moment, and repeating.

Outcomes and intangibles don’t matter to Coach Saban, and he pounds this into his coaching staff and players until they believe it, and believe in themselves.

So it is with trading. As “Rambo” Moulton preaches, you must disconnect yourself from the outcomes if you are going to succeed. It is no different than performance sports. Focus on the score and you’ll fail. Focus on each step of the way and what you have to do to overcome adversity.

Execute your entry criteria. Fight for the best price. Move to trade management and follow your rules. Add to a winner with proper skill. Exit the trade according to your rules. Review, Rinse, Repeat.

Do this enough, and the outcomes will take care of themselves.

Ignore the Money, Increase Your Self-Belief

Believe it or not, your self-worth in trading is often tied to the money you make — your performance. And this shouldn’t be so.

Be honest, how many times have you seen traders flashing their P/L from big days on Twitter and felt the sorrow that it wasn’t you? Makes you feel unworthy doesn’t it? Lesser?

Success theatre is just that, theatre. This is all “rat poison,” as Nick Saban would say, referring to how ESPN commentators opine about his team and players and their wins and losses.

Focusing on your outcomes or anyone else’s is rat poison for your trading. All you should be concerned about is the next trade and your execution of that trade.

As your trading evolves, you’ll find that your belief in yourself grows. Just as young football players who “buy in” to Saban’s process begin to believe they can beat anyone, so will you.

But that belief doesn’t come from focusing on your outcomes. It comes from knowing you succeed at every entry, every add, every stop out, every exit, and every trade you take. It comes from the discipline in the small things each and every day.

What are you doing to get better this week?

I saw a great trade example that I had to share with you guys; we are going to walk through how to day trade a bull trap.  As many of you know, Valeant Pharmaceuticals (VRX) has had a downward death...

Day Trading Breakouts at the End of the Day

When you think of day trading breakouts the first time frame that comes to mind is likely the morning.  This is a natural first reaction as the morning presents the greatest odds of volatility with...