What Is A Stock Market Flash Crash? 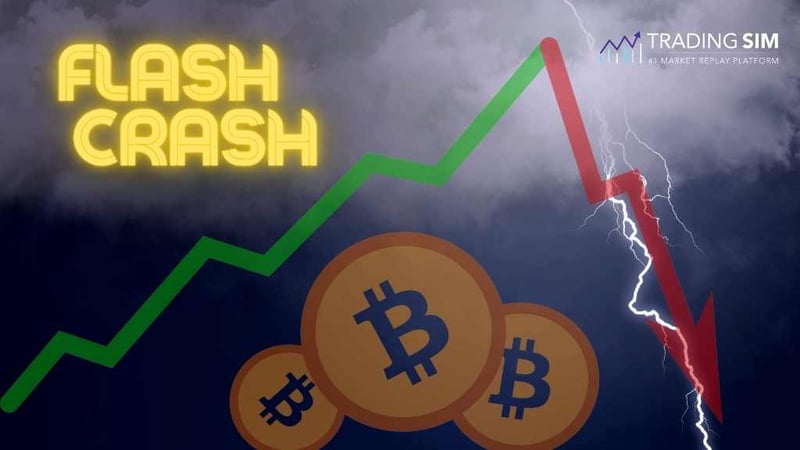 A flash crash is a rapid and sudden downfall in the prices of electronically-traded securities in a stock market due to an overwhelming number of sell orders in comparison to buy orders. The situation resembles that of a quick sell-off, which drastically plummets stock prices. However, the market usually recovers by the end of the trading day, giving the impression as if the decline never occurred.

What causes a flash crash?

Flash crashes usually occur due to temporary anomalies in the market. With the advent of high-frequency automated trading, stocks can rise and fall quickly due to heavy buying or selling by trading bots. Because trading bots are programmed to react in a certain way when a benchmark is breached, a sudden fall in prices can exacerbate the situation and result in a sell-off. For this reason, most market experts have blamed flash crashes on algorithmic trading. In the event of an unexpected fall in prices, trading bots place large blocks of sell orders, which creates a domino effect that grows to become a flash crash.

However, flash crashes could occur because of many other reasons as well. Apart from high-frequency, algorithmic trading, some other common causes of the flash crash include technical glitches and market manipulation such as spoofing tactics by traders.

What does a flash crash indicate?

Although flash crashes are transient, they can shake investors’ confidence in the market and economy. If the flash crash persists for more extended periods and turns into a market crash, it could signal a recession. It is an unpleasant situation for investors as they lose their wealth in minutes. Fearing the downturn will last longer, many investors exit the market and book their losses. Investors need to know whether the downturn is caused by any market-related trigger or is a result of a technical glitch or temporary orders imbalance from high-frequency trading.

The stock market has experienced many flash crash events over the years. For example, on August 22, 2013, trading on the Nasdaq was stopped for around three hours because of a technical glitch in the NYSE system due to an inability to process the price feed from the Nasdaq. On May 18, 2012, another technical glitch at Nasdaq during Facebook’s initial public offering (IPO) stopped trading activity in the stock for around 30 minutes. Investors suffered losses to the tune of around $500 million.

On October 15, 2014, the U.S Treasury 10-year note yield declined by 16 basis points or 0.16% in a few minutes. However, the drop was short-lived and recovered quickly. The anomaly was thought to be the result of algorithmic trading, which makes for the bulk of the trading in the U.S treasuries.

The flash crash of 2010 happened on May 6, 2010, at around 2:30 p.m EDT. The Dow Jones Industrial Average (DJIA) dropped 1,000 points in under 10 minutes, the largest single-day drop in its history until then. The index declined by around 9% in an hour, with investors suffering losses of around $1 trillion. However, the index recovered approximately 70% of its value by the trading day's close.

After investigations into the incident, it was revealed that Navinder Singh Sarao, a futures trader in London, was the culprit who tried to manipulate the market by rapidly placing and cancelling hundreds of E-Mini S&P futures contracts on the CME exchange. He used the illegal practice of spoofing to profit from the rise and fall of the contracts or securities.

On that day, Waddell & Reed, an asset management company, put up a large single sell order and sold $4.1 billion of futures contracts, pushing the prices on the CME downwards. The plummet quickly cascaded down the DJIA, resulting in the infamous flash crash.

The flash crash of 1962 is also called the Kennedy slide of 1962. The flash crash started in the latter half of December 1961 and lasted until June 1962. Previously, the DJIA had registered gains of 27% in 1961, which encouraged investors to invest fearlessly in the market. During the crash period, the index fell by 5.7% or 34.92 points, which scared the public from investing in stocks and mutual funds in subsequent years. The SEC investigated the crash but found no “malfeasance” to take corrective measures.

What is a flash crash in crypto?

Similar to the stock market flash crash, a crypto flash crash also involves a quick and short-term drastic drop in the price of all or individual cryptocurrencies. In 2021 alone, bitcoin experienced around six flash crashes.

In 2021, Ethereum-based tokens trading on the Kraken exchange also suffered a flash crash when their prices fell abruptly by as much as 50%. However, the market recovered subsequently within an hour. There were conflicting views among market analysts; some viewed it as a technical glitch while others saw it as a result of a large sell order.

What caused the flash crash in LUNA?

In May 2022, the TerraUSD and its sister cryptocurrency crashed, with the value of Luna reducing to a few cents. TerraUSD (UST), which was supposed to be a stablecoin, also lost its peg to the USD as a result of the crash.

To maintain the value of TerraUSD equivalent to a US dollar, Lunas are constantly burned and minted. When the value of UST was about to fall below $1, the UST holders could sell or burn their holdings for $1 of Luna to make a small profit. But when the value of UST jumped above $1, a large number of UST was offloaded and more Luna was minted, which increased Luna supply. The oversupply of Luna sent its price crashing.

Stock exchanges have imposed various measures to stop flash crashes in the future. Marketwide and stock-specific circuit breakers have been set up, which halt trading when the stock or index moves up or down by a certain percentage within a fixed timeframe. However, despite these measures by the exchanges, investors need to be cautious and employ risk management techniques in their trades to avoid getting stuck in a flash crash.

Market Corrections – 9 Things You Need to Know as a Trader

Which way is the Market Headed? You may be investing in the best and brightest stocks in the market and still wondering why you are down on your position. Understanding the stock markets direction is...

What is a Bear Market? How exactly is a bear market defined? The most commonly used definition for a bear market is when major indices, like the S&P 500 or the NASDAQ, fall by 20% or more, over a...