5 Key Differences between the Stochastic RSI and Stochastic

What is the Stochastics Oscillator?

While there are many oscillators, the Stochastics and Stochastic RSI are two of the most popular technical indicators.

So, why do we need two indicators with practically the same name?

Let’s go deep into the key differences between the indicators and how you can make money trading with these tools.

The Stochastics oscillator or Stochs for short is a typical range-bound oscillator measuring price momentum. As with other oscillators, the Stochastics displays the location of the closing price relative to the high and low range over a specific period of time.

The Stochastics oscillator’s main purpose is to look for overbought and oversold levels which signify rising and falling momentum. You can use both indicators to identify trending and range bound markets.

More importantly, Lane believed that changes in momentum often preceded changes in price, in a way making the Stochastics oscillator a type of a leading indicator for price changes by measuring momentum. Lane attributed this theory by comparing the way a rocket lifts off. A famous quote from Lane is that before a Rocket can change direction and turn down; the rocker’s momentum needs to slow. Similarly, when price changes, momentum needs to slow.

Stochastics can work in both range and trending markets. It just comes down to how you interpret readings between 0 and 100.

The Stochastics oscillator is comprised of the first line known as %K which displays the current closing prices in relation to the defined high and low period. The second line known as %D is a simple moving average of the %K. The most common setting for the Stochastics oscillator is 14, 3, 3 or simply 14, 3. This simply indicates a 14-period look-back and a 3 period SMA for %K, which is %D.

The chart below shows the typical Stochastics configuration on a price chart.

Example Stochastics indicator with 14, 3, 3, Set up

Besides the 14, 3 or the 14, 3, 3 setting of the Stochastics oscillator, there are other versions such as the full Stochastics and the slow Stochastics.

The most common way to trade with Stochastics is to combine the indicator with chart patterns and trend lines.

Let me break this down further.

For example, if price closed in the upper half of the range for the past 14 period’s high and low, this is reflected by the %K line rising. This also signals increased momentum and thus more buying pressure in the market.

Similarly, when price closes in the lower half of the range of the past 14 periods, then the %K line falls or slopes down, indicating weakening momentum or increase selling pressure.

The %D is the simple moving average of the %K and similar to the general rules of moving averages, when the %K cuts across the %D line, buy and sell signals are generated or the momentum is seen to increase and decrease even further.

When you combine Stochastic readings with the trend you can also identify buying and selling opportunities.

The chart below depicts how the Stochastics %K line (and thus %D) rise and fall in relation to closing prices.

What is the Stochastic RSI oscillator? 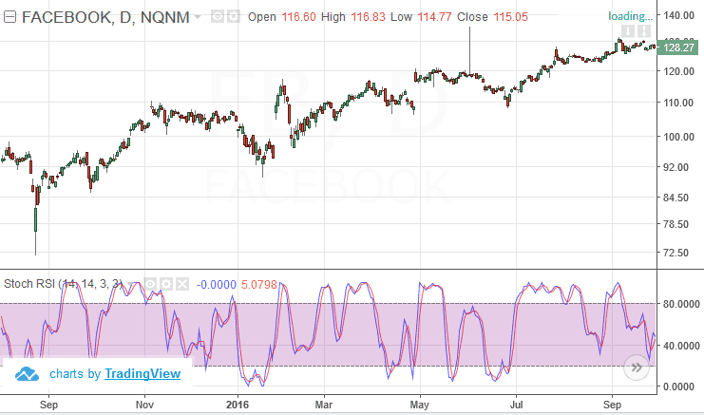 The Stochastics RSI indicator provides a stochastic calculation of the RSI (Relative Strength Index) which is another momentum based indicator. The main difference here being that, the Stochastics RSI measures the RSI, relative to its RSI’s high and low range over the specified period of time.

You can see by now the following relationship.

Why Create Another Version of the Stochastic Indicator?

The basic premise behind developing the Stochastic RSI is because the RSI is able to oscillate between overbought and oversold values of 80 and 20 for extended periods of time without reaching the extreme levels of 100 and 0.

In order to address this issue, Chande and Kroll designed the Stochastics RSI to increase sensitivity to the RSI and generate more overbought and oversold signals. However, due to the fact that the Stochastic RSI is an indicator of an indicator, there can be a significant lag between the signals generated by the indicator and the price chart.

Furthermore, the Stochastics RSI can get choppy when markets are range bound and which can lead to false signals.

The Stochastics RSI values are generally a 14 period look back of the RSI and 3 period SMA. It is commonly referred to as the 14, 14, 3, 3 setting.

When trading with the Stocahstics RSI, there are some key factors to bear in mind.

The Stochastics RSI measures the value of the RSI, relative to the range from the user-defined look back period.

Secondly, you enter the number of periods for the Stochastics RSI directly in the settings.

Finally, there are some key values from the Stochastics RSI oscillator.

Interpretation of the Stochastics RSI Oscillator

Overbought and oversold levels: A Stochastic RSI reading above 0.80 is overbought, while an indicator reading below 0.20 is oversold.

An important point to remember about the Stochastic RSI is that the original indicator did not have the SMA of the %K. However more and more technical charting platforms have started offering the SMA setting of the %K as well making it look similar to the regular Stochastics oscillator.

Most charting platforms set the range of the Stochastics RSI to 0 – 100 instead of the original 0 and 1. 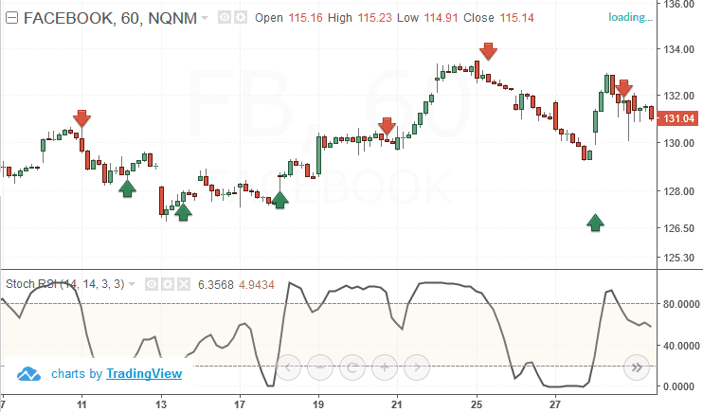 The above chart shows the Stochastics RSI indicator without the %D or the SMA of the %K. The platform is showing the 80 and 20 values versus the 0.8 and 0.2. Regardless, whenever the Stochastics RSI rises above 0.20 in range bound markets – price rallies.

Conversely, the price can fall when the Stochastics RSI falls below the 80 level.

Five key differences between the Stochastic RSI and Stochastic

Now that we know how the Stochastic RSI and the stochastic oscillator works, here are the five key differences between the two oscillators.

#1 – #3 Different Base of Measurement

The Stochastics oscillator measures price momentum and is based on the closing price as defined by the back period.

The Stochastic RSI, on the other hand, measures the momentum of the RSI and is based on the closing price of RSI, relative to the user-defined high and low range from the RSI’s look back period. 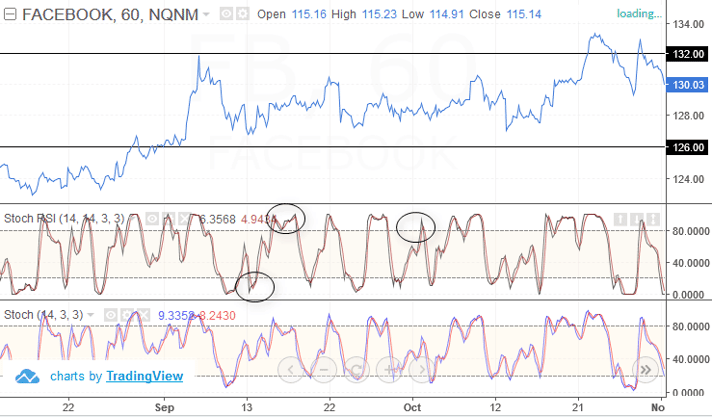 Where can Stochastics Fail You?


Like most of my articles, the post would not be complete if I did not share with you how the indicator can absolutely betray you in the real world.

Next, we will cover the two ways the Stochastics will commit an act of treason likely on a daily basis.

#1 – Stochastic RSI Crosses Above and Below 50

I totally get your desire to want to place more trades. However, with each new trade comes the risk of losing on each one. Well, the 50 level is a focus for traders without a doubt. However, are traders willing to jump in at the 50 level or the extremes of 80 and 20?

I think it goes without saying you will likely have fewer participants at the 50.

So, here is where things can get tricky.

If you just trade blindly on the crosses of 5o first you will always be in the market.

Why is that a problem? First, the market does not always provide trading opportunities every second of the day.

Next, commissions will eat you alive. The last thing you want to do is make your broker rich on the back of your hard work. According to author Brian Richards from the Motley Fool, “The more actively you trade, the more money they make.” [3]

The third reason you do not want to trade these crosses of the 50 blindly is the number of false signals. Let me further illustrate this point by looking at some price action.

I’m not going to waste my time or yours analyzing each trade signal from the crosses above and below 50 in the chart. Just think about you placing and closing each one of these trades.

The thing people do not talk about enough is the psychological strain you will go through placing these trades. I do not care who you are, at some point, you will start to pass on trading opportunities. As you know, once you do start selecting setups instead of taking each trade, the game is over.

Point is, this is not a strategy that will turn a profit in the long run.

In the above chart, notice how the stock continues to climb higher after each reading over 80. This is just a prime example of how you cannot blindly short just because the indicator is over 80.

You have to combine other indicators and or chart patterns to validate the sell signal.

The last thing you ever want to do is continue to average down as a position goes against you. I once continued to buy into each reading below 20.

Little did I know, the stock would trend lower all day as I averaged down 5 times into the close. Needless to say it was a $4,250 dollar lesson that I will never forget.

It’s really going to come down to what best fits your trading style. If you are the kind of trader that likes more signals, the Stochastic RSI will meet this need.

The truth of the matter is you just need to pick one and master it. Another option could be to look at both indicators and pinpoint when there is a divergence between the two. This could also help you identify trading opportunities.

Remember to not place too much faith in oversold/overbought readings when the market is trending. Again, oscillators will trigger more false signals if a stock is trending.

To be honest, that is a true statement. You are not going to have a 20% intraday move trading Microsoft. However, these large stocks with large floats have predictable moves. This level of predictability bodes will for indicators like the Stochastics which require a clean high low price range.

Here is a great video on YouTube from Investor Trading Academy that covers oscillators in general. This is a short video which can whet your appetite a little more in these types of indicators.

Also, please be sure to check out more posts on oscillators from Tradingsim. See which oscillator works best for your trading style.