The Run of Gold during the Great Recession

The study of the behavior of gold during periods of recessions has been one of the most favorite studies, especially for gold bugs. As the economy slows, the recessionary pressures usually lead to expansionary monetary policies from the central banks, leading to higher gold prices during such periods, or so goes the theory.

Gold, which has been considered as a safe haven since the decoupling with currencies is still considered by many to be the currency in its purest form. There are arguments both for and against the current monetary policies being followed by central banks. Critics are often quick to point out that the current era of fiat money is well overdue its expiration time.

Be that as it may, gold which doesn’t yield anything often outperforms during periods of economic, monetary and political uncertainty. This is even more evident during recessions. However, although this theory seems to be straightforward on paper, there have been many research papers published which interestingly tie the growth rate of GDP to gold prices. The reasoning behind this being that when the consumer incomes rises, it puts more money in the hands of consumers, which ultimately creates demand for gold and thus moves gold higher. This is in stark opposite to widely accepted convention that gold performs better as a safe haven during periods of economic contractions.

According to a report by the World Gold Council, the paper found that during rising GDP, demand for gold actually falls, but shows a small increase largely from demand for jewelry consumption. On the other hand, when the pace of GDP growth starts to fall or contracts, the demand for jewelry consumption also falls but gold as an investment is seen to rise significantly. The research paper shows that gold actually plays a dual role, meaning that gold’s demand can rise during both recessionary and expansionary cycles in the economy.

Recession is a period of economic decline during which trade and industrial, manufacturing output is greatly reduced which eventually reflects in a decline in a nation’s gross domestic product. A technical recession is said to occur when the GDP declines for two or more consecutive quarters. Recession is nothing but a contraction in the business cycle.

There have been many research articles on business cycles, but one name that stands out above the rest if Nikolai Kondratiev who published his famous Kondratiev Wave (also known as the K-wave) or the Kondratiev business cycle. Without going too much into the detail, the K-Wave is a 60-year cycle with internal phases classified into four distinctive phases. Kondratiev called them Spring, Summer, Autumn, Winter, but they all simply refer to the same four phases of the business cycle.

Recessions in the U.S

While there are many different ways on how recession can be defined, the National Bureau of Economic Research (NBER) is widely considered to be an authority and an official arbiter of recessions. The NBER defines recessions in a broader sense noting that recession is a significant decline in economic activity spread across the economy and landing more than a few months.

The timeline of the recessions above is shown below on the gold futures chart with a certain level of approximation.

The above chart, on closer observation validates the views from the World Gold Council. During times of recession, the behavior of gold futures is not exactly the same. For example, the 1980 – 1982 recession showed that gold prices actually declined by over 26%, whereas the minor recession later in 1990 – 1991 saw only a 9.8% decline in gold futures. On the other hand, the brief recession in 2001 saw gold prices rise over 8%, followed by a 12% increase during the 2008 – 2009 recession periods.

The reason why gold futures behave differently during the different recession periods can be attributed to a number of factors. The gold markets are primarily dominated by three sections on the demand side, this includes consumers (jewelry and technology), investors (bars, coins, gold backed financial products) and central banks. The behavior among these three main demand side factors tends to change depending on the intensity of the recessions and the factors that lead to it.

As a nation continues to experience numerous cycles of boom and bust, the economy also continues to evolve and adapt to the changes, which often leads to varying degrees of behavior in gold futures prices.

The last identified recession in the U.S. was in 2009, which has given voice to many skeptics who argue that another recessionary cycle is just around the corner. However, as Kondratiev said himself, there is no fixed business cycle and therefore there are times when a boom or a bust cycle can occur earlier than usual or at time a recession can arrive a few years later.

For a gold futures trader, it is essential to pay attention to the economic indicators that can potentially signal a slowdown in the economy. Beyond this, there is no way to identify for how long the economic slowdown will last for it to qualify into a recession.

Comparisons of the Great Recession and the Great Depression

There have been many studies conducted comparing the great recession of 2008 – 2009 and the great depression of the 1930’s. Studies have shown that while comparing the great recession to the recessions in the past, there were many differences, such as the 10-year P/E of stock was not as low and that inflation adjusted housing prices were also significantly higher. It is therefore not surprising to see now why gold prices tend to behave differently during each of the recessions. 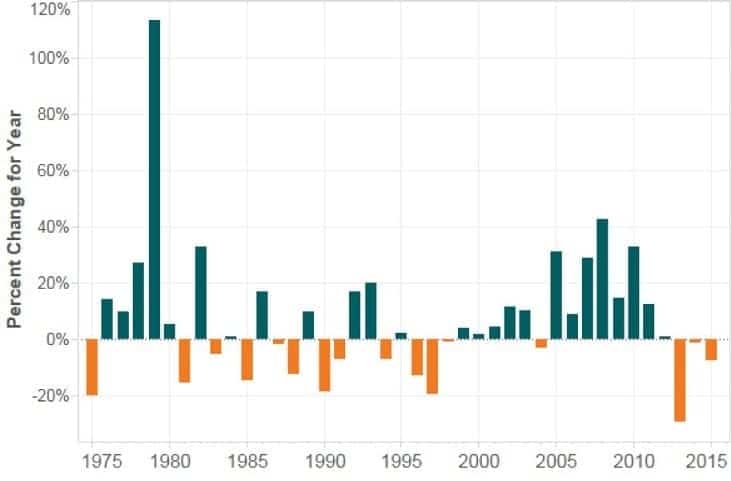 During the late 2000 recession, gold prices staged an impressive rally, eventually peaking out near the highs of $1800. The gains in the gold prices came about as the U.S. Federal Reserve unleashed strong quantitative easing policies during the recession. This significantly weakened the U.S. dollar which also added to the appreciation in gold prices.

Gold futures and U.S. Dollar Index during the 2008 financial crisis

Why does gold appreciate during recessions?

Gold is viewed by many as a safe investment option that has an intrinsic value, unlike fiat money. Gold has all the features of a currency such as a universal medium of exchange, widely recognized and easy to exchange. During times of economic crisis such as stock market crash, high inflation, recession or even depreciating exchange rates, investors flock to the safe haven of gold which although yields nothing can at the very least, preserve one’s value of assets, which could have depreciated if held on to other assets.

As far as the U.S. is concerned, with gold priced in U.S. dollars, gold moves conversely to the dollar. A stronger U.S. dollar leads to a drop in gold prices and vice versa. In periods of recessions, the value of the exchange rate drops which in turn pushes gold prices higher. Even during the 1970’s recession, despite the U.S moving away from the gold standard, gold prices appreciated strongly affirming the level of confidence investors had in the precious metal. This makes one to believe that when the equity and other risk exposed assets tend to depreciate, the inverse correlation to gold sends the prices of the precious metal higher. Research from the World Gold Council shows that in fact the correlation between gold and the stock markets are much stronger during periods of recession.

To conclude, gold futures are one of the few futures instruments available for traders that allow one to hedge the equity market exposures in their portfolio. Besides gold futures, investors also prefer to hedge risks in other gold backed assets such as ETF’s or even purchasing physical bullion.

A major differentiating factor between gold futures and other derivatives is that when you trade gold futures, you are merely a speculator and in all likelihood your gold futures contracts will be closed out or rolled over to a new contract month upon expiration. Trading gold futures does not give you ownership of gold.

There is an old saying about the stock market: ” A bull market will climb a wall of worry, while a bear market will slide a slippery slope of hope.” Loosely translated, that means that a bull market...

What is the Correlation of Gold Futures to Gold ETFs?

Gold, as an investment vehicle serves its purpose, not just as a hedge against inflation for investors but it has also become an integral part of a diversified portfolio among investors. Gold, also...

How to Rebalance a Portfolio in a Recession

Rebalancing a Portfolio During this bear market, investors may have to rebalance their portfolio to maximize their profits. This TradingSim article will help readers to show them how to rebalance...