Steel, is often said to be one of the metals or commodity that is essential to a country’s economic growth. Considered to be the lifeblood of a healthy and a wealth creating manufacturing country, governments have always looked at the industry favorably.

Over the past few decades, China’s super growth was fuelled by a boom in its steel industry which the nation has dominated.

As economies around the world have advanced, the steel industry has also grown exponentially. In the 1950’s world steel production was estimated to be around 189 million tonnes and the production rose rapidly to 1,621 million tonnes by the end of 2015.

In the U.S., the company U.S. Steel which is over a century old is one of the nation’s premier steel manufacturers and has adapted its business processed to changing times. The company invests a lot in Research and Development and is often tasked with developing new types of steel to assist in the future nation building.

The United States ranks at the fourth place when it comes to steel production, behind India and Japan, while China has become the world’s largest steel production nation as of 2015. China’s dominance in the Steel industry is seen by the fact that the nation exports nearly most of the different types of steel, and accounts for just under 50% of the world’s total steel production. 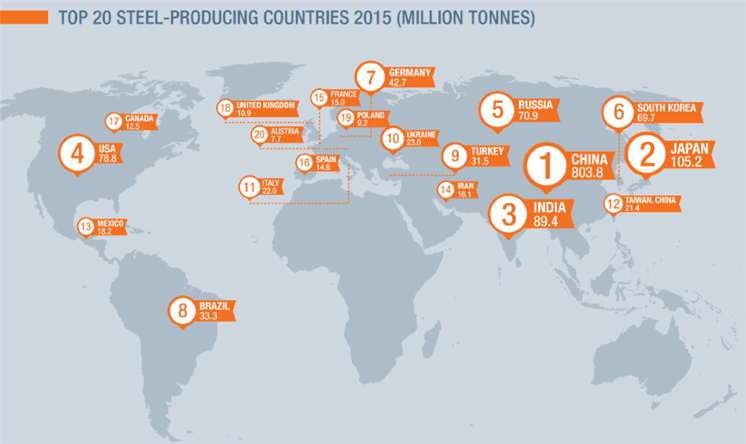 “Steel is the food of industry, the food of economic development. At present, the major problem is that countries that need food have a poor appetite so it looks like there’s too much food.” Chinese commerce ministry spokesman Shen Danyang (Source)

In June last year, as the U.S. and Chinese officials met in Beijing, the then U.S. Treasury Secretary Jacob Lew aptly addressed the problem by calling it damaging.

Mr. Lew was referring to China pumping out steel, solar panels among other goods more than what was needed in a bid to flood the markets, keeping its workers employed while hoping that the strategy would help China to maintain its growth rates.

Most of the steel factories in China are state-owned, meaning that they enjoy big benefits as they receive a lot of subsidies from the government. This puts China’s steel companies at a competitive advantage as they can offer products at a lower price.

The rapid rise of China in the steel industry was evident by the fact that in the past 15 years, China’s steel production nearly doubled.

The chart below shows China’s steel output rising to nearly 45% and more of the share of the global steel output.

China steel production and its share of global output

This rapid rise of China’s steel industry obviously came at the cost of Japan and Britain and even the U.S. steel industry taking a bit hit. It is speculated that China’s steel prices became so competitive that products started being sold below their cost of production price.

This sent ripples across the global steel industry as prices started to fall rapidly. As of January 2016, steel prices in the U.S. were down 39%.

U.S. steel companies such as U.S. Steel Corp. announced huge losses last year, as shares and bonds in the company fell sharply after the company posted the third biggest quarterly loss on record.

China has pledged that it will trim its steel output and would bring down the production capacity by up to 150 million metric tons by 2020 following criticism across all corners of the world.

Although China has promised to take measures to curb the production of steel, latest reports suggest otherwise.

A new report released by Greenpeace East Asia and Chinese consultancy firm Custeel shows that China’s promises to limit steel production is just “smog and mirrors.” The report concluded that on the contrary to what China said, the steel industry saw a net increase in the operating capacity which is said to be equal to twice that of Britain’s total capacity.

What are the top steel companies in the world?

ArcelorMittal: ArcelorMittal is headquartered in Luxembourg and was founded in 2006 following the merger of Arcelor and Mittal Steel. The company operates in over 60 countries and is produces 10% of the world’s steel.

Nippon Steel & Sumitomo Metal: NSSMC was formed by the merger of Nippon Steel and Sumitomo Metal in 2012. The company is the second largest steel producer in the world with operations in more than 15 countries.

Baosteel: Baosteel group is based in Shanghai China and is a much older company, having been established in 1978. The company specializes in production and manufacturing of different types of steel products.

Posco: Pohan Iron and Steel Company, also known as POSCO was formed in 1968. At one point, the company was the top steel manufacturing company before giving up its coveted spot to and industry that is clearly dominated by China. Posco is headquartered in South Korea.

Jiangsu Shagang: A privately owned company, Jiangsu Shagang was formed in 1075 and is one of the top five steel producing companies in China. The company boasts of nearly 18 million tons of iron with a rich product base.

The steel industry and the U.S.

The Steel industry in the U.S. is no doubt in a deep crisis. Seen as a backbone of the American manufacturing sector, the steel industry is seen as a critical part of the world’s water, food and national security.

From a military perspective, steel is widely used, from building tanks to aircrafts and submarines. The industry has no doubt come under strong pressure as the world markets started to be flooded by cheap steel imports.

In 2015 along it is estimated that over one in three tons of steel that was sold in the United States was produced outside the country. For the American economy, steel goes beyond its use in different aspects. The industry employs hundreds and thousands of workers but this has put the industry into a lot of stress.

According to 2016 data from the American Iron and Steel Institute, the U.S. imports of steel rose to a record 29% for the full year of 2015. The cheap prices and increase in imports has hit the U.S. steel companies which started to see declining production.

Domestic shipments of steel fell 12% in 2015, compared to the year before. While China has been constantly named as the biggest reasons for lower prices of Steel, things could change especially if the new U.S. administration follows through on its promises.

The effects of China’s steel production has hit not just the U.S. economy but also a wider range of economies, from Mexico to the UK which had to deal with laying off workers and shutting down plants. The most widely covered story in recent times was of course Tata Steel which was forced to cut down its operations in the UK, as a result of China’s dumping tactics.

The key issue has been the fact that the global steel markets are still reeling under the overcapacity. Average estimates put global steel capacity excess around 600 – 800 million metric tons and until this spare capacity is absorbed, it is unlikely to see any major shifts.

Despite the oversupply of the steel market, experts are predicting that growth will resume in the coming years. Most of this optimism is fuelled by lower imports and increasing demand from the construction and energy sectors.

The Steel output in the U.S. is expected to increase 4.4% in 2017 according to a survey of 20 analysts conducted by the Financial Times. The rising trend was actually seen since 2016 as countries such as the U.S. and the EU have begun to clamp down on the imports of steel from China.

After the election of President Trump who has vowed to bring jobs back to America and to revive the manufacturing sector, shares in some of the steel companies in the U.S. rallied. This rally was in part due to the President promising infrastructure spending while also ensuring to follow trade practices that were fair to the U.S.

Republican President, Donald Trump has been very vocal about bringing back manufacturing jobs and has also named China couple of times for its rigging of the exchange rate and also making its products deliberately cheaper.

However, it is likely that the U.S. administration must take further steps. The previous Obama-administration imposed anti-dumping duties on some types of steel and other metals imported from China but it has done little to curb the influence on prices.

For the steelmakers in the U.S. to maintain any semblance of gains, the markets will need to closely monitor the policies that will be implemented by the U.S administration.

Among a series of possible means for supporting the U.S. steel industry including deregulation of the industry, cutting corporate taxes for the steel industry and implementing the $1 trillion in infrastructure as promised by President Trump during the campaign trail.

Steel companies such as AK Steel, Nucor, Steel Dynamics and U.S Steel Corporation are widely touted to be one of the top companies that could gain if the U.S. continues to tighten its grip on curbing steel imports from abroad.

While China steel makers might have enjoyed a decade of growth protected by government subsidies, the fact that the larger global market has caught on to the practices is clearly a signal that the tide is changing.

Beside the above, the U.S. steel industry will be facing headwinds from other factors which need to be considered. Within the usual narrative it is easy to focus on just the global over-supply issues from China.

Among a number of factors that will also influence steel prices in the U.S, the oil and energy prices are likely to be one of the cornerstones. For the moment, the recent uptick in energy prices helped in its part to push steel prices higher, but further momentum is needed.

Capacity utilization remains a key issue among U.S. and even European steel makers who have had to bear the brunt of cheap imports from China.

The current landscape in the steel industry might make for attractive hunting grounds for investors looking to pick up stocks at a discount.

While the winds have been favorable to China led steel companies for nearly a decade, the fact that the international markets have already started to implement various measures to curb the unfair trade practices is reason enough to provide optimism in the steel industry.

What is the best way to learn from and mitigate our trading stress? We feel as though this is a particularly important topic for traders, and especially newer traders. And along those lines, we know...

How China ETFs measure up Against Other Emerging Markets

Emerging markets and China have become increasingly popular among investors over the past decade especially as growth in the developed countries started to slow. Back then, the emerging market...