Reversion to the mean, or "mean reversion," is just another way of describing a move in stock prices back to an average. This could be a moving average, a volume-weighted average price (vwap), or any other average, like a value line within a channel, for example. Often a mean reversion will occur when asset prices become extended in either direction.

How to create a mean reversion trading strategy?

The best way to create a mean reversion trading strategy is to study trending stocks. When a stock trends, it tends to put in a series of higher highs and higher lows, or lower highs and lower lows, depending on the context. Astute traders who study the charts of these stocks can often find inflection points where the price becomes oversold or overbought.

When a stock enters this over-extended territory, it can become a ripe candidate for a reversal back to the mean (average). In other to create a mean reversion trading strategy, you'll need a few things:

We've written an entire post on how to trade trends, so be sure to check that out in addition to the information below.

Which moving average is best for mean reversion?

In this example, we'll be using the 10sma, the 20ema, the 50sma, or the 200sma. In our trading, we've found that these often provide a good indication of the shorter, intermediate, and longer-term trend. As such, these moving averages will often come into play as a stock rises and falls along its upward path. In other words, these often represent the best targets for mean reversion trades. 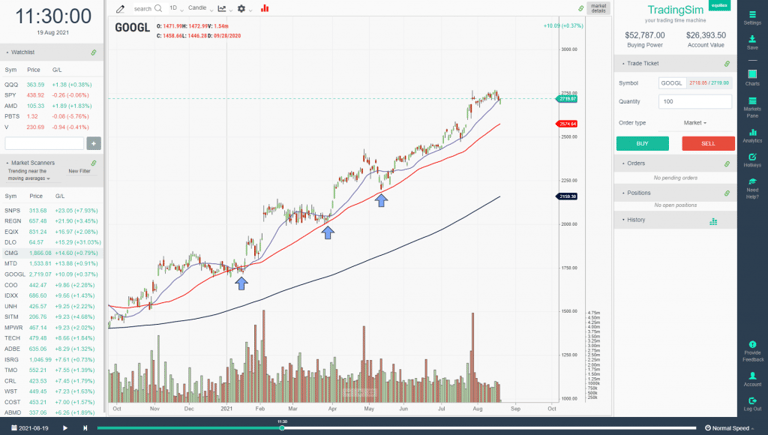 In this example, we have the 20ema in blue, the 50sma in red, and the 200sma in black. For a moment, just visualize all three of these on the chart and their relation to each other. Notice that as the 20ema becomes extended from the 50sma, it often signals a pullback to the 50sma as "check in".

In a healthy trend, you will likely see a stair-step upwards until the move reaches a climactic pitch, signaling the end of the trend. For this mean reversion trading strategy, the entry criteria are quite simple. As you can see from the blue arrows, you look for a confirmation of support along the 50sma, then go long on the pocket pivot with increased volume as price moves back through the shorter-term moving averages.

If moving averages aren't your thing, channels can be a great way to judge the support and resistance of any trend, vertical or horizontal. Not only can it help visualize where support is coming in at the lows, but also where resistance is being met at the highs.

The best way to draw channels for mean reversion is to connect two points on either side of the new trend formation, the top or the bottom. Once you've drawn your line, clone the line on the other side of the developing channel. The more channels you study, the better you'll get at judging the support and resistance sooner in the trend.

Let's take the Google chart that we used above, but repurpose it with channels instead of moving averages, this time. Pay close attention to the way in which GOOGL overthrows the upper bounds of the channel ever-so-often. This is an important observation.

An overthrow of a channel signals an acceleration of price movement. You'll want to pay close attention to these events because they often signal reversals. They can be a lot like springs and upthrusts in horizontal channels. When the price acceleration fails back into the channel, it provides a good entry signal with a definable risk area just above or below the overthrow price area.

If you are long, it can be a great way to judge when to sell some of your profits into climactic price action. Then, as you can see from the green arrows in the channel above, the support area provides a great risk/reward area to add back to your positions. We call this "campaigning" a stock. Paying yourself along the way, then adding back into support areas. 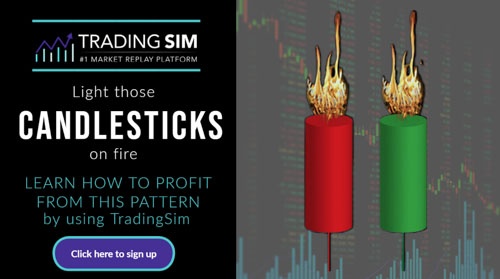 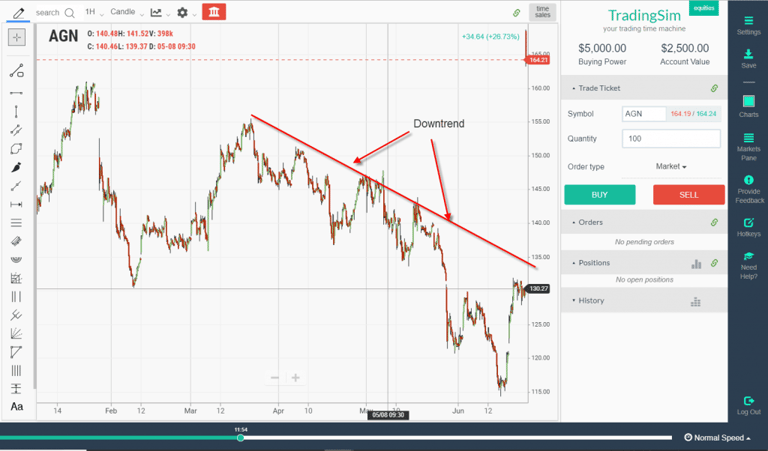 As the asset approaches the mean, it's your goal to determine the strength of the pullback and the broader context of the stock or stock market. Either way, these areas of resistance often provide very good risk to reward for short-sell trades.

One thing you should notice in the image above, however, is that eventually, the stock becomes EXTREMELY oversold. Notice how it breaks the lows of the channels also, entering a free-fall. This is another opportunity to capitalize on a mean reversion trade called a parabolic reversal strategy.

When a stock goes parabolic, it often becomes the target of many traders looking to take advantage of the mean reversion trade. While stocks can continue their upward or downward momentum much further than many traders would suspect, they can't go up or down forever. Eventually, supply or demand will reverse the course.

But, how do you time this properly? First, let's examine the difference between a parabolic stock and a healthily trending stock in these two images: 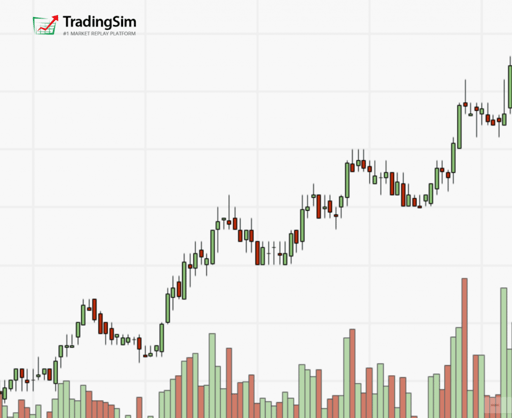 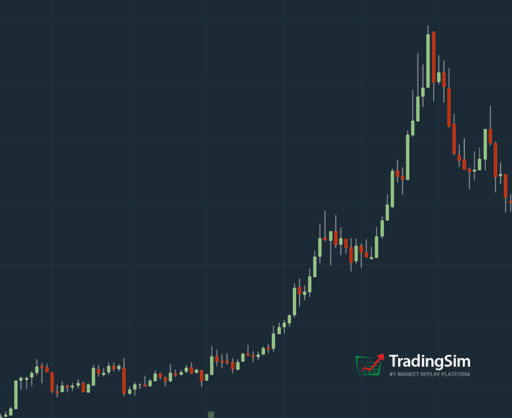 Notice how the first image in white background is following a steady trend upward. The second image in the black background is going parabolic. What differentiates the two? Essentially, the slope of the incline. In parabolic stocks, FOMO is often reaching a fever pitch that is unsustainable. 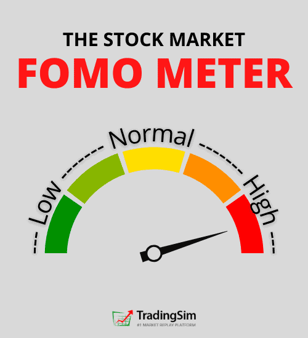 The higher it goes, the harder it is likely to fall. But to take advantage of the mean reversion trade, you need to look for a few things: a bearish candlestick pattern and a potential resistance area on a longer-term time frame. If the latter doesn't exist, you'll simply have to use your own judgment with multiple time frame charts or moving average extensions.

Let's dial into the parabolic stock above and analyze how you could have used a bearish engulfing candle to time your entry into the trend acceleration. This stock was $EYES: 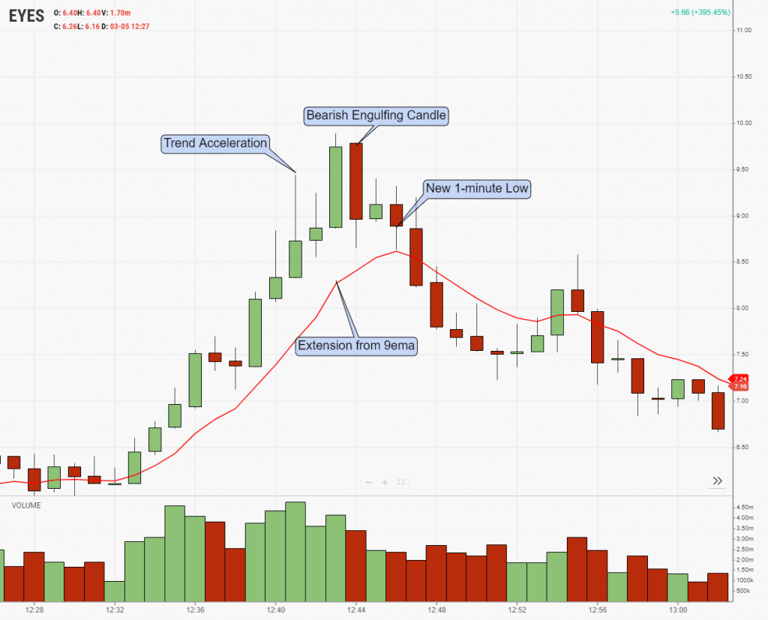 As the trend accelerates, you notice that the stock becomes extended from the 9-ema on a 1-minute chart. It then overcomes and squeezes the first two hammer candles. It then produces a large red bearish engulfing candle that stops the upward momentum, leading to two lower highs on the backside of this trade.

Let's look at what would confirm this trade for us:

Altogether, this created a great opportunity to short a stock back to the mean. But where would your target have been?

One of the best ways to find a target for a mean regression trade is to use not only the moving averages but also VWAP. VWAP is a measure of the volume-weighted average price of a stock on an intraday basis. When you're day trading, it can be a great tool to target a reversion to the mean.

In this example with TSLA, we see a sharp decline that wasn't sustainable in the morning trading session. After confirming 3 bullish reversal candles and a gravestone doji, TSLA marched right back to the VWAP in red.

If executing this trade based on the concept of mean reversion, you have two targets here. The first target is the VWAP line. Then, using trade management techniques, you could have held for higher prices by putting a stop below the candle that broke vwap. As the price moves higher, you simply move your stop to below each candle producing a new high.

Had you employed this trade management rule, you could have taken half your profits at vwap, then held for a push to the high of day as target 2. You would not have been stopped out until the $753 area, another $9 above vwap!

How to practice the mean reversion trading strategy?

The bottom tail formation is a trend reversal pattern that comes at the end of a down move.  Below is the setup for the bottom tail pattern: There is a downtrend in progress Select two popular time...

5 Tips for Confirming and Trading the Bump and Run

The bump and run chart pattern is a rare formation. So, to make things simple, we will walk you through 5 easy steps for identifying the pattern. I am not going to stop there though. I will also...