How to Invest in Marijuana ETFs

Introduction to the Marijuana Sector

Marijuana or Cannabis; be it the use or production was once clouded in controversy. However, the industry has gone through major leaps and bounds in recent years. The still nascent industry is forecast to reach $97 billion globally by 2021.

Over the past few years, the marijuana industry has become somewhat of a gold rush. In 2016 alone, the legal marijuana market had an estimated revenue of over $7 billion. The next few years are expected to see further room for growth.

Marijuana and the United States of America

In the United States, Marijuana is going through the legalization process at an extremely slow pace state-by-state.

The District of Columbia, along with nine other states in the U.S. has legalized marijuana for recreational use. Even more states are expected to join in legalizing marijuana. As a result, investors are hoping to take advantage of the market early before it reaches mass hysteria.

Well, in this article, we will take a step-by-step approach for how to invest in Marijuana ETFs, so you also take advantage of this investment opportunity.

I mean who wouldn’t want to invest in the next Budweiser of marijuana?

One nation that is keeping investors excited is Canada. Canada was the world’s first nation to legalize medical marijuana in 2001.

Canada is also expected to legalize the use of marijuana for recreational purposes this year. At the time of this writing, Canada’s House of Commons has already approved the legislation.

Despite the legalization, there are quite a few details to work out. But this has not deterred market watchers and marijuana investors alike from staying optimistic.

A number of companies have already prepared plans in the run up the legalization of Marijuana for recreational use.

Global spending is expected to grow by over 200% to $32 billion by 2020 in the United States alone, data from market research firm Arcview/BDS analytics show. 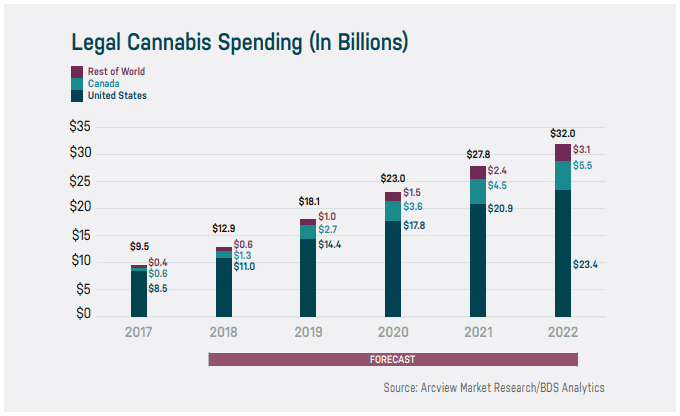 It is not just Canada, but Germany as well. Germany allows the use of medical marijuana through its 20,000 pharmacies.

What are the Top Three Companies in the Marijuana Sector?

Before you invest in Marijuana ETFs, it is important to become familiar with the top publicly listed companies in the sector.

Scotts Miracle-Gro (NYSE:SMG) is a NYSE listed marijuana stock. It has a market cap of $4.85 billion with price to earnings ratio of 20.56. The stock also has a 2.43% dividend yield.

The company is domiciled in the United States. After losing over 20% since early February 2018, the stock is currently a hold. Trading $86.31, analysts estimate a one-year price target of $93.

The decline in the stock is attributed to temporary factors such as regulation and implementation issues in California. The company had recently acquired Sunlight Supply making it the largest hydroponics supplier in the U.S.

The potential opening up of markets in Michigan and Massachusetts are expected to push the price higher in the coming months.

Canopy Growth Corp (NYSE:CGC) is another stock on the NYSE. The company has a market cap of $5.95 billion and has generated strong returns since going public.

Canopy Growth is a Canadian based grower and on a year-to-date basis, the share price has surged 25%. The company focuses on the use of recreational marijuana which is expected to open up this year. With its main focus in Canada and the speculation of Canada easing rules on cannabis use, the company is expected to keep the momentum going.

Besides Canada, Canopy Growth also has a presence in Germany. The fiscal fourth quarter results showed record sales in the country.

Aphria Inc. (TSX:APH) is a Canadian marijuana company that trades on the Toronto Stock Exchange. The business model is similar to that of Canopy Growth. The stock has been down over 30% this year.

The strong point for the company is its retail distribution network. Along with Canopy Growth, Aphria Inc. will likely surge once Canada passes the bill on recreational use of marijuana.

The recent deal with Southern Glazer’s a wine and spirits distribution company is also expected to follow in the footsteps of Canopy Growth with a beverage.

Some reports suggest that Aphria Inc. is in talks with Molson Coors Brewing for a potential deal in the cannabis infused beverage business.

As with any sector, an index is the best place to start if you are not very familiar with individual stocks.

The North American Medical Marijuana Index, as the name suggests, tracks the performance of a basket of listed companies. The companies in the composition of the index have significant business exposure to the marijuana industry.

Companies need to be a producer or a supplier to be listed on the North American Marijuana index. It also includes biotechnology companies focusing on research and development of cannabis.

At the time of this writing, the North American Marijuana index has 49 companies listed.

Almost all of the companies listed in the index are domiciled in Canada (74%), the U.S. (16%) and Great Britain (10%). The index also reinvests the dividends.

Since its inception in 2017, it has yielded impressive returns of 35% per annum.

A Primer on Marijuana ETFs

As of the first quarter in 2018, there are just five marijuana ETFs that investors can choose from.

Below we have provided write-ups on all five. 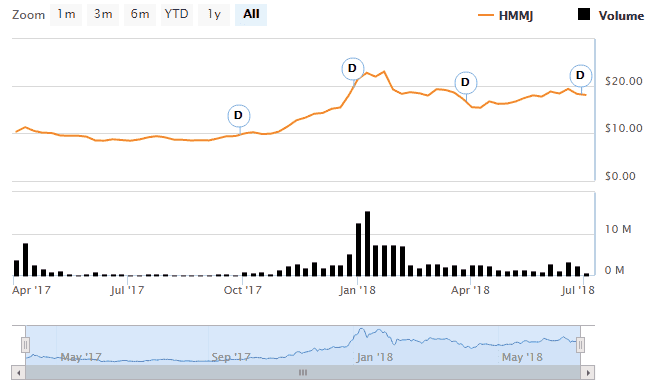 The fund’s top three holdings are: 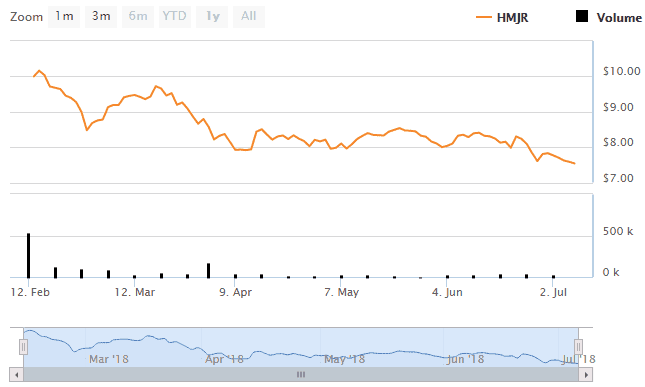 HMJR allocates 20% of its holdings toward companies based outside the United States. Compared to HMMJ ETF, you won’t find the traditional stalwarts of the industry.

Due to the small market cap and the rather small assets under management, this ETF yields higher returns. But the higher returns also come at the risk of higher volatility.

The top three holdings in SEED ETF are:

Although ACT is not a pure marijuana ETF, the composition helps to ensure bringing diversity. The ACT ETF was issued in December 2017 and is an open-ended fund. AdvisorShares Vice ETF has an expense rate of 0.75% with $13.14 million in assets under management. 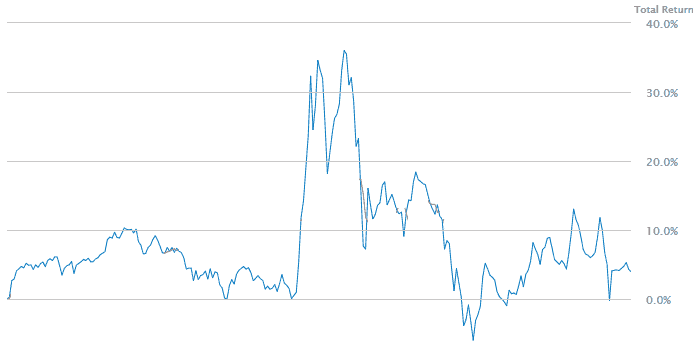 How to Purchase Marijuana ETFs?

It is obvious that most of the companies in the marijuana sector are based in Canada or outside the U.S.

In the U.S., to purchase marijuana ETF’s, you need to have an account with an online broker.  You can of course purchase the U.S. based ETFs – Alternative Harvest ETF (MJX) and AdvisiorShares Vice ETF (ACT).

In order to purchase the Canadian ETFs, you will need the assistance of a local broker who can then execute the order on your behalf.

Marijuana ETF investors who are non-residents of Canada cannot hold more than 40% of the ETF’s units.

Most marijuana ETFs, such as the Horizon ETFs are not regulated by the Securities and Exchange Commission (SEC).

Risks of Investing in Marijuana ETFs

Although the industry is still in the early stages and that it offers a great potential, there are some risks.

A great example of this is the ETFMG Alternative Harvest ETF. The marijuana ETF started off with a bang in early 2018. The ETF attracted over $400 million of net inflows. A few months later, the ETF’s net inflows began to fall.

A major part of this decline of inflows is due to the legislative efforts in the U.S. A few months ago; the Trump administration announced that it would let the states decide on whether to legalize marijuana use.

Investing in marijuana ETFs does offer investors a way to earn higher returns. Due to the volatility in the marijuana ETFs it is not advisable for all investors. The uncertain regulatory environment, possible consolidation and the high beta of the stocks are some things to consider.

Still, for investors who are willing to take risks, jumping on board the marijuana train can certainly offer benefits.

As with anything, it is imperative that investors understand their risk profile before investing in marijuana ETFs.

How to Diversify Your Portfolio with Emerging Market ETFs

Investors can choose from many US-based stocks and exchange-traded funds (ETFs). However, emerging market ETFs may be an option if a trader wants more diversity in their portfolios. ETFs that track...

What are the Most Popular Gold ETFs?

In this article, I will touch briefly on the background of Gold ETFs and then dive into the most popular gold ETFs centered around the commodity. Table of Contents Gold ETFs Overview Three Types of...

How China ETFs measure up Against Other Emerging Markets

Emerging markets and China have become increasingly popular among investors over the past decade especially as growth in the developed countries started to slow. Back then, the emerging market...