When the U.S. Federal Reserve hikes interest rates, it can be for a number of reasons, ranging from rising inflation to an overheated economy. Regardless of the reasons behind the Fed’s rate hike, the impact of this decision is felt across different corners of the bond market world.

Bonds are important as they determine the government’s rate of borrowing. Bonds are after all debt instruments in order for the government to raise additional cash. It is partly because of this that bonds are considered to be a safe investment as they are backed by the full faith and credit of the U.S. Government.

The price at which the bonds trade, are set in part by the central bank and the bond traders who account for a number of reasons, ranging from inflation expectations, interest rate expectations and of course the government’s ability to repay the loans.

The above explanation seems simple enough, but the question still remains as to how a bond investment will be affected when interest rates change. While the term bonds is often used as a blanket term for the debt securities, the way the bonds behave to interest rate changes depends on a number of factors.

The official names for the different Treasury securities are bills, for the very short term maturity securities which expire in 3 months or less from date of issue, Treasury notes which are evenly balanced and come for a term of 10-years as an example and finally bonds which are longer dated maturing debt instruments. New bonds are issued all the time and like existing bonds, the new bonds are also subject to interest rates risks. 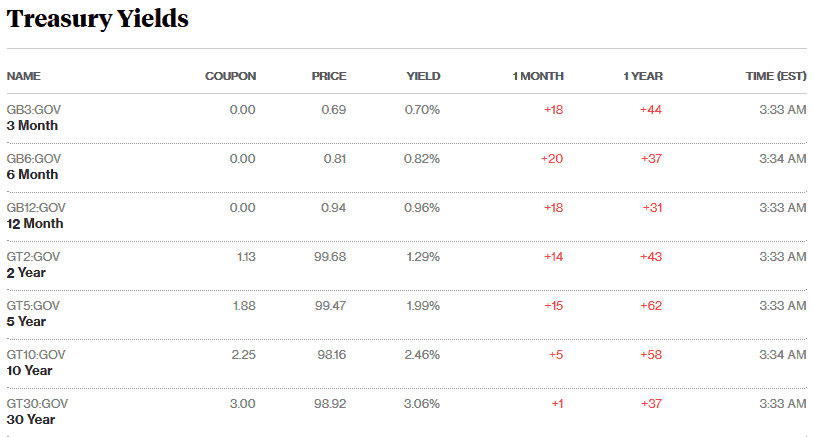 Bonds differ by maturity, the coupon rate at which they were issued, the issuing authority of the bond, inflation expectations and so on. All these factors play a major role in figuring out how bonds react to interest rate changes, which can b a complex task.

On top of the above, bonds are viewed as one of the safest investment options, not just among U.S. investors but also globally. Thus this factor is also something that needs to be considered when talking about interest rates and bonds.

How interest rates affect the value of bonds?

However, without a doubt, the interest rates are the biggest threat to bond investors which needs to be factored in when trading bonds, especially the 30-year Treasury bond futures.

For example, when you purchase a Treasury bond that has a yield of 3% and the interest rate was hiked to 3.5%, the bond that you had purchased falls in value as there are no takers for the bond at the price at which you purchased the debt instrument. 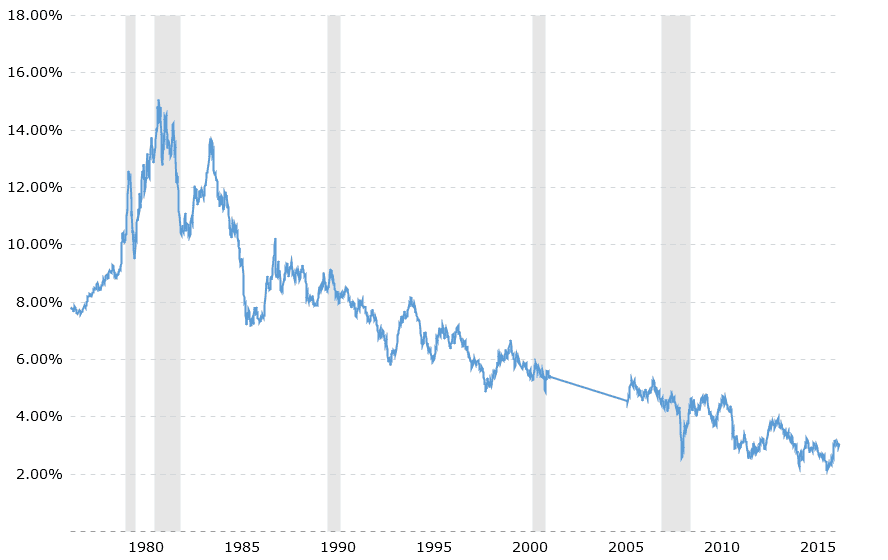 Thus, to be able to sell your bond that yields 3% against the current interest rate of 3.5%, you will have to offer a discount on your bond purchase.

On the other hand, if your bond yields 3% but interest rates were cut to 2%, then the bond that you hold would go up in value as it yields higher rate than the current interest rates, thus you can charge a premium on top of your original price that you paid for the bond.

The above is quite simple as it seems, but there are some factors that makes each of the bonds different in its characteristics. These factors determine how much price a bond will decline or fall, adjusting to interest rates.

Over the past 30-years or so, bond prices have been in a bull market (meaning that yields have been steadily falling) and investors paid a premium to buy or hold higher yield bonds, however with the short term interest rates set to be hiked and rather rapidly after decades of low interest rates, that is set to change.

What happens to bonds when interest rates rise?

This is a commonly asked question among investors as to what happens when interest rates rise. Technically, bond prices fall as interest rates are hiked as investors prefer the higher yield that comes with newly issued bonds compared to old or existing bonds.

Generally speaking, the longer the duration of the bonds, the greater the price sensitivity will be to changes to the interest rate. To better understand this, investors need to look at the role played by the bond’s coupon in an environment of rising interest rates.

In the case of Bond A where the coupon rate is zero, the coupon payments have a duration that is equal to its term because the bond pays out in full towards its maturity. When interest rates rise, Bond A will depreciate in value, whereas when interest rates fall, the Bond A appreciates in value.

Based on the above examples, coupon rate and duration also influences the prices of the bonds. Higher the coupon rate and shorter the duration, the more valuable the bond becomes compared to a bond that pays the same coupon rate but has a much longer duration.

Before the maturity date for the bond, the bond price can continue to fluctuate. Thus, if newly issue bonds yield just 2% as an example, investors will not hesitate to pay a premium on older bonds that pay 4%. Thus, the older bonds’ prices would rise until its annual earnings equals that of the yield offered by new bonds. When rates are hike, the effects are strongly felt on longer maturity bonds as the effects of dealing with higher interest rates lingers over a longer period of time.

How much do bond prices changes when rates are hiked?

To understand how much the bond prices changes and thus to draw a rough idea on how to factor in rate hikes into the 30-year bonds, it is important to know the variables that are influenced.

The longer the maturity for a bond or the bond investment, the more volatile it is for the prices. The reason why maturity plays an important role in determining the value of a long term bond is because of the interest rates that are being paid.

Coupon rates are also another variable that needs to be considered when factoring in the influence of interest rates on long term bonds. A higher coupon rate will mean that more cost in the form of the interest is paid during the bond’s maturity. In other words, when interest rates rise, the future cash flows are discounted at a higher rage.

In such cases, the lower coupon bonds have more cash flow in the future with the maturity value of the bond also representing a greater portion of the cash flow.

The following table shown in the picture below, courtesy of AAII shows how much bond prices can change based on interest rates.

The chart is based on the assumption that the bonds are paying a semi-annual interest rate payments and the bonds are selling at the face value and due to the relative changes, the gains are higher than the losses when the interest rates change.

To understand the table, take the following illustration.

Now, if interest rates were hiked by two percentage points to 8% then in the above example, the bond will decrease in value by 22.6%, which brings it to $774. The gains and losses are due to the longer term nature of the 30-year bonds.

Driving the value of the change is also the amount by which rates can be changed. For example a 1% rate cut could increase the 30-year bond prices by 19.7%, while a similar level of a rate cut could bring down the bond prices value by 15.5% approximately.

The above fluctuation in the 30-year bond prices, relative to interest rate hikes or rate cuts, are only for reference and is by no means an absolute figure.

Since the onset of the recession, the Federal Reserve has been steadily pushing rates lower and things started to change only in late 2015, which still saw most market participants rule out sustained rate hikes. But things are changing.

ince the end of 2008, the Fed funds rates averaged around 0.13%. Prior to the 2015 rate the last rate tightening cycle occurred between 2004 through 2006 following the previous decade which saw the burst of the dot com bubble.

Data shows that longer maturing bonds don’t have the same trajectory as that of the shorter duration bonds such as the 30-day Fed funds rate or the 1-year Treasury. The long term debt instruments are determined by a much lesser degree by the changing interest rates and more with the long term expectations of growth.

In conclusion, bond markets are extra-ordinarily diverse and complex to say the least. Still, all bonds are nothing but loans given to the government from the investor. Despite the complexity, bonds are still very simple instruments. Buy a bond with $1000 which yields 4% for a 30-year period and you receive $30 a year in interest over the 30-years and then you also get back the original principle of $1000.

Between purchasing the bond and the 30-year maturity of course are different variables such as the interest rates changes, inflation and its influence on the principle amount and so on which eventually brings the complexity to the bond markets.

There are a lot of factors that go into determining the price and yields of 30-year or longer maturing bonds. The Federal Reserve for its part can only influence the short term interest rates such as the fed funds rate, which is used as a benchmark for lending and borrowing by banks for overnight loans.

When it comes to the long term rates however, the Fed does not have that much influence because investors demand a premium for the risks of uncertainty that comes with the duration of the bond.

The risks that demand a premium include factors such as higher inflation which needs to be accounted for, for the duration of the bond’s term. After all, a dollar owned today is not the same in value as the dollar you will own tomorrow.

The long term rates are however, in part a bet on where the short term rates can be in the future.

How to Day Trade Futures During a Fed Announcement

The U.S. Federal Reserve’s monetary policy meetings are one of the key economic events for traders and investors alike. Although the central bank’s policies are targeted towards controlling the short...

9 Reasons Why I Do Not Trade During Lunch

It took close to 19 months for me to realize that I made the majority of my gains between 9:50 am and 11:00 am.  I spent countless hours trying all types of techniques to gain an upper hand when...