How Have European ETFs performed after Brexit

Despite the fact that the Eurozone often comes across systemic risks that often threaten to break the European Union, the ETF landscape for the European focused equities continues to grow steadily. More recently, the European ETFs were yet again put to the test with June 2016 Brexit referendum, which saw the UK voting to leave the EU membership.

Interest in the European ETFs has been increasing lately with growth prospects picking up including volatility.

ETF investing in Europe remained rather flat since the start of the 2012 Greece sovereign crisis. With the entire region mired in stagnating growth and rising unemployment, investors often preferred other markets than Europe. Volatility was also quite low despite the heightened Greece crisis which almost threatened to put Greece out of the shared currency.

Despite falling out of favor, European equities and ETF investments started to increase, largely as a result of the Brexit referendum, which was widely publicized.

The pick-up in investment also got a boost by the European central bank which started its own over of quantitative easing which managed to prop up the equity sector. With bond yields low, investors had nowhere else to go but to the stock markets. European ETFs were primed for opportunity.

The surprise Brexit vote brought about even larger interest in the European markets as to the world the “unthinkable” had happened. While there have been winners and losers, demand for European ETFs has never been higher.

Investor’s appetite for ETFs has been slower compared to the U.S. counterparts. It is estimated that only 11% of households directly own funds compared to 40% in the U.S. This brings about an important point that most of the ETFs and other funds are largely institutionally owned.

Most of the net inflows seen in the European ETF market were as a result of the stock market performance, which alone accounts for nearly 69% of the ETF portfolio. The European bonds make up for 26% coming in at a close second.

The use of exchange traded funds have no doubt evolved significantly over the years and continues to attract new investors which is seen as a reason for the evolution and the competition among various European ETF issuers.

The demand for European ETF market has led to lower fees and launching of new products in the core ETF ranges as well as switching the replication methods.  There are also different products in the ETFs including currency-hedged and strategic beta ETFs.

Still in comparison to the U.S. ETF landscape, European ETFs are said to be only miniscule, account for just 5.5% of the total investment in Europe.

In comparison, the U.S. ETF landscape accounts for 12%. The exchange traded products are yet to gain wider acceptance from the mainstream investing community.

Among the major players in the European ETF market are iShares which is the biggest by market share followed by db X-trackers and Lyxor.

European ETFs and the Brexit vote

The reaction to the Brexit referendum was surprising, if not shocking. Investors were largely caught off guard as just about everyone expected that the UK will vote to remain in the European Union.

The surprise result of the referendum however saw the markets, ETFs included re-pricing thereafter. European equities came under intense pressure which bore the brunt of selling across the different sectors. It was even harsh with UK ETF and equity markets.

The Brexit referendum vote saw investors losing confidence and also increased uncertainty among other countries that could follow suit. 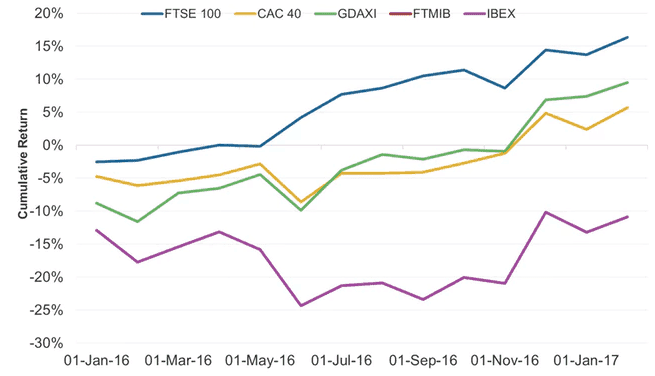 However the initial knee-jerk reaction to the Brexit referendum was short-lived as the markets started to recover. The reaction was mixed as the Frankfurt Index (DAX) was down by around 6%, the French CAC40 was sown by 8%. Losses were bigger in countries such as Spain, whose benchmark IBEX was down more than 20%.

Besides the Brexit referendum, there were other risks across the Eurozone, namely Italy’s banking crisis. This sent banking and financial shares tumbling as Italy’s Unicredit and Spain’s Banco Santander were down by more than 20%

Top European ETFs and their performance after the Brexit vote

According to some estimates, the recent uptick in inflation and also a broad improvement in the unemployment rate have started to bring some optimism back to the European markets.

European equities are expected to post double digit growth, higher than the U.S. counter parts and even higher than other international regions. The rebound in the corporate earnings is said to be another factor, coupled with the fact that the ECB is now also turning hawkish, and primed to being its tapering process come April.

Over the past year, European equities have no doubt been on a rollercoaster ride. With volatility picking up, investors who have managed to play it right are seen being rewarded with big returns.

Business activities have also seen picking up as a result of the weaker exchange rate of the Euro and the easy monetary policies that were supporting it so far. With the markets expected to maintain the momentum, growth in the Eurozone is only set to rise over the coming months.

This brings us to the question on some of the top ETF’s and their performance prior to, during and after the UK’s referendum vote to leave the EU. The European equity ETFs make up the majority of the ETFs in the region and offers investors access to a broad and diversified set of ETF products across the eurozone.

Below are the top five European ETFs as we take a look at their performance after the Brexit vote in June last year.

At the top of the list is the WidsomTree Europe Hedged Equity Fund (HEDJ) offers investors direct access to the equities in the Eurozone. The fund focuses on large cap companies on the European exchanges.

The HEDJ is often viewed a currency risk hedge play against the U.S. dollar. It was incepted in December 2009 and boasts of over 9,187 million in assets under management at the latest count. The HEDJ comes with an expense ratio of 0.58%.

Among the sectors, the Consumer and cyclical goods makes up for nearly 19% of the HEDJ composition, making this one of the safer ETFs. Financials, which can be called Europe’s Achilles heel ranks at the fourth place with 13% in composition.

The WisdomTree HEDJ ETF is no doubt one of the top favorites, although the expense ratio of 0.58% can be viewed by some as being a bit too expensive. Still, ignoring the expense ratio, the ETF structure for HEDJ suggests that this ETF will no doubt fare strongly especially against potential risks to the Eurozone.

Vanguard FTSE Europe ETF (VGK) is an asset class that focuses on equities. The fund is older than that of HEDJ with an inception date of March 10, 2005. The VGK FTSE ETF has $11,016 million in assets under management and the ETF focuses on ETFs from the most developed economies spread across more than a dozen markets.

The VGK is widely seen as an exchange traded fund that can be efficiently used to gain a higher weightage towards European equities. The VGK has nearly 500 component securities and is broadly balanced with not one security being able to influence the fund directly.

The VGK has an expense ratio of 0.10%, making it one of the lowest among the European ETFs. Some of the big names in the VGK’s composition include Novartis, Nestle, HSBC holdings among other names.

VGK has managed to rally back towards the pre-Brexit highs that were formed after falling to a fresh 52-low of $42.73 right after the June’s referendum result. With VGK only making up for its losses, this ETF has been rather slow in comparison to the WidsomTree Europe Hedged Equity Fund (HEDJ).

The iShares MSCI EMU ETF (EZU) is another unique ETF that tracks the equities asset class. The EZU has total assets under management to the tune of $8,078 million. The ETF was started in the year 2000 and has an expense ratio of 0.50%, which is slightly higher on average.

The iShares MSCI EMU ETF is managed by Blackrock fund advisors and focuses on publicly traded securities in the European Union within the EMU markets. Thus, the ETF focuses on some of the strongest economies in the Eurozone such as Germany, France and Italy to an extent.

Some of the big names in the EZU’s composition include Total SA, Germany’s Siemens AG among other names. The EZU fund is more diverse across the sectors thus making it a better ETF option compared to other ETFs focusing on Europe.

There are a total of 250 components listed on the iShares MSCI EMU ETF with a majority of the sector dominated by the financials.

The EZU ETF was also strongly hit by the Brexit vote, as shares in the ETF fell to fresh 52-week lows of $29.71 and the ETF was seen making a steady progress since June last year.

It was only a few months ago that the EZU ETF was seen breaking above its pre-Brexit highs of $35.91. An important aspect to remember about the iShares MSCI EMU ETF (EZU) is that with the financial sector making up over 19% in composition, this ETF can get risky.

The European financial sector is definitely not in the best of health and the crisis seems to rear its ugly head quite frequently. Although the headlines from Italy have faded, the fact remains that there has been no solution yet to the Italian banking crisis.

On the same note, the Greece crisis, which is pushing the country deeper into recession, could spark yet another financial and sovereign crisis in the Eurozone.

Among the three mentioned European ETFs it is quite clear that while the equity markets will no doubt rebound against any further threats, the WisdomTree Europe Hedged equity fund (HEDJ) no doubt is one of the safest ETFs.

With the crisis in the Eurozone a never-ending story (and the current elections in the Netherlands, France and Germany that is keeping investors on the edge), choosing the right ETF can be the difference between a winning and a losing investment.

Besides the overall market strength, investors should also focus on the sectors or assets that are structured into the many European ETFs (it is estimated that there are over a 100 European ETFs) that will play a more influential role.

The type of crisis is also another factor to consider when looking at the European ETF’s. While HEDJ has managed to outperform the EZU and VGK ETFs as a an example, after the Brexit crisis it is by no means an indication that the HEDJ ETF will continue to outperform against other political risks as well.

As the French and German elections edge closer this year, investors should pay attention to the ETFs that have a strong exposure to the equities from these two countries (most of them are, considering that Germany and France are the top European economies).

Regardless, despite what happens with the political crisis that seems to plague the Eurozone continue to bring about volatility for the financial markets. Investors can look at capitalizing on the market corrections around such events by using a mix of rightly structured exchange traded funds.

In the true spirit of the Tradingsim blog, we will quickly cover the definition of leveraged ETFs, so we can dive into the details of whether you should day trade, swing trade or invest in leveraged...

What are the Best Copper ETFs?

Exchange traded funds or ETFs remain at the forefront of investing community as the products continue to make inroads into all types of portfolios and trading styles and sizes. Thus, investors at...