The chart below shows the factors that influence the yields on both ends of the scale, the Federal Reserve on one end and the Bond traders on the other end. 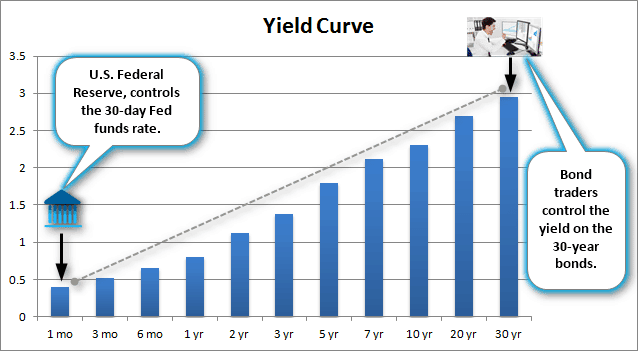 Thus, by controlling the short end scale of the interest rate spectrum, the central bank controls the economy. With the Federal Reserve fixing the short term lending or borrowing rates, all other interest rates are determined including the London Interbank Offering Rate (LIBOR) and other short term interest rates such as the one-month, 6-month and one-year loans. The Fed funds rate is also referred to as the prime rate and this is the lowest interest rate that can be charged.

The long term interest rates on the other hand are controlled by bond traders. Typically, the prevailing principle is that investors who hold long term treasuries expect to be paid higher rate of interest. Thus, bond traders who trade the 30-year treasuries often influence interest rates by buying or selling the bonds (yields on the bond move inversely to bond prices) depending on various factors.

When a country is in good standing the interest charged on long term bonds is less, but when there is turmoil, investors sell the long term bonds, thus pushing the yield higher, which in turn increases the borrowing costs for the nation.

A good example of this is the recent U.S. elections and the campaign promises by President Trump. During the campaign trail, Trump promised fiscal stimulus plans to the tune of a trillion dollars. This meant that the U.S. government, under the Trump administration would be taking on more debt to finance its fiscal stimulus plans. With the U.S. debt already near record highs, investors started to sell the long term bonds, thus pushing the yields higher as a result.

What the above chart tells us is that bond investors or the open markets have effectively sold bonds, pushing the interest rates higher. You can see that before the November 9th date, the 30-year bonds were trading in the range of 2.20% – 2.50%. But after the election results, the bond yields rose to as high as 3.15%.

What happens when the Fed hikes interest rates?

So far, we know that bond traders demand higher yield on long term maturities. Therefore, when the Fed hikes rates (on the short end of the scale), interest rates on the longer dated maturities start to adjust accordingly.

But there’s a catch. Just because the Fed hiked the 30-day FFR doesn’t mean that you will see the 30-year bond yields rise as well. On the contrary, the longer end of the bond yields may or may not rise, which as mentioned earlier in this article depends on the market forces and the perception of the economy among a host of other factors.

Many believe that just because the Fed hikes rates, yields across the spectrum start to rise. But that is incorrect. The yields on the longer dated maturities increase, based on bond trader’s perception of the economy and has nothing to do with the central bank. The Fed can only control so much when it comes to influencing the borrowing costs of the economy, but the large portion of this is left to the open markets. 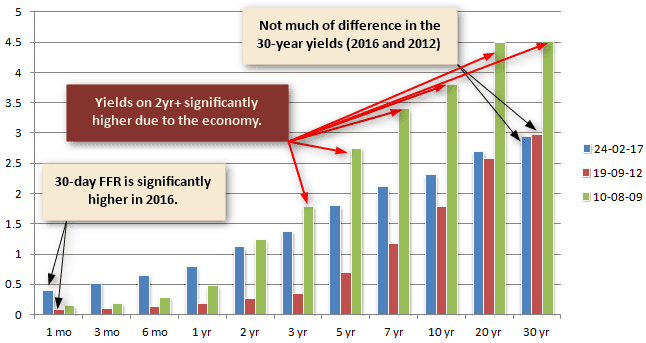 Influences on bond yields over the years

In the above chart you can see how limited the Fed’s influence is on interest rates.

Now compare these yields to the year 2010 (green column) and you can see that the yields on the 20 and 30 year maturities significantly higher. This is because of investor perception. In 2010, with the U.S. economy still reeling under the pressure of the 2008 global financial crisis, bond traders demanded higher interest rates for lending out over a 30-year period due to heightened threat of uncertainty on the U.S. government’s ability to repay the debt.

How do interest rate futures react to Fed rate hikes?

Let’s take a look at some of the most important interest rate futures contracts and how they behave to a Fed rate hike.

But the charts tell a different story. You can see how the 30-day Fed funds rate actually rose much before the Fed hiked rates.

Thus, if you want to predict when the Fed will hike rates, look to the 30-day Fed funds futures rates (ZQ futures) and not the other way around. And if you don’t believe, here’s what NY Fed President Dudley told in an interview not so long ago. “If you look at futures markets for the federal funds rate, which is the rate that we target…”

The 10-year Treasury note futures are interesting because they sit in the middle of the interest rate band. Thus, if you want to really understand which way rates are going, it is the 10-year T-Note futures, as the influence of the short term and the long term yields are equally balanced. When the Fed hikes rates, the reaction from the 10-year T-Note futures is not as accentuated as the 30-day Fed funds rates. Of course, price of the ZN futures will fall when the Fed hikes rates (and vice versa when rates are cut).

Another factor to bear in mind is that the 10-year T-notes are also sought after as safe haven securities. Therefore, prices will rise during times of economic or geo-political uncertainty, especially when the risks are overseas.

The chart above shows that ideally after the first rate hike, the 10-year T-Note futures should have continued to fall. But that didn’t happen as investors bought the T-note futures in the run up to the Brexit referendum in June 2016. You can see here that despite the Fed’s rate hike influence, the T-note futures were also influenced by other geo-political factors. When it comes to yields, you can obviously expect higher yields from the 10-year treasury notes than compared to the 30-day fed funds rates.

The T-bond futures also behave in a similar fashion to that of the T-note futures. But here, the influence of the Fed rate hikes is even more limited. The 30-year T-Bond markets are open to the forces of the traders and thus their perception on the U.S. government’s ability to repay the principle.

Sometimes, the 30-year bonds can remain muted to a Fed rate hike. This is because 30-year bond traders are looking 30-years into the future and adjust the yields based on whether they think the economy will continue to rise or not. Inflation is another factor behind the yields. When inflation expectations start to rise, you can expect the bond yields to increase as well.

As you can see there are a number of factors that affect the prices of the 30-year bonds, the Fed funds rate being just one among the many factors. Thus, the influence of the Federal Reserve’s short term interest rates has a limited affect on the 30-year bonds.

Should you buy or sell interest rate futures based on Fed’s decisions?

The answer to this should be clear by now, depending on what type of interest rate futures you are trading. The short term IR futures certainly are the most hawkish and move in tandem with the Fed rate hikes, while the 10-year and 30-year futures tend to be influenced by a lot more other factors than just interest rates.

Last but not the least, interest rate futures contracts also come with expiring months and it is easy to forget this in the larger context of the terms of the treasury notes and bonds. Therefore, the futures trader must also focus on purchasing the right futures contract so as not to get caught with a futures contract that has just a few days left to expiry.

When the U.S. Federal Reserve hikes interest rates, it can be for a number of reasons, ranging from rising inflation to an overheated economy. Regardless of the reasons behind the Fed’s rate hike,...