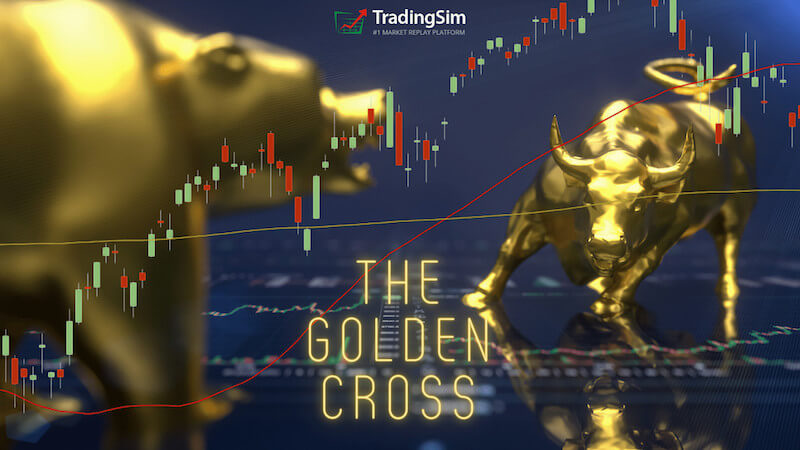 In this article, we’ll uncover one of the most important and popular setups using moving averages – the golden cross.

We’ll provide an explanation of the signal and then dive into three trading examples.

What Is a Golden Cross?

A golden cross occurs when a faster-moving average crosses a slower moving average. Sounds simple enough right? However, the key point is the moving averages which constitute the cross, and the direction in which they cross.

Specifically, you need the 50-period and 200-period simple moving averages. Anything other than these two periods and it is not a true golden cross.

What this tells traders and investors is that momentum could be changing when the cross occurs. When the speed of the upward movement in a shorter time-frame is faster than the longer-term speed, that’s taken as a sign that investors might want to buy.

That is, with high trading volumes and higher trading prices, the golden cross is possibly a sign that the stock market, and individual stocks, are poised for recovery.

What are the three stages of a golden cross?

There are three stages of a golden cross.

Is a golden cross a sign that investors should buy?

Golden crosses are not a guarantee of a bullish future in the stock market. Ari Wald is head of Technical Analysis at Oppenheimer & Co. He doesn’t see golden crosses as an absolutely bullish signal for the markets.

“All big rallies start with a golden cross, but not all golden crosses lead to a big rally,” he says.

Brian Shannon is the founder of AlphaTrends.net. He also agrees that golden crosses are not a definite timing signal to buy.

According to Shannon, “They tend not to be timing signals, but more for confirmation of a move that has been in place.”

In contrast, Jon Boorman sees golden crosses as good trading indicators. However, he also advises caution for investors as well.

“They’re perfectly valid, but people treat them all as individual trades rather than being part of a system. If you’re going to take one trade, take them all. You can’t pick one and then when it doesn’t work say ‘so much for that’. It’s an absurd thing for short-term traders and business TV to take notice of,” said Boorman.

“Just like any trend-following system, it will have plenty of whipsaw losing trades, but the winners will more than make up for those. It’s easy to pick holes in it, but very few have the discipline to execute it. Which is why it works,” added Boorman.

Is the golden cross an indicator of a bull market?

While financial analysts are skeptical about the golden cross being the start of a bull market, there is data to support the belief that it could be a good indicator. Schaeffer’s Senior Quantitative Analyst Rocky White found that there were gains in the stock market after a golden cross.

White found that the S&P 500 had healthier returns a few months after the first golden cross.

“For instance, the index has averaged a three-month gain of 4.07% after a golden cross, and was higher more than three-quarters of the time. That’s compared to an average anytime three-month return of 2.12% since 1950, with a positive rate of just 65.9%,” said White.

“On Thursday, the S&P 500’s 50-DMA crossed above the 200-DMA . Such is known as a “Golden Cross” and has now happened 25-times over the past 50-years. The long term performance of the S&P 500 following such an occurrence is unabashedly positive,” said Marcus.

The above chart of $TSLA displays a classic golden cross trading example. The blue line on the chart is a 50-period SMA and the red line is the 200-period SMA.

The chart begins with a strong downtrend, where the price action stays beneath both the 50-period and 200-period SMA.

Suddenly, the direction of the trend changes and price begins making a move to the upside. Naturally, the 50-period SMA reacts faster to the price change as it has a greater sensitivity to the most recent price action.

Once the 50-period SMA crosses the 200-period SMA to the upside, we have a golden cross.  We have highlighted this in the grey circle.

The profit potential will depend on the stock and the setup going into the trade. Sorry to be so vague, but that’s the reality of trading.

One option is to wait for a cross of the 50 back below the 200 as another selling opportunity. The only issue with this approach is you are likely to give back a sizeable portion of your profits since moving averages are a lagging indicator.

Here is an example of the “Death Cross” after riding a nice gain in Chipotle (CMG).

Notice that the sell signal comes as the market was already plunging. While you would have still had a nice gain, you must be ok with not “selling at the top.”

What you can also do is look for areas of resistance overhead which will act as selling opportunities for longs that have been holding the stock for a long period of time. Typically, bag holders from higher prices will be glad to get out at break-even.

Here is an example with CMG. We took the daily chart Golden Cross entry from above, then flipped to a weekly to see the target areas. Notice how close the exit would have been to the death cross still circled.

A caveat to this strategy is that the stock may consolidate and push higher. You may want to hold part of your position and consider a potential breakout from the prior resistance area.

If the golden cross is real, the signal will likely generate a strong buying opportunity. You can then use the first couple of reactionary lows to create an uptrend line. You then hold the stock until this trendline is broken.

Let’s look at an example of this below.

Here we have a bullish golden cross stock pattern when the faster SMA on the chart breaks up and through the slower SMA in a bullish direction.

This is the same type of golden cross trading signal from the previous chart. However, this time we demonstrate the strength of the signal and the potential run a stock can make after a golden cross materializes.

If you don’t want to wait for the 50sma to break the 200sma on a death cross, you could have taken gains on the trend line break.

In this particular example for NVR, the stock went on a 100% run in 7 months.

Not a bad 7-month return for all you swing traders out there!

3 Strategies for Trading the Golden Cross

Strategy #1 – Look for Setups After a Long Down Trend

All golden cross setups are not equal. One method you can use is to wait for a stock that has had a long sustainable downtrend and then look for a stock that is ready to make a move higher.

There is so much bearishness in the stock that the signal has tremendous significance as a reversal.

The power of this signal is that the cross happens after a multi-month downtrend. By having such a long bearish trend, in order to get a bullish cross, there has to be a basing period. This basing period is the battle between the bulls and the bears.

Therefore, once the stock breaks to the upside, you know there is juice behind the move.

You can buy that initial breakout after the base, but realize you could still be in the thick of a bear market, so don’t get married to the stock. Look for opportunities as the stock rises to secure your gains.

At times the averages will have a wide spread. This will present a cup-and-handle-like formation of the averages. On the surface, it’s going to look really bullish.

However, if you look at the price action, you will notice the pattern is unhealthy. First, the price is shooting straight up. What happens when a stock goes parabolic into a strong primary trend? It usually reverses.

What does this chart example teach us?

You cannot ignore price action. Parabolic reversals should be treated with caution. This is especially true when you have a large overhead gap acting as resistance.

For these types of golden crosses, you may want to avoid them. While it might be considered a valid golden cross, there are better opportunities in the market with smoother, less volatile entry signals.

So, what’s the trade here? Well, there isn’t one.

As traders, we have to remember that sometimes the best action is no action at all.

The last strategy we will cover combines the double bottom chart formation with the golden cross.

Here is the setup.

The below chart illustrates this formation.

The golden cross is a powerful trade signal, but this does not mean you should buy every cross of the 50-period moving average and the 200.

You will need to bring a higher level of sophistication to the setup, to ensure you are buying into a trade with real opportunity.

Tradingsim is the best market replay platform on the web. You can cycle through thousands of charts and replay the data to see which golden cross setup works best for your trading style.

The rounding bottom pattern is a technical setup for the patient trader.  This is because the pattern can take quite a bit of time to develop before any significant price moves begin. In this...

Swing high and swing low; you might have heard the term being used many times, especially among day traders. If you have been confused by what this term means, then this article will explain what...