ETFs or Mutual Funds – Which is Better for Long-Term Investing?

Beside stocks, mutual funds and ETFs are two other common ways to invest. Although both these investment products track the underlying stocks, they offer a bit of diversification for the investor and are built to suit different investment goals and trading needs. In a way, both mutual funds and ETF’s are products from the same basket and choosing one over the other comes down to what one expects from the markets. Both ETFs and mutual funds trade for the purpose of making money for the investor and thus the end result is the same. An ETF or a mutual fund does not automatically genera

te higher returns than the other and this is something that investors need to understand beforehand.

10-year returns comparison between a mutual fund and ETF

The above chart illustrates a 10-year return between mutual funds and ETF based on a hypothetical $10,000 investment made over a period of time which shows that in terms of returns, an ETF or a mutual fund tends to perform similarly.

The best way to know which of these two products are better to invest, here are some key differences between ETF and mutual funds.

A mutual fund is also known as a collective investment vehicle or a product which is formed after investors come together for a shared financial goal. The money that is pooled via the mutual fund is then invested in the equity markets. Mutual funds come in different forms, but they are primarily called equity mutual funds or debt mutual funds. These funds are actively managed by the fund managers with the purpose of beating the market index.

An exchange traded fund also operates similarly to a mutual fund in terms of the pool of investments, with the exception that the ETF is open ended and can also come in different themes such as index trackers, sector trackers or select stocks. Because the ETF’s are also listed, they can be traded similar to stocks. ETF trading is also a lot more flexible alongside other benefits such as taxes, making it one of the more popular investment tools compared to mutual funds.

The above two examples shows how the returns from both the sample mutual funds and ETF’s have had some positive returns on a year to date basis and even in the long term such as a 13% and a 21% return on some mutual funds over a 5 and 10 year period. Although the above mentioned ETF’s do not have the same type of returns, there are some high growth ETF’s as well that specifically focus on investing in growth oriented companies, thus putting the returns, on par with mutual funds.

To invest in a mutual fund, the investor needs to fill out a form after which the account is open with the fund. Once the money is transferred to the custodian bank, the investor is issued shares of the mutual fund. The mutual fund manager then purchases shares in the stocks or other assets via stock brokers and other institutions. After the orders are filled, the amount is deducted from the mutual fund account. The shares are held by the mutual fund which is the new owner and can be stored physically or electronically. In case of any dividend paying stocks, they are passed on straight to the mutual fund, which then disburses them to the fund holders.

The mutual fund manager is compensated by being paid a commission of the total funds being managed.

A mutual fund operates as either an open-ended fund or a closed fund. The most popular type of mutual funds is open-ended mutual funds. In this type, investors can freely buy and sell to the fund and there is no limit on the number of shares that are issued. The fund’s price per share is adjusted on a daily basis to reflect the changes in the fund’s net-asset-value. Closed end mutual funds issue only a specific number of shares and the price of the shares are not determined by the NAV, rather the purchase or sale is made a premium or a discount to the NAV.

In many instances, the issuers of the mutual fund also operate exchange traded funds. Examples include Vanguard Group, Franklin Templeton Investments and so on.

Vanguard and Fidelity are just some of the companies that offer no-load mutual funds as well.

Difference between ETF and Mutual Funds

ETF and mutual funds are quite often used in the same context as an alternative to investing in individual stocks. Fundamentally both these products are quite different. ETF offers quite some advantages over the traditional mutual funds because they trade on a stock exchange. This also reflects the ETF’s net-asset-value or NAV which is closer to the NAV of the ETF and this eliminates the risk of price differential between the time one invests and the time the trade is placed.

ETF is traded on a stock exchange and thus you buy it from someone else in the market, unlike mutual fund where you buy it directly from the fund issuer. In other words, there is no secondary market in mutual funds, but there is a liquid secondary market for exchange traded funds. This partly represents the fact that ETF’s trades similar to a stock.

While this is a benefit for the ETF, the amount of ETF shares you buy is up to the investor or the trader. Therefore, if an exchange traded fund trades for $30, you could buy just one or even a 100 or one-thousand. Mutual funds on the other have a minimum purchase requirement that is set by the fund itself. This can change from one mutual fund to another and the minimum amount is set at the sole discretion of the fund house or the fund manager.

Another advantage of trading exchange traded funds is that they can be traded similar to shares, meaning that you can buy and sell ETFs the same (day trade ETFs similar to stocks) without any restrictions. This is not the case with mutual funds however as you cannot buy and sell them in the short term.

All exchange traded funds have an expense ratio and this is smaller compared to mutual funds, making ETFs a better product for day traders.

The table below gives a summary of the differences between an Exchange traded fund and a Mutual fund.

In terms of conducting any technical analysis, it is a lot simpler to do this with an ETF because they trade similar to a stock. Given that in most cases, some of the popular ETF’s are very liquid, investors can also take a quick glance at the technical aspects before committing their funds for long term investing.

The chart below shows an example ETF SPY which is the SPDR, S&P500 exchange traded fund that tracks the returns on the S&P500 by investing in S&P500 listed companies. 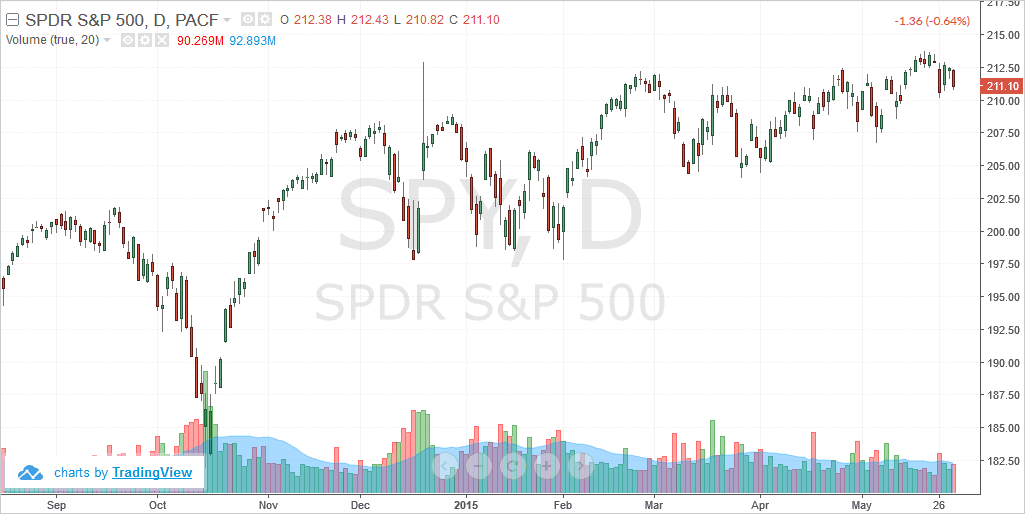 One of the reasons for higher taxes among mutual funds is because the fund manager has to constantly rebalance the portfolio in the mutual fund by selling or purchasing securities to account for shareholder’s redemptions or allocation of assets. On the other hand, with ETF’s the investment inflows and outflows are based on creating or redeeming the creation units, this eventually  leads to the investor not being exposed to the capital gains on the securities in the underlying structure.

An ETF is said to be an extension or an evolution of a mutual fund which has been around since decades. For long–term investors, mutual funds have always remained the cornerstone of their portfolio, although more and more ETF’s are making inroads into an investor’s portfolio. In terms of fees and expenses, a mutual fund no doubt has higher charges compared to an ETF, but on the other hand, it allows for hands off investing once you select a mutual fund. ETF’s are more inclined to be used by active investors who want a lot more flexibility and freedom to move their money around.

While it is difficult to answer the question as to whether an ETF investment is a better alternative to mutual funds or vice versa, it comes down to the investor’s risk profile and their investing goals. As outlined in this article, there are some clear distinctions between an ETF and the mutual fund, which is something that investors need to fully understand in order to decide where to invest. At the end of the day, investors to bear in mind that simply choosing an ETF or a mutual fund will not automatically guarantee them long term profits as there is a lot more research involved in picking the right ETF or a mutual fund.