When the price of coffee futures fell more than half from the peaks of $137 in August 2015, the benefits of lower coffee prices were passed on by most of the merchants.

Starbucks was however the exception, as the company back in 2015 was reported to have hiked the prices of coffee.

While Starbucks did not have much of competition initially, in the past few years, that has changed. Companies such as McDonalds, Dunkin Donuts have started to give Starbucks a run for its money. Keurig Green Mountain Inc (GMCR) is one of the other big names that has an exposure to coffee. Unlike Starbucks, Keurig Green Mountain Inc. is a specialty personal beverage system producing coffee, coffee makers, tea and other beverages in the U.S. and Canada.

Starbucks has become the go-to coffee place, be it for work or just to socialize. The marketing approach and the concept has led to the company’s revenues growing consistently year over year, with 2016 revenues estimated to have been at $21.32 billion. 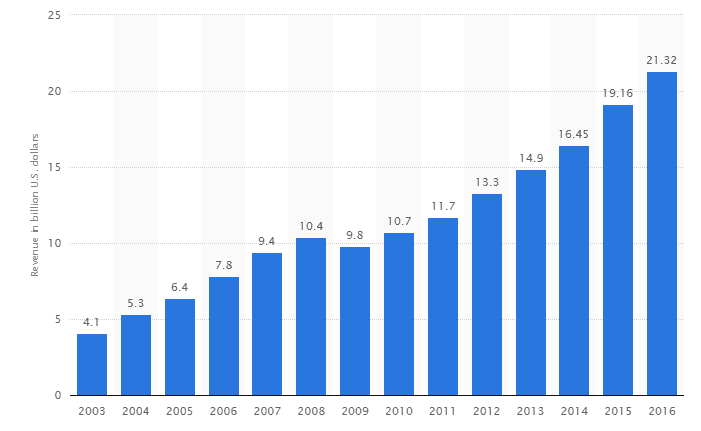 Previously, coffee futures posted a strong rally as a buildup of various factors such as drought and rust in some of the major coffee producing regions led to fears of lower output. This in turn pushed prices of coffee futures higher.

Coffee rust, known as la Roya is a type of fungus that is no newcomer to the crop. The fungus played havoc in 1860, in Sri Lanka as it nearly destroyed all of the coffee and tea plantations in the region.

Thus, the weather and disease factors played a role in pushing the price of coffee futures higher. However, as conditions started to improve and coffee futures prices started to tick higher. But in terms of the benefits, as far as Starbucks was concerned, there has been little to show for.

Since coffee forms an essential element of the Starbucks business, the influence of coffee prices and the stock price of Starbucks is often a favorite pastime for many.

Starbucks is known to hike prices of its products at regular intervals. In July 2016, the company hiked the prices by $0.10 – $0.20 on select brewed coffee as well as tea products. The chart below shows the overlay of the Starbucks (SBUX) stock price chart on the IC Futures Coffee chart (KC).

While it does seem simple to draw up some conclusions comparing coffee futures prices and the stock price of Starbucks, the relationship between the two are not as simple as it looks to be.

Despite rising prices for coffee, a report from Bloomberg, late last year showed that U.S consumption of coffee continues to rise at record highs. 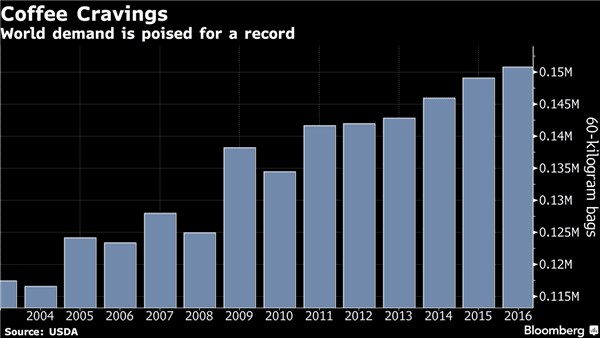 The U.S. per capital consumption of hot coffee was said to have risen to 3.1 kilograms in 2016, up from 3 kilograms in the year before. The total domestic coffee consumption is said to be up 1.5% over the 12 months starting October 1, 2017, data from the U.S. Department of Agriculture said.

The price of coffee futures has increased tremendously in recent years as the drink has grown to become popular both among consumers as well as an important cash crop.

This is mainly due to the fact that big companies such a Kraft, Nestle, P&G prefer purchasing Robusta coffee than Arabica. On the contrary, Starbucks uses Arabica coffee beans

Between Robusta and Arabica, it is widely accepted that Arabica beans are better tasting than Robusta as they are mild and aromatic. Robusta on the other hand is said to be harsher and are said to have more caffeine than Arabica.

Among the different factors that influence the prices of coffee, geo-political factors ranks quite high. This is due to the fact that coffee production is often concentrated in regions where political stability is often not one of the strong points.

For example, as of 2016, the top five coffee producing nations in the world were; Brazil, Vietnam, Colombia, Indonesia and Ethiopia. Most of these countries often witness political turmoil and these factors tend to add to the uncertainty when it comes to the crop’s exports.

Furthermore, the regional disturbances can have an influence on the export prices as well which could eventually translate to higher coffee prices in the international markets.

Very often, climate plays a major role and many a times is directly responsible for sending the price of coffee futures higher, especially as speculators start to push prices higher on negative news related to plantation.

Global warming is another major role that has resulted in unfavorable weather conditions. Brazil, which is the world’s largest coffee producer, has been hit by changing weather patterns. In 2014, prices of coffee futures rose sharply on an unprecedented drought. Rainfall is essential in the early months of crop plantation and is often used by market participants to gauge the estimates of production.

Speculators are traders who are not concerned about production or delivery aspect of trading but purely focus on profiting from the volatility in prices. Besides speculative trading activity, enterprise demand also influences the price of coffee futures.

Companies such as Kraft, P&G, Sara lee, Nestle are said to be some of the biggest consumers of coffee at an enterprise level. Thus prices tend to be more volatile and push higher on increased demand from these companies. Interestingly, Starbucks doesn’t fall into the category of “the big four” coffee roasting companies.

In the world of futures, coffee is primarily traded on the ICE Futures Exchange. The coffee version being used on the ICE futures exchange is the Arabica futures with the ticker symbol C or KC.

The coffee futures prices trade in contract size of 37,500 pounds and the futures are priced in cents and hundredths of a cent up to decimal places. The minimum price movement of the ICE futures contracts at 5/100 cent/lb with the tick value of $18.75 per contract.

The ICE futures contracts are listed for March, May, July, September and December contract months.

The CME group also offers its own version of coffee futures with the ticker KT. The CME group’s coffee futures are also standardized in contract sizes of 37,500 pounds per contract which is priced in U.S. dollars and cents and has the same contract listed months as that of ICE futures.

The CME group’s coffee contracts have a minimum price fluctuation of $0.0005 per pound with the tick value priced at $18.75 per contract (similar to the contracts from the ICE Futures).

Between the two, the coffee futures (KC) from ICE futures are the most widely quoted and used as a benchmark when it comes to the Arabica coffee prices.

Does coffee futures price impact the stock price of Starbucks?

To a certain extent, the price of coffee futures plays an important role in determining the bottom line prices in Starbucks. Because Arabica coffee is one of the main inputs into the business, there is a certain amount of impact that coffee prices have on the revenues from Starbucks’ businesses.

It is estimated that coffee prices form as much as 20% of the company’s cost of sales or input costs, which was revealed by the company CEO, Howard Schultz in 2014.

Being one of the largest coffee chains, Starbucks has had an impressive run. In a three year period, Starbucks has consistently outperformed the S&P500 returns, while at the same time, the ICE futures Coffee has been posting a steady decline.

The above chart shows that there is a mild inverse correlation between coffee prices and the stock price of Starbucks. Thus, when prices of coffee futures (Arabica) fall, you can expect to see a modest increase or an improvement in the share price for Starbucks.

Traditionally, the common knowledge dictates that when the prices of coffee futures rise, it translates to higher costs of doing business for a company such as Starbucks. This means that the stock price of Starbucks is expected to fall.

While this inverse relation exists, it is a lot more accentuated on a daily time frame chart which shows the strong inverse correlation between the stock price of Starbucks and the price of Arabica coffee futures.

Thus, when coffee prices are trading lower, the stock price of Starbucks tends to appreciate. Similarly, when there are higher coffee prices, the revenues in Starbucks also take a hit.

But the question here is in regards to how the relative rise and fall in the shares of Starbucks. Because the company does not base its pricing on current or prevailing price of coffee that it purchases, the stock price can weather any short term impacts from higher coffee prices.

Within this same period however, the stock price of Starbucks fell only 12%. Furthermore, the correlation isn’t exactly symmetric as one can see that during the rally in coffee prices between 2009 through 2011, where coffee prices rose from around $104 to reach the highs of $290, the stock price for Starbucks was also growing steadily showing no signs of declines.

Thus, it is safe to assume that while coffee prices form nearly 20% of the input costs for the business, it is still too low to have any major impact for the business. Past price history shows that the stock price for Starbucks has managed to weather both the upturns and the downturns in coffee prices.

When price of coffee futures rises, the input costs for the company also increase, thus putting pressure on the eventual revenues.

One of the ways to gauge what impact coffee prices have on Starbucks is to read the quarterly earnings report, where the company gives out details on its coffee hedging strategy. For example, in the earnings report, the company said that it had over 50% of price locked for the fiscal year of 2017.

The comments signal that the company was purchasing coffee at a slower pace than before despite falling coffee prices as the company is known to take a very cautious approach when it comes to sourcing the highest quality coffee beans while also keeping an eye on fair economics.

While there is some form of inverse correlation between coffee futures and the stock price of Starbucks, the strength of the correlation is not too strong to base any investment decisions from it. What we do know is that when coffee prices exhibit strong rallies, the pace of gains in the price of Starbucks stocks tend to rise at a slower pace.

How Well Do Pre-Market Futures Define the Day’s Range?

One of the biggest advantages of futures trading is the fact that the futures markets are open nearly 23 hours a day. This continuous market allows traders at all levels, and even from different...

Cocoa is the fermented and dried fatty seed from the cacao tree. It is one of the main ingredients from which chocolate is made but other versions of cocoa include cocoa powder made from grinding the...

7 Things You Must Know About Coffee Futures

In the developing countries, coffee futures, when measured by monetary volume is estimated to the second most popular commodity that is traded, only next to crude oil as a source of foreign exchange,...