Black Tuesday refers to the fourth day of the U.S. stock market crash in October 1929, which started on October 24th, the week before on a Thursday which is also known as Black Thursday.

Black Tuesday 1929 stands out as it marked the end of the 4-day rout which wiped off nearly $14 billion from the New York Stock Exchange (NYSE).

The stock market crash in 1929 was the climax to the previous years of solid economic expansion in the United States. In the early 1920’s the U.S. economy was booming and peaked around August of 1929.

The growth in the economy led to a strong surge in the stock markets fueled by wild speculation which was met by a cataclysmic bust by October of 1929.

While each day of the week starting since Black Thursday was given a name, Black Tuesday stands out as it marked the start of a long a tumultuous time in the stock market’s history and led to the Great Depression.

Incidentally, just the previous month, in September 1929, the London Stock Exchange crashed as a result of some of the efforts made by some bankers who wanted to instill confidence among investors.

President Calvin Coolidge had ironically delivered his State of the Union address in 1928 where he said that Americans had never “met with a more pleasing prospect than that which appears at the present time.”

It was a booming time for the economy with the Dow Jones Industrials rising rapidly between the periods of 1924 through 1929 and it was considered to be the longest bull run of its time. The Dow Jones was trading around 75.00 prior to the start of the bull-run and by 1929 August, the Dow hit an all-time high of the time at 380.33, all in a span of eight years.

The euphoria of the time was perhaps well entrenched in the words of Irving Fisher, an economist who announced that “stock prices have reached what looks like a permanent plateau.”

To understand what caused Black Tuesday, one must go just a few weeks prior to this Black Swan event. In the run up to September 1929, real estate industry was booming as property prices continued to rise steadily.

By 1925 it is estimated that the value of the real estate market peaked and price started to decline as a result.

This led to a chain reaction which eventually culminated in stock market crash of October 1929 and triggered the Great Depression. Due to the close correlation with the real estate and the U.S. equity markets, when the real estate market starts rise, the stock market also follows.

The rise in the real estate values led to many investors being attracted to the stock market, which evidently was in one of the largest bull markets of its time. Even investors who did not have money began to borrow to speculate in the stock market. 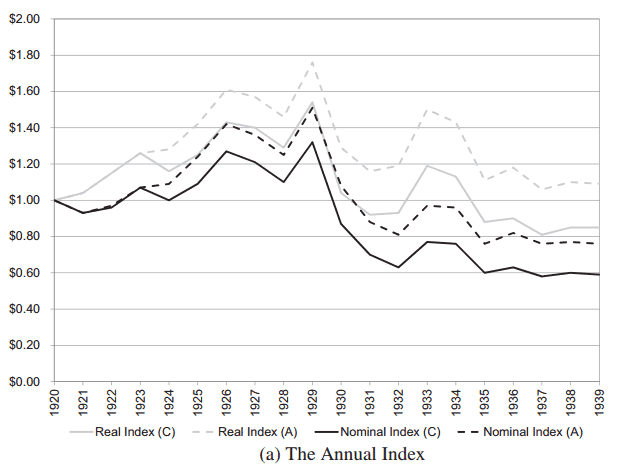 Brokers, on the other hand were more than willing to lend. Some even went so far as to finance two-thirds of the stock’s value when being purchased. The heavy lending led to nearly $8.5 billion being given out in loans, purely to speculate on the stock market.

Incidentally, this amount of debt was more than the total amount of currency available at the time. Furthermore, there were no strict banking laws in place, so commercial banks resorted to using customer deposits to lend to speculators.

As the stock market continued to push higher, the urge to borrow more and invest only grew. This steady pace of lending and speculation led to a bubble in the stock markets, which eventually popped in September 1929.

At its peak, the price-earnings ratio was 32.6, a historical high of its time.

Around the same time during the stock market boom, Charles Mitchell who became the president of the National City Bank (now called Citibank) also pushed for his bank to sell securities and stocks. He was elected as the president in 1921 and under his leadership, the bank expanded strongly by 1930.

During his tenure, Charles Mitchell encouraged his salespeople to sell shares which totaled to nearly $650 million. Eventually all this money was wiped out with the Great Depression.

The effort by Federal Reserve Bank which in its part was attempting to curb speculation was met by Charles Mitchell providing a further $25 million in advance to traders.

Indeed, in November 1929, Senator Carter Glass had this to say of Charles Mitchell. “Mitchell more than any 50 men is responsible for this stock crash.”

The Federal Reserve Bank rate hike and the Gold standard

The Federal Reserve Bank was one of the staunchest critics of its time as officials repeatedly talked about the risks of extreme speculation.

The Board made its intentions clear on where it stood on the speculative bubble that was formed, noting that it did not contemplate the use of further resources of the Federal Reserve Bank for creation or extension of speculative credit.

The first step taken by the Federal Reserve Bank was to notify all the reserve banks to stop all requests for credit from the member banks which loaned out funds for speculators.

In an effort to stop the excessive lending that still continued, the Federal Reserve Bank finally had to raise the discount rate, which automatically raised the rates that borrowers had to pay including the consumers who borrowed money from the banks.

Once rates were hiked and due to the fact that the U.S. dollar was still pegged to gold, many international banks had no choice but to hike interest rates as well.

As monetary policy became tighter, recession gradually started to trickle into the international markets which led to a decline in commerce and trade.

In the U.S. however, the speculation continued but by September the stock market was showing signs of exhaustion. Just the previous month, the Dow Jones closed around 380 marking an all-time high.

As investors watched, the stock market started to become volatile. By October, Charles Mitchell and a coalition of other bankers wanted to instill market confidence and publicly announced purchasing shares which were already at high prices.

The theatrics failed to impress investors as the stock market tumbled.

2 – What happened on Black Tuesday?

After touching highs of 381.17 the Dow Jones Industrial Average began to fall rapidly, losing 17% initially before managing to recover some of the losses. But this bout of optimism lasted only for a week before price started to reverse and fell sharply which led to Black Thursday, October 24th.

To stem the initial bout of declines, Richard Whitney, the President of the New York Stock Exchange publicly announced that he was buying some blue chip stocks.

Backed by several of the most prominent banks, Whitney purchased large amounts of U.S. Steel stock at higher than market value. He then proceeded to purchase smaller amounts of other normally stable stocks.

The hope was that by showing faith in these industries, the sell-off would slow down and perhaps even halt, much like it had during the Panic of 1907.

While Whitney’s efforts helped to calm the nerves, by Monday, October 28 investors woke up realizing that banks were buying back the stock. This led to a massive selling as investors began to unload their shares in an effort to exit the market.

The Dow Jones lost close to 13% on the day and the sentiment only worsened by Tuesday. On Black Tuesday, over 16 million shares were traded, most of them being offloaded by investors.

The record number of shares that were transacted on Black Tuesday set a history that remained intact for nearly 40 years, until it was broken in 1968.

The above price chart for the Dow Jones industrial average shows how prices reacted to the unfolding events on the ground. As you can see, there was some recovery on Friday but by Monday, stocks began to be sold.

Black Tuesday marked the end of the stock market rout in some ways as the Dow Jones pulled back higher on Wednesday and Thursday. But by Friday, the selling was back in fashion.

3 – How did black Tuesday cause the great depression?

Within the four days, the Dow Jones fell nearly 25%, causing investors to lose nearly $35 billion, and relatively it was estimated to be ten times more than the U.S. Federal budget that year. While everyone talks about Black Tuesday, the stock market rout did not end there.

The Dow Jones industrial average continued to fall steadily since then and price bottomed out around July 1932. In total, the stock market was in bearish territory for nearly three years after Black Tuesday.

As the stock market began to tumble, it also took a toll on the economic confidence, which eventually turned a recession into the Great Depression.

Consumers took a step back from excessive purchases as some of the had lost their savings deposits with the banks which had lent money recklessly. Automobiles, which were in demand during the day saw their sales decline rapidly, which led to a slowdown in production and eventually layoffs.

This chain reaction led to a steady increase in the unemployment rate and the U.S. economy began to contract. Despite the consumer confidence taking a beating, there were signs of recovery just a year later.

However by 1930 – 31 another series of events happened which pushed what could have been a short recession into the Great Depression.

Banks which previously operated with loose restrictions began to face the brunt. Bank deposits were uninsured which saw people losing their savings and losing trust in the banks. As money supply began to tighten alongside the increase in the unemployment rate inventory began to accumulate. At one point the U.S. unemployment rate hit 25%.

In an effort to boost confidence, the government created the Smoot-Hawley law which imposed high taxes on imports from overseas. This led to reduced trade between the U.S. and its trading partners, with some countries retaliating economically.

While financial conditions worsened, the drought that occurred in the Mississippi Valley in 1930 contributed to worsening conditions.

4 – Could Black Tuesday and the Great Depression been avoided?

Academically, the argument for both sides continues with no clear answer. However what is for certain is the fact that speculative behavior by investors, alongside policy actions from the Federal Reserve Bank and the U.S. government in the months after Black Tuesday led to the Great Depression.

Weather also had a role as the timing of the drought that hit the Mississippi Valley couldn’t have come at a more opportune moment.

All these factors led to what was the longest period of depression in the history of the United States.

However, that being said, while the stock market continued to tumble there was recovery in sight by early 1933. Twenty years later, in November 1954, the Dow Jones industrial average finally broke past the previous all time high at 380, just before the start of Black Thursday and the stock market crash.