6 Things You Must Know About Soybean Futures Trading 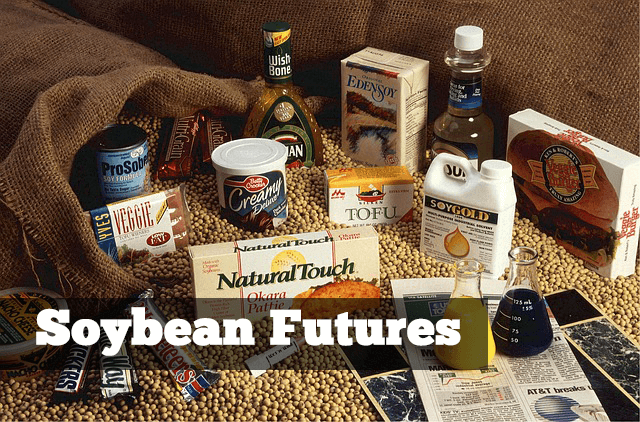 Soybean is an oilseed crop with the primary purpose of extracting the oil contained in the seeds. Other well known oilseeds besides soybeans include sunflowers, rapeseed, cotton and peanuts. But of course, for futures traders, soybeans futures are one of the most popular contracts in this category.

The soybean trade is a global trade and is primarily appreciated in Asia as one of the natural foods. Interestingly, soybean has also found its uses in print, where some publications make use of soybean ink which is an alternative to the common petroleum based ink. When you talk about Soybeans, China can’t be left behind. The nation is expected to become the top importer of Soybeans in the coming years, adding more pressure to the demand side.

What are soybean futures?

Soybeans make up the underlying asset or commodity for the soybeans futures contract. It is an attractive commodity to trade as a hedge for producers with most of the demand now seen from the emerging markets. Therefore, it is not surprising to see that trading soybeans futures make for a lucrative proposition for futures traders.

Soybeans popularity comes from its importance and uses. It is widely used as livestock feed, a substitute for meat as well as a source of oil. It is estimated that the soybean futures prices will rise exponentially as the world’s population increases demand for the product. From a trading perspective, soybeans futures are very liquid contracts and offers tremendous potential to make profits day trading the soybeans futures.

Soybeans were initially farmed in Southeast Asia and mainly from China which has become a net importer and accounts for large consumption of soybeans. It is said that soybeans were first introduced outside of China to its neighbors since the 16th century. It was later introduced to Europe in the 18th century and arrived in North America in 1765. Samuel Bowen a sailor with the East India Company is said to have brought the seeds from China and started growing them in Georgia.

The use of soybeans has changed since the ages. While it was initially used for oil or feed meal it was the funding from Henry Ford that advanced the use of soybeans which branched out into soy-based products including plastics used in cars. Soybeans grew in favor during the Second World War as a substitute for proteins from other sources. In the 1960’s the U.S. removed tariffs on soybean exports from Europe.

The U.S. is said to be a leading soybean producer accounting for as much as 108 million metric tons as of 2014 followed by Brazil at 86.8 million. It is estimated that the total soybean production in the world in 2014 was at 249 million metric tons. In the mid 90’s the U.S. dominated the world’s soybean trade, exporting as much as 90% of the world’s soybean.

Argentina comes in at the third spot with production at 53.4 million metric tons. The top importers are now China accounting for 41% and Europe for 22% of imports. China’s imports of soybeans have been growing exponentially, at an estimated 55 million tons, or about 61% in imports and is expected to rise even more. By 2020, China is expected to increase soybean imports by another 50% or close to 110 million metric tons. 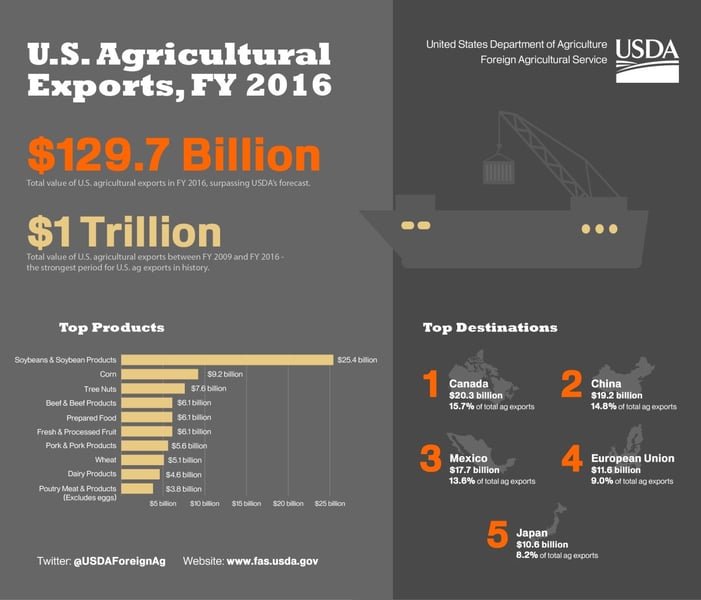 Soybean is the second most planted crop in the U.S. with more than 80% of soybean farming coming from the Midwest. In 2008, in the U.S. 74.8 million acres of land is said to have been devoted to soybean production. The U.S. accounts for 44% of soybean exports and nearly 35% of production as of 2010.

Soybeans futures can be traded on the CME Exchange/Chicago Board of Trade (CBOT) on the Globex electronic exchange or ICE futures. On the CME exchange, there are two versions of Soybeans futures contracts you can trade.

Soybean markets follow a pattern of a fixed cycle production which starts from planting to podding and harvesting. Each of these three stages in the soybean crop development has an influence on the final futures prices as it impacts the supply side of the chain.

When trading soybeans futures, it is important to bear the following fundamentals:

As with most agricultural products, the USDA’s report plays a huge role in setting expectations for demand for soybeans. The USDA’s grain stocks report is published four times a year and contains stocks of soybeans, among other agricultural products. The report details the number and capacity of on and off the farm storage capacity. 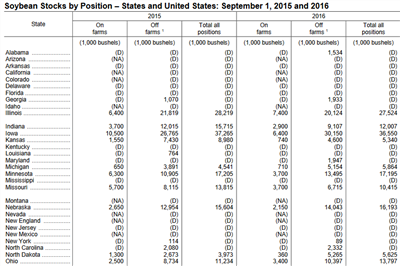 The table below shows the latest soybean futures prices for the different contract months. You can see how the price for March futures is higher than the January contract month, indicating that there is an increasing demand for soybeans and also implying the bakwardation scenario.

In contango, hedgers indicate that they are willing to pay more for the commodity (soybeans in this case) at some point in the future than the actual expected price of the commodity (the spot or the front month prices).

Using technical indicators such as moving averages, traders can find potential trading opportunities when such scenario presents itself.

Due to the fact that soybeans are produced in the U.S. and most of the exports going to China, futures traders can be well equipped to look at the fundamentals and combine the information with the technicals in order to trade soybean futures contracts successfully.

U.S. soybeans futures are one of the biggest exports from the US and are one of the most popular of agricultural futures contracts. With the option to trade either the full soybean contracts or the mini-sized soybean contracts both of which having a reasonable margin requirements, futures traders can look to making decent returns when considering factors such as seasonality, the quarterly reports and other technical factors.