5 Things that Influence the Price of Natural Gas Futures

Natural gas is a flammable gas comprising of methane and other hydrocarbons. It is a naturally occurring gas found underground and is extracted the same as other fossil fuels such as oil. Natural gas finds many uses, from heating to electricity. Natural gas is formed in the same way as oil and coal, where remains of plants and animals over millions of years turn to fossil and eventually become coal, petroleum or natural gas. Due to its gaseous form, natural gas seeps into the large cracks and spaces between the layers.

In its original form, natural gas is colorless, odorless and tasteless. Because of this, distributors add a chemical to give the gas a distinctive smell in order for the gas to be easily detected in terms of any leaks. In its original form, natural gas is drawn from wet natural gas wells, which is mixed with other hydrocarbons and non-hydrocarbon gases. Methane and other gases are extracted from the natural form and processed at a plant.

According to the U.S. Energy Information Administration, over 60% of natural gas is used for electricity generation and industrial usage. Residential usage comes in third at 17%. 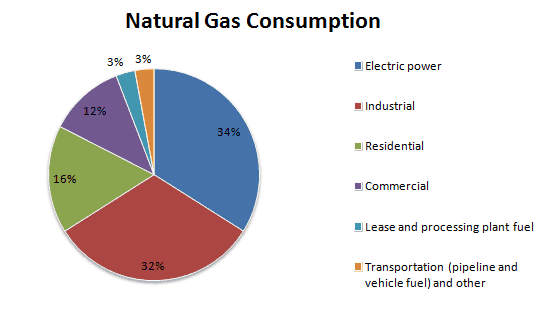 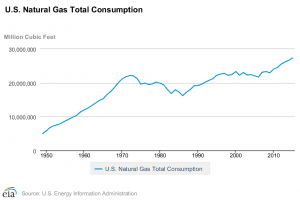 The above chart shows the total U.S. natural gas consumption since the 1950’s which shows that demand for natural gas has been steadily increasing. Within the United States, the state of Texas accounts for the largest Natural gas producer at 14.3%. Other states include California (9%), Louisiana (5.4%), New York (5.3%) and Florida (4.9%).

Canada ranks on the top as the leading exporter of natural gas to the United States, followed by Mexico which accounts for less than 1%.

From the above, we can see that natural gas forms an integral part of the U.S. energy portfolio alongside other fossil fuels such as oil. For a commodity that has a wide reach of its usage, speculators need to understand the factors that play a role in shaping the prices of the natural gas futures.

A typical seasonal chart pattern for natural gas futures is shown below. 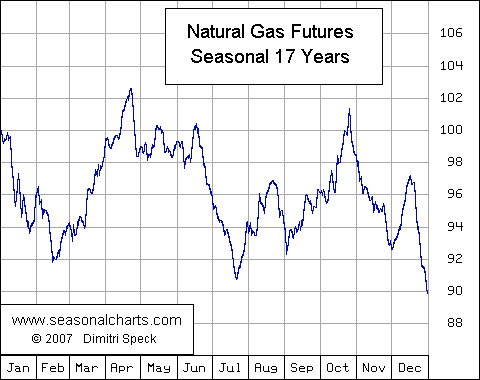 Natural gas futures tend to strengthen from the November months and prices hit the peak around the April – May period. With the onset of spring, natural gas futures prices start to fall from April – May and usually bottom around the July – August months during the peak of the summer months. Thereafter, prices start to rise steadily picking up pace as the winter months approach.

Due to the fact that natural gas is an essential element used in the generation of large scale electricity in the United States, increased demand for electricity often translates to higher demand for natural gas. These anomalies are often accentuated during seasonal patterns of harsh summer months that come every so often and can lead to spikes in prices due to increased demand.

Natural gas is widely used in the industrial and commercial sector as well. Understanding the sector-wise demand plays an important role in figuring out the long term factors that affect the prices of natural gas. To ascertain the long term demand, it is essential to understand the industrial trends and the sectors that make use natural gas as a source of electricity and power generation. This can vary from one industry to another.

The economic fluctuations resulting in the industrial output that accompanies the economy’s up and downswings affects the amount of natural gas used by the industrial sectors.

The above chart for instance shows the weaker prices in natural gas during the 2008 – 2012 years where weak pace of growth in the economy was reflected by weaker natural gas prices during the period.

We know that natural gas futures prices tend to strengthen into the winter months and then turn weaker in the summer months. However, sudden changes to weather patterns can play a significant role that can throw the cycle out of sync. La Nina is a weather event that tends to follow an irregular cycle which primarily affects the equatorial Pacific Ocean. However, this weather pattern tends to play havoc with the U.S. weather system as well. It is estimated that La Nina occurs every 3 – 5 year period but is also known to occur in successive years. The effects of La Nina are usually stronger during the winter months, which can lead to unusually harsh winters. This in turn can see higher than average demand for natural gas for heating purposes which can push prices higher.

As a natural gas futures trader, it is essential to pay attention to the weather patterns. You can get a broad idea of the duration of such anomalies which can give you a better handle on how long demand will remain during the harsh winter periods.

Seasonally, storage tends to increase in April through October in anticipation of higher demand during the winter months while at the same period the demand is low during the early spring through autumn months.

The U.S. EIA publishes weekly natural gas inventories report which gives the build up or drawdown of the natural gas in the commercial storage. This crucial report often moves the natural gas futures prices and can also act as an early indicator on the seasonal demand patterns.

COVID-19 Natural gas ETFs can be an effective investment option for traders. These exchange-traded funds can pay off for savvy investors-if they make the right choices. This TradingSim article will...

The Canadian dollar futures are the futures derivatives product trading the underlying asset of the Canadian dollar. Unlike the spot markets where the price quotation is based on one U.S. dollar, the...

What is the most popular Oil Futures Contract?