Bonds are perhaps the most interesting of all the financial products that are available to trade. In a world that is fuelled by debt, bonds play an important role in shaping the future prospects of an economy or a corporate entity. It is often said that when the bond markets sneezes, the stock markets catch a cold. Savvy investors who have heavy exposure to the equity markets pay close attention to the debt markets or bonds, as they can signal future prospects of either the nation in question or a corporate entity. CME futures introduced bond trading on the 30-year treasury bonds in 1977 and was later expanded to cover the 10-year, 5-year, 2-year treasury notes and the 30-year Ultra Treasury bond futures.

In the world of bond markets, and especially that of the U.S. the Treasury bills, notes and bonds are perhaps the most widely used terms. There are also the derivates equivalent of these in the futures markets such as the 2-year and the 10-year and even the 30-day short term fed funds rates.

The U.S. Treasury bonds and notes represent a loan to the U.S. government therefore bond holders are creditors rather than equity or share holders. Under the bonds, the U.S. government agrees to repay the face value or the principle or par amount of the security at maturity including paying the coupon interest at regular intervals. The treasury securities are often said to be “risk-free” instruments.

The buyer of the treasury can either hold the bond until maturity or it can be sold in the secondary markets prior to the bond maturing. In case of the bond being sold before maturity, the original buyer receives the market value of the bond or the note, which could be higher than or lower than what they initially paid (the face value).

When trading the Treasury futures, bond traders need to pay attention to the futures market they are trading. While both the 2-year and the 10-year seem to be the same products from the bond market category, if you dig just a bit deeper you will find quite a few differences between the 2-year T-Note and the 10-Year T-Note.

The 2-year and 10 year T-notes are part of the bonds or fixed income securities issued by the federal government for the public. Each of these securities are issued in full faith and credit of the U.S. government and used as tools by the government to funds its short term and long term financing obligations.

Types of bonds and the yield curve

Depending on the tenure of the bonds, they are referred to as the following: 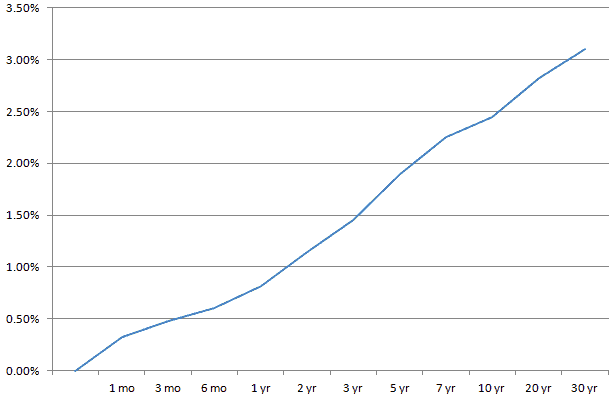 Yield Curve of the U.S. Treasuries

Under fixed income securities, the CME group offers a large portfolio of various debt instruments that can be traded as the futures derivatives. They include ranging from the very short term 30-day fed funds target rate to longer term T-notes. The 2 and 10 year T-notes are part of the various maturities that are available for trading. The futures treasury securities track the cash market of the specified securities in question.

Among the bills, notes and bonds, the intermediate maturing T-Notes tend to be impacted the most by the U.S. Federal Reserve interest rate decisions. This is due to the fact that for example in 2 and 10 years, a lot can happen (interest rates can either continue to rise or could in fact start to fall). On a fundamental basis, in bond investing or trading, the market interest rates and bond prices move in opposite direction, also known as the interest rate risk. Due to this inverse relation, when interest rates go up, (yields on the bonds go up), the bond prices fall and vice versa.

The 2-year and the 10-year T-notes are perhaps one of the most popular and widely traded futures instruments from the CME group. Trading in the futures derivatives can be done either for cash settlement or for physical delivery.

Although the equities are the first place investors’ flock to, the treasuries are a big market and offer a move conservative approach to investing. Bond markets offer liquidity as well as portfolio diversification. Treasuries have a negative correlation to the equity markets and therefore when equities take a tumble, treasuries tend to rally, offering a good hedge against equity risk. However, there are times when the inverse correlation between the bonds and equities remain weak.

The bonds markets are nothing but a measure of interest rates which are primarily determined by the economic condition of the country in question. Therefore, bonds tend to sell off on good economic reports and tend to rally on weak releases, but the relationship is not as simple as it seems as there are a number of other factors involved such as interest rate expectations, inflation, central bank policies and economic growth among other things. The major benefit of trading the bonds markets is the trading hours which are open during the major U.S. economic releases, unlike the equity futures making it possible to trade based off the short term volatility caused by the economic releases. Bond futures tend to be more volatile to the big impact economic releases such as GDP, Unemployment and inflation data which play a crucial role in setting interest rate expectations in the markets.

In conclusion, the 2-year and the 10-year Treasury note futures are one of the widely traded bond futures on the CME group. The ability to day trade the bond futures with relatively low day trading margins allows futures traders to quickly jump into and out of this conservative portfolio of debt instruments. The bond futures are typically volatile into the Federal Reserve’s policy meetings and at times can be fuelled by expectations of planned government spending or fiscal stimulus.

Trading bond futures is however not straight forward and simple as it might be to trade the e-mini index futures for example. Bond futures traders need to take into account a wide range of factors in order to understanding the forces shaping the bond prices. Due to their relatively risk-free nature, the bond futures can also see unexpected volatility during times of market uncertainty. A bond futures trader who is positioned in such markets can reap large benefits by trading the appropriate bond futures instruments.