Fintech is said to be disruptive, because it tends to challenge and change the way business is done in the traditional sense. For example, mobile banking would have been thought impossible a decade ago, let alone making contactless payments. This is nothing but Fintech in action.

Although Fintech has finally emerged to be a big player, many are still oblivious to this new trend with most people’s understanding of Fintech being all about brushing their smartphone against a terminal to execute a transaction or to checking their bank account on the go. These are just a few examples of Fintech in action.

Fintech is commonly used by financial institutions mostly to improve their business, but a major chunk of Fintech has been representing new disruptive technologies in the financial services sector including managing and developing new avenues of payments such as contact-less payments, mobile payments, efficient money transfers, loans and fund raising and asset and wealth management.

For example, it is now quite easy for consumers to get a small loan of up to $1000 from any of the online lenders. This would have traditionally been the bastion of high street banks, but were shunned due to the low level of loans and the high fees for processing these small loans. Fintech companies were able to address this issue by making the process automated. You can now get an online loan approved in just less than 6 hours. Taking this to the next level, the loans are then sold off in the secondary markets what is known as P2P lending where investors now fund more than 80% of these small loans, thus bringing an entirely new market and an investment product to life. This is nothing but Fintech in action!

Although the term Fintech is often associated with start-ups, it also applies to larger businesses. Some of the big names include banks such as Bank of America, Wells Fargo. Fintech also applies to technology companies such as Apple, Google and Facebook who have also contributed in part to creating new payment applications such as Apply Pay and Facebook’s research into its own payment systems.

Then there are Fintech companies that offer infrastructure such as MasterCard or Visa which have moved beyond the traditional cards with magnetic strips to enabling contact-less payments, and exchanges such as Nasdaq which now employ smart technologies that have circuit breakers to halt trading when stocks behave erratically, and finally the disruptors, which are companies such as Prosper (dealing with P2P lending), Moven (retail banking), Stripe (mobile payments).

The evolution of Fintech

Although Fintech has been creating a buzz in the past five years or so, it has been in existence since the 1980’s and is said to have begun with the invention of the pan telegraph by Giovanni Caselli who kick started the operations between Paris and Lyon to verify signatures in banking transactions. By 1950’s Fintech morphed into the creation of the credit card, starting with Diners Club and 1967 seeing the introduction of Barclays bank setting up its first “robot cashier” or what we call today as the automated teller machine (ATM).

The 2009 version 0.1 of Bitcoin is also one of the milestones in the history of Fintech.

At the digital revolution took over, Fintech began to find a lot more practical use in the day to day application of financial services. Starting with risk management to data analysis tools, Fintech initially remained behind the scenes. PayPal, one of the most well known e-wallet payment system was one of the early adopters of Fintech and started to truly transform the way people managed money or conducted business online.

The advent of the Web 2.0 and the emergence of cloud based technologies was just the shot in the arm that was needed for Fintech to surge ahead and all of a sudden, the average consumer was hit by this fascinating new level of service when it comes to finance and money.

To read in more detail about the evolution of Fintech, this article with a timeline by NYTimes makes for a very interesting read.

In which financial sectors is Fintech more active?

Among the different financial sectors that Fintech has managed to disrupt a majority of it has been concentrated in the Lending sector, according to KPMG’s Fintech50 ranking which estimates 14 Fintech companies concentrated in the Lending services. Coming in second with 8 companies is the Wealth sector, followed by Payments, Insurance and Accounting coming in at the remaining spots. 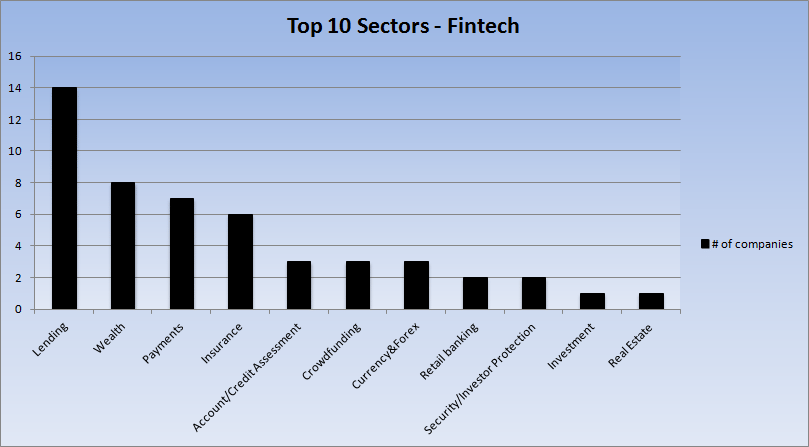 Motif Investing: Motif investing has already been widely accepted as a new way to build and invest in thematic stocks similar to that of an ETF. Motif investing offers low fees for purchasing up to 30 stocks or ETF’s as a basket of investment known as Motif. Motif Investing was started by Hardeep Walia and is ranked #14 as a Fintech disruptor.

EasyEquities: EasyEquities is a South African based Fintech company which offers access to equities and ETF’s listed on the Johannesburg stock Exchange. EasyEquities offers no minimum investment with no additional fees and low trading costs, making investing easy for anyone. The company was founded in 2014.

Tink: Tink is a Swedish Fintech firm that built a virtual bank on top of a user’s existing bank account. Tink is useful for consumers who have multiple bank accounts and allows for easy budgeting and money transfers between the different bank accounts.

Tipranks: Tipranks is a platform that allows investors to make better investment decisions. Tipranks follows some of the widely followed and top rated stock analysts and gives them a rating every time they make a stock recommendation.

One of the biggest gripes with investing has been that it has been largely limited to the domestic consumer base. It is not easy for an average investor to think about investing in foreign markets directly with the exception of perhaps buying ETF’s that track the performance of stocks in a foreign market. Fintech, which has already made investing affordable by cutting the middleman and lowering fees is quite likely to make global investing one of the core themes of wealth investing.

Quite soon, a U.S. investor could use some of their funds to invest in stocks in South Africa, or an Australia investor can buy shares from the Tokyo stock exchange, all at the click of a button on their smart phone app with of course, no restrictions on the minimum balance requirements and more importantly lower fees.

The development of new markets also means that investors are quite likely to see new investment products. Motif investing is quite likely just the tip of the iceberg and P2P investments are already gaining acceptance in an era of low interest rates and the investor’s search for yield.

Robo advisors have already been around. Robo advisors make investing simple by automatic the process of financial advisory services and portfolio management. The algorithm based robo-advisory firms are currently able to leverage AI and investing goals alongside the market products into recommending the right products for the investor to achieve their investing goals.

Robo-advisors are likely to continue to evolve by already combining the plethora of information that is available such as social media and tracking analysts. Some of the online brokerages have already started using Robo-advisors. These include E-Trade’s Adaptive Portfolio, Fidelity’s Go and TD Ameritrade’s Essential Portfolios.

Crowd sourcing investment is likely to see further innovation in the coming years. A research by Massachusetts Institute of Technology already found that crowd sourced investment ideas from social networking and investment based blog networks such as Stocktwits, SeekingAlpha, Twitter, have boosted returns for the average investor.

What was traditionally the playing field of an investor advisor or a Commodity Trading Advisor; the crowd sourced investment sector is likely to eat into the traditional methods that investors have followed. This could mean, expecting the same, if not smarter results at perhaps a fraction of the cost that was previously charged.

Why should you care about Fintech?

Fintech has been and is changing finance as we know it and has already made a big impact in the way consumers and businesses interact. Fintech managed to break ground among the traditional banking sector which has been resistant to change. Although in terms of market share, the Fintech companies are still miniscule compared to banks, the real worry has been what new innovation Fintech can bring to the financial world with the biggest fear among traditional banks being that could be losing their market share to Fintech.

Many industry insiders believe that we have only witnessed the first round of Fintech disruption, (Fintech 1.0) with most of the activity seen concentrated in the lending and payments sectors with a focus on the B2C space.

The activity in the Fintech is only expected to continue increasing over the years as Fintech is touted to not just touch the financial services sector but also every aspect of one’s life. Driving innovation are the new start ups focused on building disruptive technologies which are smart, agile and able to break into the traditional financial institutions. What this means for the average investor is a being able to choose investment products more smartly.

If you have been investing for the past decade or so, it is not that difficult to find how the investing landscape has changed. The advent of Fintech in wealth and investing sectors might seem a bit far-fetched for some but there is a good chance that an investor has already utilized some kind of Fintech powered service at some point already.

While Fintech might be disruptive for the more traditional businesses, as an investor Fintech is more likely to encourage competition which in turn will boost innovation while keeping fees to the bare minimum.

How to Day Trade with Margin

When Should I Sell My Stock?

When should I sell my stock?  If you have been trading for less than an hour you have probably already asked yourself this question.  If we figure out the old adage of buy low and sell high, we could...